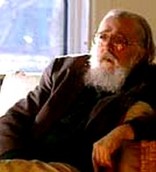 “Now the End of the World is an abstraction because it has never happened. It has no existence in the real world. It will cease to be an abstraction only when it happens--if it happens. (I do not claim to know "God's mind" on the subject- -nor to possess any scientific knowledge about a still non- existent future). I see only a mental image & its emotional ramifications; as such I identify it as a kind of ghostly virus, a spook-sickness in myself which ought to be expunged rather than hypochondriacally coddled & indulged. I have come to despise the "End of the World" as an ideological icon held over my head by religion, state, & cultural milieu alike, as a reason for doing nothing.”