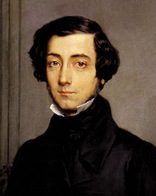 “Our contemporaries are constantly wracked by two warring passions: they feel the need to be led and the desire to remain free. Unable to destroy either of these contrary instincts, they seek to satisfy both at once. They imagine a single, omnipotent, tutelary power, but one that is elected by the citizens. They combine centralization with popular sovereignty. This gives them some respite. They console themselves for being treated as wards by imagining that they have chosen their own protectors. Each individual allows himself to be clapped in chains because that the other end of the chain is held not by a man or a class but by the people themselves.”

30 likes
All Members Who Liked This Quote