The ninth child in a family of restaurateurs, debut writer Julia Pandl can now say she got a book out of her years of "forced" labor, peeling and chopping in the kitchen. Working at the family-owned brunch spot Pandl's of Bayside in Milwaukee, Wisconsin, was both a rite of passage and a nonnegotiable requirement for the author and her siblings from the age of 12 onward. (The bustling local brunch spot operated for 41 years.) Her book, Memoir of the Sunday Brunch, chronicles life in a large family, the crazed pace of the weekend pancake rush, and her deep relationship with her father, who ruled the kitchen with precision. Milwaukee native and occasional stand-up comic Pandl shares snapshots that capture her inspiration for the book. 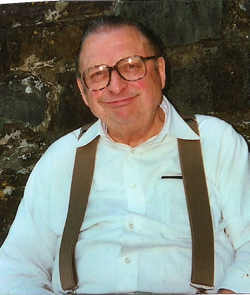 George Pandl, the author's father, "taken in Italy, about six months after my mom died. That smile right there, that 'life is bittersweet' look, is what I was trying to capture in the book."
Goodreads: After 15 years working in the family restaurant, what motivated you to begin work on this memoir?

Julia Pandl: I always wanted to write, and I knew early on that my father was character worthy of a book. I tinkered around with the brunch stories for years. My desk drawers were full of notebooks and scraps of paper. But I could not seem to lock myself down and just do it. Then in 2007, my father died. I assumed all along that he would be around to read it, but I waited (read: procrastinated) too long. Sadness, grief, and frustration turned out to be powerful motivators for me.

GR: What was your favorite dish of your father's? Over the years did you reach his level of culinary prowess?

JP: That's a tough one, because truthfully the food we ate at the restaurant was much better than the food we ate at home. I think I have to go with his red cabbage. Absolutely hated it as a kid, but the older I got, the better it tasted. It was perfectly sweet and sour...and pretty. When I see it on a menu, which isn't that often, I order it in his honor. His is still the best.

GR: As the baby of nine siblings, you either won the birth order lottery or lost it. How did you survive as the youngest in such a large family?

JP: I guess, as the youngest, I learned at an early age to be brief and talk loud. I also learned how to run and hide. I honestly don't know how we survived. I discuss this with my siblings all the time, and none of us know. Our parents were not big on supervision. The birth order lottery is an interesting thing. I believe everyone won in our family. They may not have been big on supervision, but Terry and George had a way of making all of us feel special. 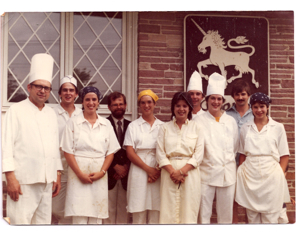 The Pandl's brunch team.
GR: You self-published in 2010, selling 2,000 copies under your own steam, and the book is now newly available through Algonquin Books. Can you describe your path to publishing?

JP: I started out hell-bent on going the traditional route—finding an agent and landing a publisher. Then I heard a woman from Milwaukee—Karen McQuestion—speaking on NPR about how she had uploaded her book to Kindle, and they started selling immediately. I was in the middle of writing a marketing plan for my book proposal, and I realized that either way—traditional publishing or self-publishing—I would have to do a lot of my own legwork. So I added to my plan—first self-publish, then sell 5,000 copies, and then query agents.

I have never been a real "read the directions" kind of gal. So I just kind of plowed forward and learned along the way. Right around the time I hit 1,500 copies (I was never without a box of books in the trunk of my car), my agent found me! After that, Algonquin picked it up. And I've been working with the wonderful folks down in Chapel Hill ever since. I only pretended to know what I was doing, so it's a huge relief to be working with people who actually do know what they're doing. Honestly, the do-it-yourself method is exhausting. 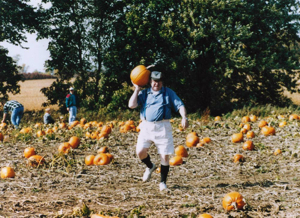 George Pandl in the pumpkin patch.
Patience has been the key for me. I have never been a patient person, but for some reason, with this book, patience has come. I think it's because I'm finally doing what I love.

JP: Well, as I write this, I'm staring at a pile of notebooks and scraps of paper. Book two is in there somewhere. If I have one special talent, it's seeing humor where most people don't and being brave enough to write it down and put it out there for people to read. So far it has served me well. I'm hoping to mine that talent further in my second book.

GR: Would you recommend going into business with family members?

JP: Sure. I would also suggest getting a therapist.

I lived in Milwaukee for a lot of years and going to Pandl's for brunch for such a treat. It was where you took visitors. The scenery was amazing and the food -- OMG!! I had heard Mr. Pandl was a character. I ordered this book from my library when I first heard about it a couple of weeks ago and I hope it comes like now!!

Fantastic book. Cried a lot and laughed out loud. Anyone who has worked for their parents can probably relate. I couldn't out this book down.
Char

Thanks, Char! I am dying to read this.

Absolutely loved this book. I was completely enamored with the logistics of the family. This is truly a must read for anybody from a large family full of love, laughter and loss.

I had no idea this book was being written. Very exciting for someone who frequents the famous Pandl's brunch!

I just received a notice from my library that a copy has arrived!! Guess how my weekend is going to be spent? I lived in Milwaukee for a long time and I loved going to Pandl's.

Fantastic book. Cried a lot and laughed out loud. Anyone who has worked for their parents can probably relate. I couldn't out this book down

Fantastic book. Cried a lot and laughed out loud.

Fantastic book. Cried a lot and laughed out loud. Anyone who has worked for their parents can probably relate. I couldn't out this book down

I just received a notice from my library that a copy has arrived!! Guess how my weekend is going to be spent? I lived in Milwaukee for a long time and I loved going to Pandl's.