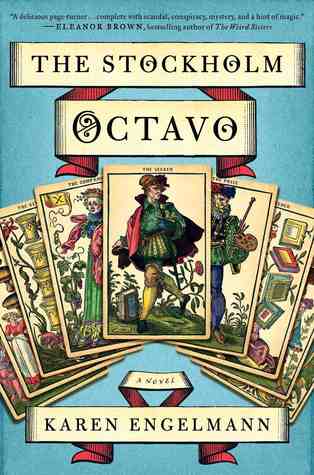 Karen Engelmann's background may be commercial art, but her latest endeavor is novel writing. The Iowa native turned New Yorker previously spent eight years working as an illustrator and designer in Sweden, the inspiration for The Stockholm Octavo, her debut historical novel set during the political upheaval of the end of the 18th century. Her protagonist is Emil Larsson, a bureaucrat and gambler in 1791 Stockholm who must find a wife to keep his job. Fortune-teller Mrs. Sofia Sparrow reads his "Octavo," eight cards for the eight people who will lead him to his fate. As Larsson searches for his eight, revolution comes to Stockholm and a plot unfurls against the King of Sweden. Engelmann shares some of the imagery that sets the stage for The Stockholm Octavo. 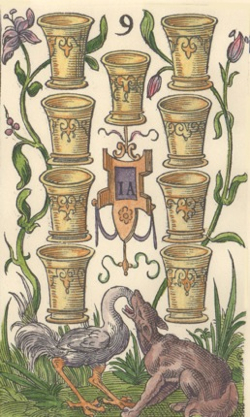 "These are two of my favorite cards from the deck. The 9 of Cups is Mrs. Sparrow's card."
Goodreads: Do you enjoy having your fortune told? And have any predictions come true?

Karen Engelmann: I am not a fortune-teller but have had a number of fortune-telling experiences—from tarot to numerology. Some have been vague, some confusing, some revealing. All of them have been interesting.

One in particular stands out: an astrologist I visited when I was in college. I was studying art and design but taking some classes in the business school. I told the astrologist I might choose advertising as a career. She frowned and shook her head and said that wasn't right for me—I would not find my true path until I was about 55 years old. Of course, at the time this sounded like science fiction. I pursued a career in design and did, in fact, do a stint in advertising (which I found utter misery). But over the years writing had become a passion, and I entered an MFA program. The Stockholm Octavo was my thesis project, and after graduation I set about trying to place the manuscript. Two weeks before my 55th birthday, I found my agent, Amy Williams. Three weeks after, The Stockholm Octavo was sold to Lee Boudreaux at Ecco.

GR: The Octavo is a Tarot-like reading unique to your character, Sofia Sparrow. What inspired your creation of the special methodology she uses in the book?

KE: The inspiration for Mrs. Sparrow's methodology really came from her love of gaming. She was a card-playing fortune-teller from the beginning, but in the first draft of the manuscript the exact method of finding the Octavo was still something of a mystery (to her and to me!). 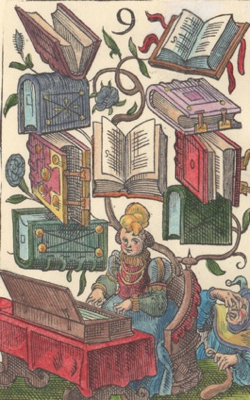 "The 9 of Books is just hilarious and a good reminder to me not to sing in public."
Further research into the history of playing cards revealed that cartomancy came into its own in the late 18th century. I got ahold of several reproductions of antique decks, among them the fabulous Jost Amman cards featured in the book. The Amman deck reveals so much about human character and has numbers, suits, and symbols that can be interpreted in much the same way as tarot cards. They were a perfect tool for Mrs. Sparrow's personal system of divination and the perfect tool for me—I could fit the methods and the forms to suit the story.

GR: History is usually written about kings, queens, and politicians. What led you to the character of Emil, an ordinary man at the center of revolutionary intrigue?

KE: I believe that a part of history has always been made by individuals we know little or nothing about—the "small" people whose everyday decisions change the course of major events. These are the Emil Larssons of the world, the ones whose names do not turn up in the archives. While the spine of the novel is historical, and includes notable people and events of the Gustavian era, I wanted to be free to create a fictional universe. Characters of my own invention could play among the pillars of the historical record and tell an entirely different version of what happened from this "lost" perspective. 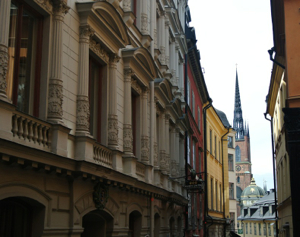 "Stockholm, Gray Friars Alley (home of Mrs. Sparrow). May 2012."
GR: What drew you to this particular period of history in Sweden?

KE: Once I decided to write a novel set in Sweden, the Gustavian Age was irresistible. It's an era that is still discussed, debated, and romanticized. It has drama, humor, glamour, culture, regicide, and revolution. Fantastic ingredients for fiction!

KE: There is a first draft of a novel in a box near my desk that I am about to open and air out. It's a much lighter piece, set in the 20th century, but centers around cards again—greeting cards this time. I am very interested in the point where art meets commerce and also the combination of text and illustration (although it isn't a graphic novel). I thought it was really good when I put it away, but I know better: Large sections of it are sure to stink, and the long and arduous road of revision lies ahead.

I cannot wait to read this book!

I am going to suggest this book for my book club. Will be fun to read and fun to discuss!

This book looks fantastic! I have read tarot cards for years, and love historical fiction. It is a match made in valhalla!

I am fascinated by the many artistic variations of the Tarot and how the cards change with each region and time in history. Thank you, Goodreads, for featuring this author and book. It is now on my holiday list!

Everyone I know gets this book for Christmas!

This is the next book I'll read! Great interview, love the subject.

In The Castle of Crossed Destinies, Italo Calvino sets out to do a Tarot card reading and writes a poetic novel. Using the Tarot to dig into Swedish history sounds like even more of a trip! I look forward to reading THE STOCKHOLM OCTAVO!

Definitely on my list of To Be Read books. Because of the tarot aspect, I think it could be interesting. However, I'm worried it's going to be something far too similar to ANNO 1790, a 2011 Swedish television series.

I added The Stockholm Octavo to my to-buy list. I dipped into the first chapter on Amazon and loved it.

I am only halfway through The Stockholm Octavo and am so impressed that I let Karen Engelmann know. Wonderful book.

I am only halfway through The Stockholm Octavo and am so impressed that I let Karen Engelmann know. Wonderful book.

I am fascinated by the many artistic variations of the Tarot and how the cards change with each region and time in history. Thank you, Goodreads, for featuring this author and book

This is the next book I'll read! Great interview, love the subject

I am fascinated by the many artistic variations of the Tarot and how the cards change with each region and time in history. Thank you, Goodreads, for featuring this author and book. It is now on my holiday list!

In The Castle of Crossed Destinies, Italo Calvino sets out to do a Tarot card reading and writes a poetic novel. Using the Tarot to dig into Swedish history sounds like even more of a trip! I look forward to reading THE STOCKHOLM OCTAVO!