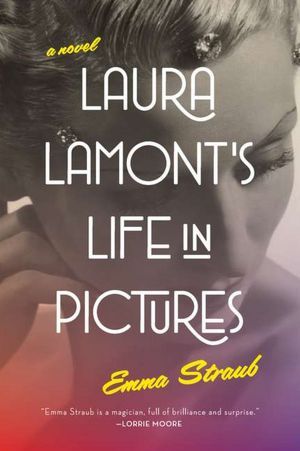 After covering relatable characters and ordinary relationships in her short story collection Other People We Married, Brooklyn writer Emma Straub sought exotic and unfamiliar material for her next project. Her debut novel, Laura Lamont's Life in Pictures, channels the glamour and lavish excess of Hollywood's golden age at the height of the studio system. Her heroine, callow Wisconsin teen Elsa Emerson, steps off the bus in Los Angeles in 1938 and is soon plucked by a powerful film exec to become alluring screen siren Laura Lamont. Straub follows the transformation and personal upheaval of this fictional movie star for several decades.

When not writing her next novel, the native New Yorker is a staff writer for Rookie, a bookseller at Brooklyn's BookCourt, and cofounder of the design firm M+E with her husband. Straub shares an inspirational scene from a classic film.

"A scene from Funny Face, with the incomparable Kay Thompson."
Goodreads: Are you a film buff? What are some of your favorite films and movie stars?

Emma Straub: Yes and no. I love the movies and always have, but I know some real film buffs, and they put me to shame. I do have some favorites—Hitchcock's Rebecca, Audrey Hepburn in Funny Face, Gene Tierney in Laura. Those are truly great movies.

GR: The infamous Hollywood studio system rebuilt the lives of its stars as needed. At first your heroine embraces the process of reinvention. Why do you think we so often yearn to be someone else?

ES: I think we all long to rid ourselves of our baggage at one point or another—when we start a new school, or end a relationship, or move to a new city. Of course, even in the studio system, with a new name and a new wardrobe, all that stuff comes right along with you. I think we all yearn to be someone else because it's impossible, and don't we all want that? It's like wanting to fly.

GR: Historical fiction set in Hollywood is a pretty large departure from your contemporary short story collection, Other People We Married. What prompted the change of pace?

ES: It was quite a departure, and that was intentional. I loved writing the stories in the collection, but I also felt like they were so close to me that I really was anxious to get some distance. 1930s Hollywood, that's some distance, no? The book ends in 1980, which is the year I was born. I liked that easy symmetry. Also, to my great delight, it turns out that research is wonderfully enjoyable if you find the subject fascinating. I did a lot of giggling and crying in various libraries. Belated apologies to my fellow patrons.

ES: I'm working on a new novel right now. It follows some characters from my story collection—Franny Gold and her family—as they vacation in Spain. It's still new, but I'm having fun so far.

Goodreads: "relatable"? That's terrible wording. . . . PLEASE use real words when you write (as I implore my students). . . As Montoya says, "I do not think that word means what you think it means."

You are wrong, relatable is a word

In other words, the highlights should indicate the impact of the achievement in a relatable context.
On-screen, a good soap requires relatable characters and believable story lines.
He says everyday simple things and makes them so relatable.

These are not my scentences - from dictionary.com; a form of relate is relatable.

The issue I have with "relatable" (ugh. Can hardly type it) is that it needs a preposition to be correct when it's used in the sense of "I can relate to that. . .". The other sense, as in "able to be related or retold," as in, "That joke is not relatable in mixed company," is fine. But to say, "That character is so, like, relatable," really means that there's a whole prepositional phrase that's left floating out in the ether, thus making it---in my opinion--a mushy construction. I'm sure the OED would've added all that, had the editors had time. :)

the highlights should indicate the impact of the achievement in a relatable context.
On-screen, a good soap requires relatable characters and believable story lines.
He says everyday simple things and makes them so relatable.

the highlights should indicate the impact of the achievement in a relatable context.

the highlights should indicate the impact of the achievement in a relatable context.
On-screen, a good soap requires relatable characters and believable story lines.
He says everyday simple things and makes them so relatable

the highlights should indicate the impact of the achievement in a relatable context.

This sounds like a remarkable book and story. I will put it on my "To read" list

relatable is a word

relatable is a word