Posted by Goodreads on September 29, 2016
35 likes · 8 comments
Zadie Smith's latest novel, NW, tackles the subjects that have long preoccupied her work: class, gender, and education. Though she now resides part-time in New York (where she teaches creative writing at New York University), the setting is her native London, where thirtysomethings and best friends Keisha Blake and Leah Hanwell are both apparently happily married and gainfully employed but chafe against the trappings of domesticity. In her debut novel in 2000, White Teeth, Smith introduced her trademark style, a syntax reflecting the rhythms of London's multicultural vernacular. She followed up with The Autograph Man and On Beauty as well as a collection of essays, Changing My Mind.

Interviewer Margaret Wappler spoke with Smith about the challenges she continues to face as a wife (of the poet and novelist Nick Laird) and a parent of a youngster—and her emotional relationship with Kierkegaard.

Goodreads: NW is your fourth novel. Does it get easier as you go along or harder? How did the process of writing this book compare to others?

Zadie Smith: So much harder! I never seem to get more confident—I always have this sense of making a fool of myself one way or another. It's never good enough for me, and I give myself a really hard time. But it must all be some kind of a choice: It seems to be the only way I can get work done is by basically telling myself it's dreadful every day for seven years. Some people are motivated by enthusiasm. I suppose it's the opposite with me; it's self-criticism that makes me go on.

GR: The way your characters experience time in NW is interesting. It often feels like things are happening in real time, the narrative carried from one minute to the next instead of compressed or summarized. Can you speak about time in novels and how it's rendered in NW?

ZS: Well, one theory of the novel is that any artist's style is determined by how they deal with time. There is such a thing as "narrative time," which is overwhelmingly artificial, in which things happen with the neatness of a sitcom or Hollywood rom-com. At the other end, there's the European avant-garde sensibility (particularly seen in European cinema) that time in art should be painfully slow: every moment experienced, no shortcuts. But in some ways that kind of time is as artificial to me as the kind of time you see in American movies. I think time is relative (obviously I'm not the only person to ever think this!) and that we experience the time of our lives at different rates, depending on what we're doing and feeling. I was especially interested in what I kept hearing my peers saying in a very casual way: "I feel like my life is speeding up!" And that they're childhood had, by contrast, felt so slow. I thought, How can I mimic that in narrative? Because that is a "true" sensation, and most novels sort of ignore it.

GR: Goodreads member Rachel Fewell asks, "Race and class always play a role in your novels. Do you think the political climate has influenced you in writing NW (Occupy Wall Street movement, the 99 percent, etc.)?"

ZS: For sure. I was watching the Occupy kids march past my window all fall. And we went down there and talked to people and saw what was going on. And I was reading a lot of history about other movements of the people, especially in medieval and civil war Britain. So it all mixed together in my mind and became a sort of excitement. Despite the difficulties, it was very exciting to write this book at this moment.

GR: Goodreads member Patricia asks, "You write about London with such intensity and a respectful love for the often gritty and hardened landscape. As an Afro-Caribbean Londoner (West), born and bred, I often relate to the London you write about; your stories and characters are a detailed living, breathing road map that explores all the things (the good and bad) that make London great but often a difficult place to grow up. How important is the personality of London to the plot, the individual stories, and the characters in NW?"

ZS: I think I probably start with people's voices, and they tend to be intensely local. And my experience of London is just always a fantastic correction to what passes for the "national conversation." I'm always aware, reading the British papers, that the national conversation isn't national at all—it's been written by people who live mainly in Notting Hill and Primrose Hill, and from their standpoint it probably does seem like England's going to hell in a handbasket. But on my streets it doesn't. I never found my part of London difficult, only fascinating. Or better to say, To me even the difficulties are fascinating. I feel privileged to have come from where I come from. I always have.

GR: In your new book the colloquialisms of the neighborhood not only inform the dialogue but the prose style of the book. What's the secret to capturing authentic vernacular?

ZS: The dull truth about that is that if you have "an ear for dialogue," you really don't have to do much to it. It's like being able to sing or dance—it's somewhat instinctive. Everything else about writing novels is a struggle for me—especially what people call plot!—but dialogue is the thing that has been given to me, and I'm very grateful for that.

GR: Goodreads member Celia asks, "In White Teeth you drew on philosophies of Zeno (Zeno's paradox specifically) and Jean-Paul Sartre. Would you say that you draw on philosophy for inspiration much in your fiction? And what role do philosophical ideas play in your writing?"

ZS: To me philosophy is writing. I curl up with a philosopher in the same way I would curl up with a novel. I don't recognize the distinction between the forms, really. I never was an academic philosopher, so I'm sure I read philosophy badly and with a great deal of ignorance, but I read it with enormous pleasure, and my favorites are meaningful to me as if they were characters in some enormous novel. Kierkegaard is a character to me (actually, many characters, because that's how he liked to write), and I read him thinking of him like an old friend. All my old friends have an effect on my novels—some of these friends are real, some of them are characters in novels or the voices of novelists or poets, and some of them are philosophers. For this book it was really Derrida and Barthes and Foucault and Kierkegaard. It's always them, really, but it really doesn't and shouldn't matter to readers. Mostly the connections are invisible, I should think. I really read them for enjoyment and for the inspiration.

GR: You've said in the past that you might not write forever and may instead work at a different job. Do you still feel that way?

ZS: I always feel that way. I'm not one of these people who needs to write to live. I'm very lazy, really, and I think I'd be more than satisfied just teaching and reading and being with friends and family.

GR: You're the mother of a young daughter. Has motherhood affected how you write or how you spend your time as a writer?

ZS: Of course. Everything is done in small pockets of time, and everything about time itself is transformed. Did I really used to get up at 11 and read a book a day? Now it takes me a month to finish a normal-size novel. For a while it's a heartbreak, but the compensation has been comically enormous.

ZS: I have child care from 9 to 3. But I swim or run for an hour in the mornings. If I don't exercise, I get very down. So workwise I get five hours. An hour or two of that is lost to e-mail and Google and assorted tedium. So it's a two- or three-hour day. I just type as fast as I can and try and leave half an hour for reading.

ZS: I really find this question impossible to answer. Books are my life, so I'd be typing till next Christmas. Best to limit it to this novel perhaps? In which case James Baldwin, W.E.B Du Bois, Sartre, Hilary Mantel, Muriel Spark, Charlotte Brontë, and most rappers you can think of.

ZS: The Orphan Master's Son by Adam Johnson, How to Make Love to a Negro Without Getting Tired by Dany Laferrière, and A People's History of London by Lindsey German and John Rees. 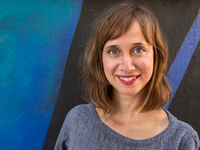 Interview by Margaret Wappler for Goodreads. Margaret has written about arts and culture for the Los Angeles Times, Rolling Stone, the Believer, Fader, NYLON, and other publications. Her fiction was recently anthologized in Joyland Retro, and she has been published in Another Chicago Magazine, Black Clock, Facsimile, and Public Fiction. She lives in Los Angeles.

Learn more about Margaret and follow what she's reading.

I loved White Teeth. I did not like (at all) The Authograph Man. I liked a lot On Beauty and I did not read the collection of essays (a genre - short stories - that i confess that i dislike)
I am looking forward to read NW

Started NW and really did not like the style. Input it down! I had loved White Teeth.

Ive read the Autograph Man and On Beauty. Loved them and am eager to try this new one. My family, Daughter, her partner and my three grandchildren, are typical of the populous living in NW and actually live there themselves.

is zadie from girlfriends

Lynne, Ive not heard of this/those forum(s). Where can I find it, please?

Quite a challenge, then! And one I'd never meet. It takes me 4yrs min to write a novel, and nothing's going to change that, as far as I can see -- even if I had a brilliant idea for a new one.
All I'm concerned with at the moment is getting the 4 books I have already written out to some readers.

But many thanks for the info.