Posted by Goodreads on September 5, 2011
25 likes · 15 comments
Juicy secrets abound in Madeleine Wickham's novels. Clandestine affairs and unhealthy obsessions often surface in her plots, and the author herself harbored a secret for years. After several successful novels, including The Gatecrasher and The Wedding Girl, Wickham started using a pseudonym. As Sophie Kinsella, she released Confessions of a Shopaholic and went on to become an international publishing sensation, with six novels in the Shopaholic series. The English writer kept her identity hidden for five years, but now that the truth is known, she is sharing her earlier novels with Kinsella fans. Written when she was just 24 years old, her debut 40 Love (originally titled The Tennis Party in the U.K.) is now available for North American readers. In this comedy of manners, nouveau riche couple Patrick and Caroline Chance host a weekend party at their country estate. Their social-climbing friends play mixed doubles while Patrick peddles a sham investment scheme. Wickham chatted with Goodreads about her darker nature and what recessions mean for Shopaholic fans. 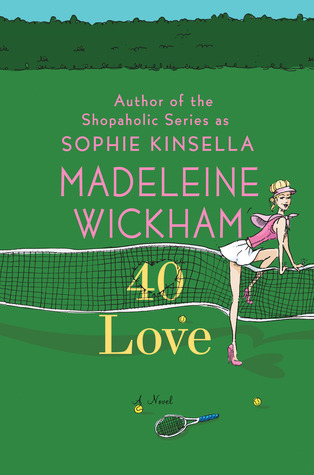 Goodreads: Are you a tennis player yourself? What do you love about the game?

Madeleine Wickham: I am certainly a tennis player! I have played all my life and love the anticipation of walking out onto a court, racket in hand. It's a game that is just as much about state of mind as physical skill—and that makes it especially interesting for a novelist. It's also a very elegant game, is generally played in the sunshine, and the clothes are great. What's not to like!

GR: The characters in 40 Love squabble over money and invariably yearn for more. Money matters are an emotionally charged subject in many of your books, whether you're writing as Wickham or Kinsella. What is it about the human relationship with wealth that intrigues you?

MW: Money is a driving force for all of society, whether you like it or not. I love to write about flawed characters, and it seems to me that the pursuit of money can bring out the very worst in people. Sometimes this can be comic, sometimes tragic, sometimes both. People confuse money with success in life, with status and with happiness. They go to all sorts of lengths to acquire it. I find it endlessly fascinating.

GR: The Tennis Party, now 40 Love, was originally published 15 years ago. Why rerelease it now? Did you revisit the material for this special edition?

MW: My publishers suggested rereleasing the book, and given the financial turmoil we find ourselves in, it seems especially relevant! I didn't rewrite the book—I don't believe in doing so. The book stands as a work of its time, and I think it would be a mistake to try and update it. Also, I am a very different writer now and would find it impossible to go back into the mind-set that I had then.

GR: The Tennis Party was your first novel. With so many best-selling novels now under your belt, what have you learned about your style and approach to a story? How have you changed as a writer?

MW: I am learning all the time, and I hope I have improved as a writer after all these years! The format of The Tennis Party is very simple—one weekend, one location, a fixed cast of characters—rather like a play. I deliberately kept it simple, as this was my first novel, and I didn't feel confident enough to tackle a broader backdrop. Since then, however, I have written books that are set all over the world, with all kinds of demanding concepts, from memory loss to a ghost! I love to challenge myself and try new things, and I hope that way I will always stay fresh.

GR: Goodreads member Jan writes in her review of 40 Love: "When Madeleine Wickham writes as Madeleine and not as Sophie Kinsella, her characters are a lot darker. There are some mean behaviours and interesting twists." Would you agree? Do you give yourself more freedom or pursue different themes when writing in your own name?

MW: I agree, there are darker themes and characters in my Madeleine Wickham books. Under the persona of Sophie Kinsella, I feel as though I am writing "sunnier" books. They are essentially comedies, so will never become too dark. As Madeleine Wickham, I can plumb the depths of human behavior a little more and expose the ugly ways that people sometimes act. This way I think you can achieve a high level of drama and suspense—you have no idea what a character will do next or what they are capable of.

GR: Goodreads Author Annette Laing asks, "How is the age of economic austerity (especially in the U.K.) affecting your thoughts about the future of the Shopaholic series?"

MW: Hi, Annette! Good point. I feel as though Becky Bloomwood could stand as a one-woman metaphor for the economy. She spent too much, lived in denial, allowed the debt to build, and then had to deal with the consequences. She has been through what we are all going through and managed to find a solution. Certainly, I was very aware of the austerity age while writing Mini Shopaholic, which is why Becky resorts to extreme measures such as bartering goods. I will be aware of it in future books, also, and I feel that, if anything, Becky can be an inspiration. If a shopaholic can deal with the global crisis, then we all can!

GR: Goodreads member Aristogama Inounu asks, "[Many of] your books are written in the first person perspective. What are the advantages?"

MW: Hi, Aristogama! Good question. I love writing in the first person. All my Sophie Kinsella books have been first person, and I find it a very intimate, confessional way to write. I think the reader can get very close to the narrator and almost "live" the book with them.

The disadvantage comes with plotting. It is far easier to build up suspense in third person, as you can zip between characters and reveal secrets that the protagonist has no idea about. I think first person writing can be more intense and personal, but third person possibly more fun, as you can really "play" with a plot.

MW: Every writer is different, and I am a real planner. I spend weeks sitting in coffee shops with a notebook, sketching out and planning a book before I begin writing. I want to be sure of where I'm going before I sit down and write "Chapter One."

When it comes to the actual writing, I always have loud music playing, which a lot of people find surprising! I find it gives me energy and blocks out the rest of the world. A dance track by the Scissor Sisters is always good to kick-start the morning.

Then it's just me and a cup of coffee and off I go. I try to write 1,000 words a day. Sometimes I do that by 11 a.m. Other times I'm still struggling at 3 p.m. Then it's time to give up for the day! If I get really stuck I go out for cocktails with my husband and talk through whatever plot point has gotten knotted. After a few mojitos we generally manage to solve it!

MW: I was recently reading a children's book by E. Nesbit (Five Children and It) to my son, and I realized how much she influenced me as a child. Her characters are so funny and human, and all their plans have such good intentions (which generally backfire). Jane Austen was also a huge influence, and David Lodge. Now I try to find influences from the world around me. I search out human foibles and try to make comedy from them. They endlessly fascinate me.

MW: I don't usually read much nonfiction, but I have just finished Rob Lowe's autobiography, Stories I Only Tell My Friends. I thought it was great—really well written and fascinating.

GR: What's next for you as a writer? Goodreads member Jessica Jones asks, "I'd like to know if there are going to be any more books in the Shopaholic series."

MW: Hi, Jessica! I have just finished my latest book, I've Got Your Number, which is coming out next year. Then I think I will write another stand-alone book before returning to the Shopaholic series. It is lovely to take a break from Becky and explore different avenues—having said that, I am looking forward to catching up with her again!

Thank you for answering my question :)

And for answering mine! Your books are so wonderfully warm and witty. They make such a pleasant change from the heavy and, frankly, dull reading that is my lot as a professional historian. :)
Annette

Thanks for answering my question! I am very much looking forward to I've Got Your Number. :)

I read this when it was originally published back in 1995 in the UK. I have always enjoyed Madeline Wickham's writing.

I have nearly finished The Wedding Girl and I have really enjoyed it. Whilst reading it I actually have pictures in my head of the characters and settings. Love all your books and Sophie Kinsella's.

Please give a list of fiction books you recommend or
have liked! I have enjoyed your past lists.

I really liked "Remember Me" Are you going to go back to that character at some point? The "Shopaholic" books were very entertaining. I'm not sure why the movie had to be transplanted to New York.

I am a huge fan! Actually just finishing *Mini Shopaholic* now! Love all of your work! ✿

I'm reading 40 Love right now... I'm not very far into the story yet, but I'm really enjoying it... I've had several LOL moments already! :) I'm looking forward to reading more of your books, and I really enjoyed this interview ;)

How did you come up with the idea of using the letters and documents in the Shopaholic books? I find it fascinating how they include an extra dimension that allows us to see Becky as the unreliable narrator she is. Do you spend a lot of writing time making them up?

The Shopaholic books are the funniest I've ever read. Becky is in such denial in the first two books. I think she's responsible for helping me pay off my credit cards!

Hello
My name is Ms Eivor Lundgren and I live in Uppsala Sweden. I have read some of your books and I love them all, mostly TheUndomestic Goddess in Swedish "En skopa kärlek". Are you going to write a new book how life and love will go on for Samatha and Nathaniel? ??Otherwise I will start writing a proceeding book in Swedish.Sincerely I hope you will be able to understand my English writing. Thank you for your answer in advance. Sincerely Eivor Lundgren, Lapplandsresan 44 S-75755 Uppsala Sweden