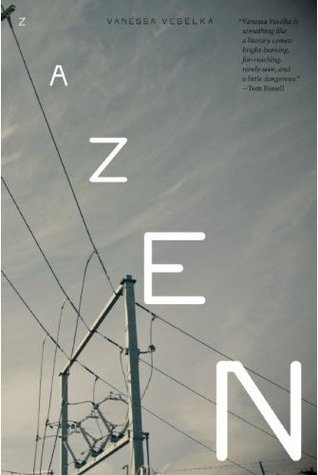 Vanessa Veselka's eclectic résumé ranges from paleontology to union organizing, and now she can add novelist to the list. Her bold debut is Zazen, a scary and yet humorous look at a dystopian America where bomb threats and terrorist attacks are part of daily life. Waitress Della begrudgingly serves up tofu scrambles at a vegan diner, collects maps, attends yoga, and considers leaving the city. Then she decides to make bomb threats of her own. But when real explosions decimate her fake targets, Della's experimental rebellion takes a darker turn. 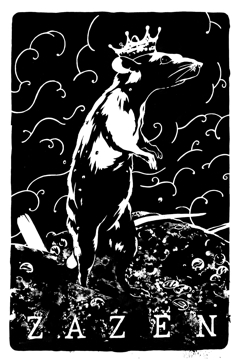 "The Rat Queen is a character in the novel, or at least a psychic intrusion. This rendition was drawn by Stefan Jecusco, to whom I dedicated the novel. Something in the eyes of the rat, a remote exhilaration, captured the tone."
Goodreads: Why did you choose the title "Zazen"? How does the word connect to your story?

Vanessa Veselka: Zazen is the Zen term for the practice of sitting meditation, but versions of it exist in all Buddhist practices. It extends beyond that, though, into the way we live. For me with Della, it meant, can you sit still on fire? Can you hold your place when everything is burning and you don't know where it's going or what will happen? I don't see it as a blissful sense of eternity but rather an uncomfortable discipline of the heart. It is related to Della's deepest desires to distance herself from the world she lives in.

GR: Who or what came first in your creation process: Della or her broken-down world?

VV: The first thing I wrote in Zazen was a conversation between Della and her brother, Credence, and the first line was "Do you think you could sit still on fire?" That line didn't make it in but almost the whole section stayed the same, and it's in the first chapter. But I didn't know then how much it would drive the narrative. I was freestyling, which is how I write, stream-of-consciousness dialogue until I hear a voice. The world then grew out of the way Della understood it. She wasn't created within it, but it in her, if you know what I mean. 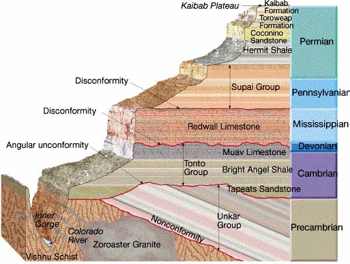 "Della often speaks in geological terms. Layers of rock are history. In this picture, which is the Grand Canyon, the water has cut straight down into the past."
GR: Describe your world-building process—bomb threats, terrorist attacks, vegans, counterculture. How did you choose certain elements, and what ideas for the world did you discard?

VV: Once I had Della's fear and frustration on the page everything tumbled in faster than I could manage it. I had too much world. I had to scale it back. I could have gone down any alley on any street and found a whole new story line. My rule for excising text was to avoid duplication. That was the ideal, but I'm sure some made it in.

GR: Do you have any favorite dystopian novels?

VV: I have not read any officially dubbed dystopian novels yet, though I should. I should probably start with The Road, since I like McCarthy. But Blood Meridian is just as dystopian to me. Heart of Darkness, Berlin Alexanderplatz, All Quiet on the Western Front—that's the thing about literature, somebody's world is always getting destroyed.

She's written a dystopian novel but has never read one before? This confuses me. Maybe I just didn't understand what she meant.

Why would someone need to have read a dystopian novel to be able to write one for themselves. All one really needs is to look at society and use their imagination.

Interesting! I've been looking to read more dystopian novels so I'll add Zazen to my to-read list. While I doubt it's going to be Orwellian stuff, I can see Zazen being an interesting read anyway; everyone writes in a different manner, and I'm interested in seeing how Veselka's style works with a dystopian story. I hope it's good!

I just finished reading 1984 this morning. It was such a sad book. I had to stop reading mid page a couple of times just to collect myself. I'd say it should be mandatory reading for all high school students but that'd go against the spirit of it. I'll keep an eye out for Zazen as I'm interested in meditation but the concept of self annihilation doesn't seem as noble to me as it once did.

Tried Zazen and gave up on it. If there was a point I missed it amongst all the hipster gibberish.

Robert Wilson Why would someone need to have read a dystopian novel to be able to write one for themselves. All one really needs is to look at society and use their imagination.

She's written a dystopian novel but has never read one before? This confuses me. Maybe I just didn't understand what she meant

Zazen is good. So is The Road by cormac mccarthy and Children of Men by PD James. Just in case you've missed them