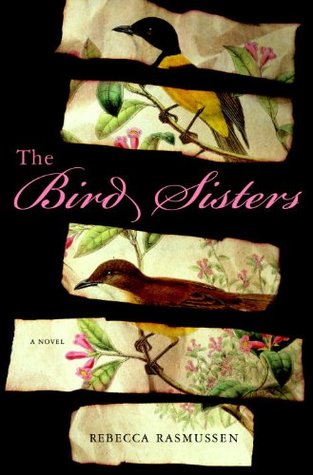 When her grandmother passed away, Rebecca Rasmussen received a remarkable gift—the journals her grandmother had kept for more than four decades. Knowing they held a treasure trove of story possibilities, Rasmussen spun her grandmother and great-aunt's lives into a debut novel, The Bird Sisters. In the book, two elderly spinsters named Milly and Twiss live together in an old house in rural Wisconsin where they are known for nursing injured birds back to health. The tale also alternates with scenes from the fateful summer of 1947, when certain events fractured their family and set the course of their life together.

Rasmussen shares photographs with Goodreads that inspired her storytelling. 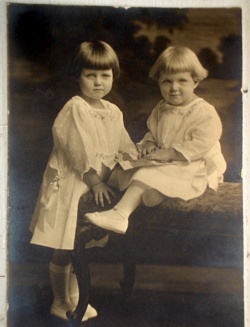 Rebecca Rasmussen: For several years after my grandmother passed away, I kept trying to figure out how to create a story that honored her, based on the journals she kept over a 40-year period. There was a lot of unhappiness in her journals, a lot of wishing her childhood had been different. Her parents passed away within a year of each other when she was a teenager, and she was constantly torn between making martyrs out of them and seeing them as real people capable of the grave mistakes each of them made. Once I allowed my characters to take their own breaths, I fell in love with them—Twiss for her adventurous spirit, and Milly for her family-bound one. The sisters in the novel are different from my grandmother and her sister in that they cling to each other when the going gets rough. If there is a reckoning in the novel, it's that while familial love can harm you, it can also save you.

GR: Milly and Twiss are heavily influenced by the unhappiness of their parents' marriage in the novel. It sounds like your grandmother was equally affected by her parents' "grave mistakes." Can you tell us a bit more about that?

RR: After I read my grandmother's journals and learned about her parents' story, I found a picture of them at a county fair when they were very young. In it, my great-grandfather and great-grandmother are standing under a cardboard moon, looking at each other with a kind of uncontained love that is rare for photographs of that time. I kept measuring their expressions against the story my grandmother had told me. I kept wondering: Where did that love go?

The older I get, the more I am tuned in to the sacrifices—large and small—that people make daily for the good of their husbands and wives, their children and grandchildren, and even the animals they love. I am drawn to the idea of sacrifice because it often goes against our instincts, and because it can be one of the most beautiful things in the world, and yet its consequences can be devastating to have to survive. 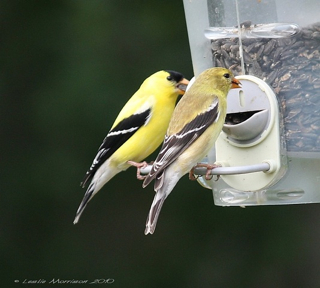 An injured goldfinch is brought to the sisters in the opening scene of the novel (photo by Leslie Morrison).
GR: The sisters share an affection for birds, and Twiss is an expert at healing bird injuries. Are you an avid bird watcher or bird lover?

RR: Once, when I was a girl, a robin flew into our sliding glass door while we were watching television. My mother opened the door and scooped up that sweet little bird, made a bed out of warm towels, got my brother and me into the car, and drove across town to the "Bird Lady's" house. I don't know if that robin lived or not, but for a long time I wondered about him and about the lady who made a life out of saving birds. Probably every town has a "Bird Lady," and, sadly, in every town birds fly into windows and windshields. Sometimes people do something about it. Sometimes they don't. I think what you do when you encounter an injured bird (or animal) says a lot about who you are. I am a person who gathers up warm towels like my mother. In the mornings I like to watch the little finches in our oak tree. I marvel at how clever they can be. How quick-footed. How zippy. To me, the poet Mary Oliver says it best about a little injured gull she and her partner tried to rescue. "Bird was like that...Startling. Elegant. Alive."

thank you so much to Goodreads for having me here :)

I love this idea of sacrifice being something that can save a life and something that can irrevocably weigh it down. How many people do I have in my life who have stumbled because their idea of who they are required them to give away too much? And how many do I know were saved because someone gave up so much on their account? A big idea for such a smart, beautiful book. And I love zippy little finches too.

What a rich way to give honor to your grandmother. What would we do without family stories. Sometimes I wonder if that is this is not the roots of storytelling. Can't wait to read your book. I've made a promise for the next six months to buy all my books from brick and mortar stores, so I'll be at my local bookstore April 12th.

Thank you so much Ann and Kate for your lovely comments. My grandmother has been a true influence and I am so glad that I believe she would be proud of this book...it took a long time to figure out how to accomplish that, but I love and miss her everyday. XOX

Rebecca wrote: "Thank you so much Ann and Kate for your lovely comments. My grandmother has been a true influence and I am so glad that I believe she would be proud of this book...it took a long time to figure out..."

I still miss my grandmother too, and she's been gone for over 23 years. I can hardly wait to read your book. Best wishes to you.

Your book sounds like my cup of tea. I wondered if you would answer a question for me. If I encounter a lot of strong language in a book, I can't finish it. It is very frustrating when I'm really enjoying the story, only to have to stop because of language I don't like to read. I guess I'm trying to figure out if I should start it or not.

I am not a fan of strong language usually either. I think it's safe to say that The Bird Sisters doesn't have any strong language that would upset or offend, especially since it is a bit old fashioned. Thank you so much for your thoughtful comment, Michele. :)

What a breath of fresh air. I was a little worried I may offend you even asking about it. I am really anxious to read your book now! I wish you the best of luck with its release.

Oh don't you worry about offending me. I think that is a completely valid concern and it's certainly difficult to know what language will ensue in a book. I understand :) Thank you so much for your well wishes. I hope you are having a happy night!

Rebecca,where in Wisconsin does your story take place?

In Spring Green, Suzanne. About 30 miles west of Madison :)

That is a particularly lovely part of Wisconsin. I am looking forward to reading your book!

Thank you so much Suzanne! I LOVE it there :)

Your book sounds wonderful! I'm adding it to my to-read list now and I'm really looking forward to it! I love the way you chose to honor your grandmother... what a beautiful idea. :)

Thank you so much, Amee. I hope you enjoy the book :)

I have five grandchildren and your story makes me wonder if they will ever read the journals I will leave behind. What you have done is really a lovely tribute to a connection with your past. Thank you for sharing this. I too will go to my local brick and mortar bookstore for a copy. Thank you Rebecca.

Rebecca,
Why did you choose Spring Green as the location for your story?

I absolutely love it there -- my father has a farm there and I played there as a girl! XOX

A wonderful tribute to your grandmother and I love the evocation of the past...

Thank you all so much for your lovely comments. It boosts my spirits so much! :)

Hi, Rebecca. I saw you speak at AWP in February on the new authors panel--it's exciting to see your book making its debut! Looking forward to reading it...

Thank you so much Kathy! XOXOX

I have to read the book now,thank you for your Wonderful Tribute to your Grandmother so we may have another good book to read.

Thank you so much Debbie! XOX

Thank you so much Emily! XOX

Great interview! I cannot wait to read the book, my copy is on its way to me :).

I won a copy of The Bird Sisters through a Goodreads giveaway. I was riveted by the description of the book and now knowing the story behind the story, I am looking forward to it even more. My copy should be here soon, and you can be sure I'll start it as soon as it does! Thank you for the great interview, Rebecca :)

I am so glad you won a copy Myra Beth :) Thank you very much for your kind words about the story behind the story. I hope you enjoy the book! XOXo Keep in touch.

Hi, Rebecca,
I want to read your book as soon as my dear, sweet husband manages to re-install the Kindle on my computer. He forgot the password before revealing it to me. (He does this all the time.) Your book is especially interesting for me as I had two maternal grandmothers (my real one, and her sister, my adopted one). They were living together, and - evacuated from Munich because of increasing air raids - my mother and I lived with them (while my father was drafted). If you care to read my early-childhood memoir "Time Travel into Babyhood", once it is published, you'll see that my two grandmothers played a big role in my life, just as your grandmother and her sister obviously played an important role in yours.

That is a particularly lovely part of Wisconsin. I am looking forward to reading your book!

I am not a fan of strong language usually either. I think it's safe to say that The Bird Sisters doesn't have any strong language that would upset or offend, especially since it is a bit old fashioned. Thank you so much for your thoughtful comment, Michele. :)

Oh don't you worry about offending me. I think that is a completely valid concern and it's certainly difficult to know what language will ensue in a book. I understand :) Thank you so much for your well wishes. I hope you are having a happy night! 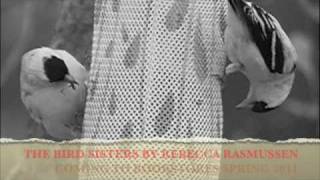