During the Blitz of World War II, civilians retreated to London tube stations where they slept on bunk beds and patiently waited for the German bombing to subside. In the East End, the Bethnal Green station housed an underground hospital, meeting hall, even a makeshift library. But in March 1943, a stampede killed 173 people as they responded to a false air raid alarm. Debut author Jessica Francis Kane fleshed out the tragedy in The Report, an exploration of how Londoners demanded answers from magistrate Laurence Dunne and hoped to wring meaning from one of the war's great civilian disasters. Kane shares with Goodreads some historic images she uncovered during her research. 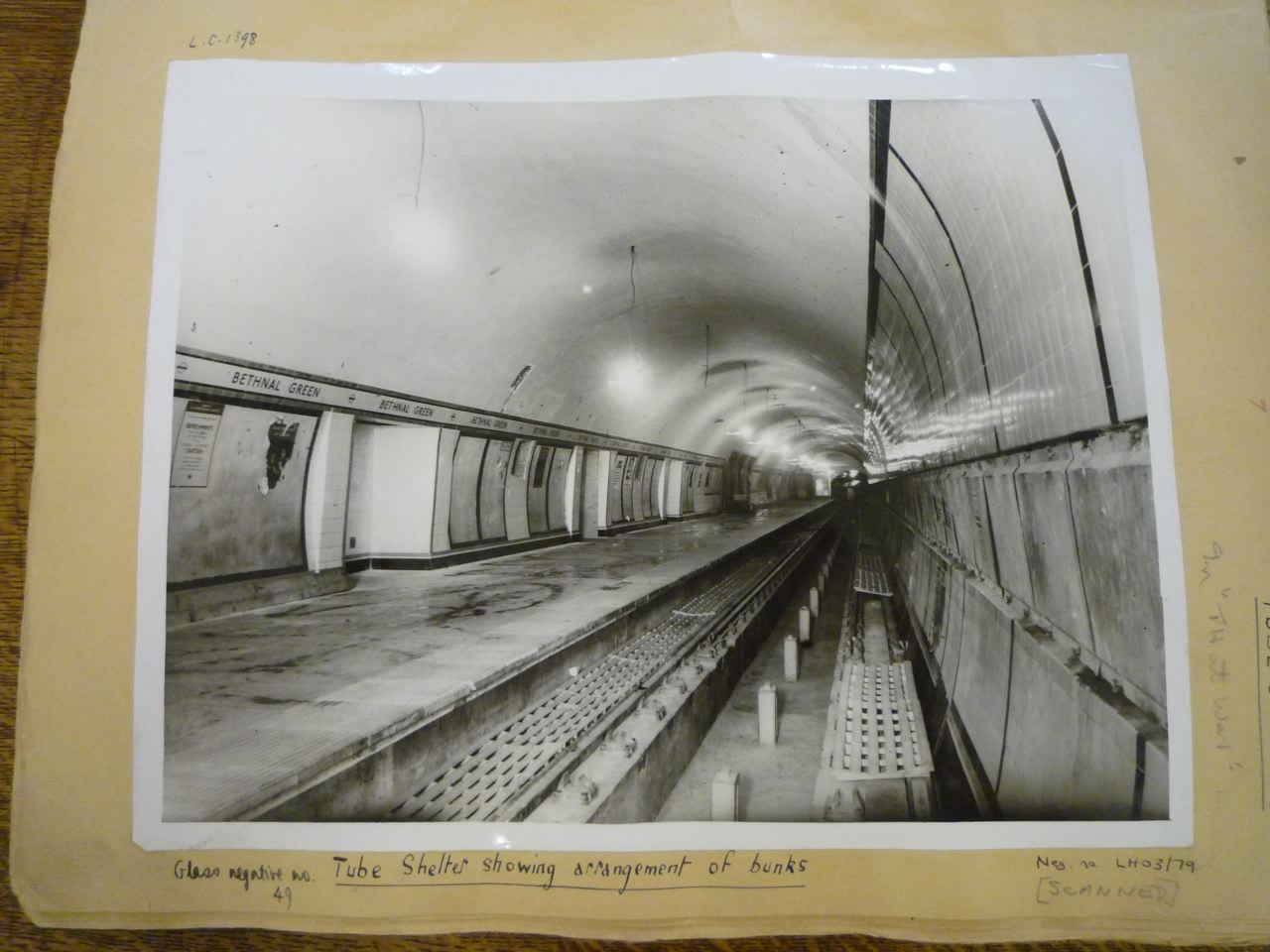 The Bethnal Green tube shelter showing an arrangement of bunks.
Goodreads: As a short story writer, how did you find the transition into novel writing? Did you have a long-standing goal to write a novel?

Jessica Francis Kane: I was a short story writer who wanted for a long time to write a novel. Friends would say, "Novels are easier! There's so much more room!" But all that room was exactly what I was afraid of. I understood the arc of a short story, and writing something over ten times as many pages just didn't make any sense to me. It probably didn't help that during those years an editor told me that my shortest story to date was, of all my published stories, the one that sounded the most like the opening of a novel. I spent a long time trying to pry that four-pager open. Eventually I gave up and went to the MacDowell Colony with a proposal for a novella (I thought I'd sneak up on the novel!). During that two-week fellowship, I saw my way toward the novel that became The Report. It was one of the most exciting times in my life, and I will always be grateful to MacDowell for somehow making it happen. 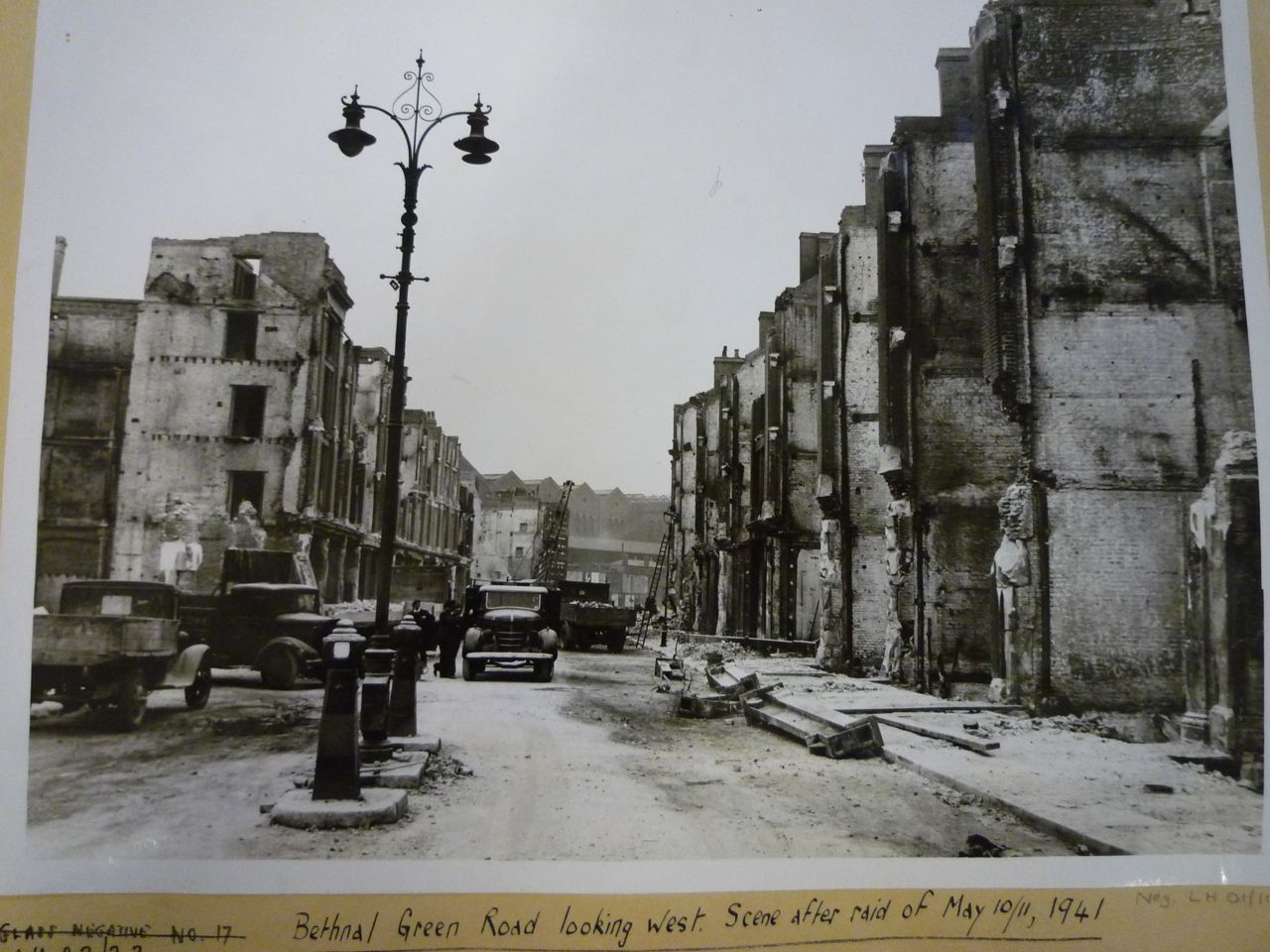 Bethnal Green Road looking west. The scene after the raid of May 10-11, 1941.
GR: When did you discover your topic, the 1943 Bethnal Green tragedy? How did the novel take shape from your research?

JFK: I first came across the story ten years ago, when I attended an event at the British Library for a new series of books published by the London Stationery Office. The series is comprised of official government reports not previously available in popular form, and the one the series editor held up in his hand—and spoke passionately about for a few minutes—was The Tragedy at Bethnal Green. The magistrate who'd investigated, the editor said, had done an unusually good job and then had delivered an elegant report. I bought a copy and later visited Bethnal Green to see the plaque that commemorates the accident. I took a few notes and thought I might turn them into a short story someday.

That was the fall of 2000. After 9/11, when calls began in the press for an independent investigation into that tragedy, I remembered the Bethnal Green report. It seemed to me there were parallels: A community had been shocked and needed an official investigation to tell it what had happened. Although the scale was vastly different, in both instances a great deal of hope—for explanation, reform, redemption—was placed in the inquiry and report-writing process. I began to wonder what good could come of it. The novel really took shape from these twin inspirations: my research into the Bethnal Green tragedy and watching [how] the modern-day inquiry into 9/11 played out in the press.

GR: Does The Report include both historic and fictional characters? How did you weigh fact and fiction?

JFK: The tricky balance of fact and fiction is one of the reasons I wrote The Report, and it pleases me to have the juxtaposition of those two ideas right there on the cover—The Report: A Novel. That was the whole point, really. We live in a report-saturated age, the news so often filled with the findings of the latest commission assembled to examine every tragedy, accident, or misdeed. But what is the role of a public report exactly? It attempts to be the truth, but is not always complete. It presents a story, but not always the one most people believe. I wanted to write a story about a report writer, here the magistrate Laurence Dunne (who is, incidentally, the only actual historical character in my book), struggling with these questions and the repercussions of answering them a certain way.

I thoroughly enjoyed this interview, it was informative, interesting and, for me, very evocative. Although I did not live at the time of the blitz, I did run the full length of Bethnal Green Road nearly every night of the week when I was courting Linda, who became my wife. I lived at Ealing so had to dash to catch the last Central Line train back west! Luckily I never missed it although on occasion there was a last desperate sprint to make it.

As for the station itself, our first date began in the passage of Bethnal Green tube station. When I asked Linda out, from the confines of the Colonial Office staff restaurant, she suggested that Bethnal Green tube station was where I met her. As a north country boy, working in London as an 18-year-old, I had never heard of Bethnal Green but did not dare to ask where it was in case Linda decided that I was not suitable for a date - and I desperately wanted that date.

I went back to my office and asked the people there where Bethnal Green was and their response was that I ought not to go there as it was in the East End and was the heart of what was then Kray country. I explained that I just had to go there so persisted in my enquiries as to how to get there. (As a matter of interest, Linda and I later married at the same church as the last of the Krays was buried.)

I duly went and as I walked up Whitehall, from my office in H M Treasury on that June evening in 1965, I passed a lady colleague who was waiting for a bus outside Horseguards Parade. She said the usual "Have a good weekend" and I said that I was excited as I was going to meet a young lady at Bethnal Green. I well remember Margaret Hardy, as she was called, rolling her eyes and saying, "Best of luck"!!

It certainly was best of luck for Linda and I were together for 40 years until her death so Bethnal Green has a very precious place in my heart.

I imagine that 'The Report' is a darned good read and I am glad that Jessica Francis Kane made it into a full-length novel rather than the novella that she at one time thought it would be. I will certainly be looking out for a copy.

Researching the novel and discovering the official pamphlet 'The Tragedy at Bethnal Green' and the historic photographs that have been revealed must have been quite exhilarating.

As I said at the beginning of this epistle (and I apologise for its length), I thoroughly enjoyed the interview and the memories it brought back for me.

I am glad that you found the comment interesting, thanks for saying so; it is much appreciated.

I notice that some of your favourite authors are mine also; Alexandre Dumas (I love the Count of Monte Cristo), Mark Twain, F Scott Fitzgerald and Beryl Markham (her autobiography and Mary Lovell's biography are super).

I also notice you edit the newsletter and a great job you do if I may say so.

Perhaps we could be friends if you care to.

Thanks for this interview...the topic sounds very interesting to me and I appreciated Gerry's story on his experience of Bethnal Green....I'll be looking for the book too.

Great interview! I hadn't heard of this book nor tragedy, but I'm eager to read this one. Thanks for spotlighting!

Thanks for this interview...the topic sounds very interesting to me and I appreciated Gerry's story on his experience of Bethnal Green....I'll be looking for the book too.

the topic sounds very interesting to me and I appreciated Gerry's story on his experience of Bethnal Green....I'll be looking for the book too.

.the topic sounds very interesting to me and I appreciated Gerry's story on his experience of Bethnal Green....I'll be looking for the book too.