"In Bed" with Anthony Bourdain

Celebrity chef Anthony Bourdain brings a sex, drugs, and rock and roll attitude to cuisine. The former executive chef of Brasserie Les Halles and host of the Travel Channel television show No Reservations eats adventurously (the beating heart of a cobra in Vietnam) and bashes his fellow chefs mercilessly (Rachael Ray is a regular victim). As a writer, Bourdain's flavors are equally bold. His first book, Kitchen Confidential, unveiled the ego and chaos of professional kitchens, and his newest, Medium Raw, is a culinary quest to understand why people bother to cook well at all. Sink your teeth into Bourdain's five favorite books that celebrate food.

Between Meals: An Appetite for Paris by A.J. Liebling

"This account of the great man's culinary adventures in the Paris of golden times remains, to my mind, the benchmark for great food writing. Appreciative of the good stuff, devoid of snobbery, and always conscious of the context in which a good meal is enjoyed—an experience inseparable from the times, the company, and other pleasures of the flesh."

"A collection of writings on food and restaurants by the original 'bad boy' of the hospitality business, whose Hotel Splendide peeled the roof off the backstairs industry in charming and unforgettable fashion—decades before Kitchen Confidential. Unlike Leibling, Bemelmans was a snob—one of legendary, titanic proportions—the kind who could only have emerged from the floor of a fancy hotel (the kind Bemelmans worked at for many years). The Madeline books might be his most famous creations, but his writings on food and the industry are among the best ever."

The Belly of Paris by Émile Zola

The Kitchen Book by Nicholas Freeling

"Nicolas Freeling, best known for his mysteries, wrote [this] criminally underappreciated book in which he describes his previous career as cook and chef in France and England. It was a major inspiration for me."

"More recently, Bill Buford's Heat is wonderful for the way you can watch its literary-lion author (a New Yorker editor and founder of Granta) first dip his toes into the professional kitchen—and finally become consumed by it. Buford started out writing an article about Mario Batali—and ended up going over fully to the dark side. Reading his accounts of sausage making in Italy and sautéing on a busy station in New York, you understand why."

I didn't realize he had a new book out, and he's one of my favorites. Thanks for the book recommendations!

excited about the new book as well! i would have my bedroom plastered with anthony posters if that wouldn't creep out my husband too much.

I'll put these on my request list at the library, but I also have to recommend Jacques Pepin's The Apprentice: My Life in the Kitchen. Not only a terrific perspective of growing up in the restaurant world, but about having to reinvent oneself when life hits you hard.

Also, the Freeling book is titled: The Kitchen: a delicious account of the author's years as a grand hotel cook.

I also like: "HERE'S TO YOUR HEALTH! Cooking With Red Wne" By C. Branand

I just started "Heat." It's very fast-paced and enjoyable.

I prefer to listen him than read Bourdain. i listened to Kitchen Confidential and found it fabulous. I read his second book and found it nearly impossible to read. He writes like he talks. May check out the audio.

Michele wrote: "I'll put these on my request list at the library, but I also have to recommend Jacques Pepin's The Apprentice: My Life in the Kitchen. Not only a terrific perspective of growing up in the restaur..."

Jacques Pepin book is on my list of a great book. I recommend it highly. I lived in NY for many years and went to many of the places he mentioned. I don't think this book got the credit it deserved.

For me, the book was about cooking, but also about a man reinventing himself, and more than once! It's a great lesson for us all when faced with change.

I have to wonder...why AJ Leibling and not M.F.K. Fisher's "The Art of Eating" ?? She's the one credited with starting the Culinary arts here in the USA, after WWII. I have this on my nightstand, to grab when the urge hits. W.H.Auden wrote that he couldn't think of anyone in the States that wrote better prose. Thru an artist's eye, a marriage of wonderful words, love of food, and great relationships. Her love of the land and local culture and peoples was the driving force behind her talents; talents all geared to share the 'love of eating' with her readers, thru her insights, voice and pen. She was the inspiration behind Julia Child, Alice Waters and countless others. "There is almost a wicked thrill in following her uninhibited track through the glories of the good life"-James Beard

thank you for the recommendation, I will put it on my list after I read Bourdain's book.

you are welcome! get the 50th anniv.edition which is a compilation of her 5 great works.
(MFK = mary francis kennedy)

I got turned on to her after reading a Dec1999-Gourmet article by Ruth Reichl, 'a sensual hunger' which is terrific!

My job requires me to read alot--mainly "noteworthy" fiction. I got tired and just grabbed Anthony for reasons I can't explain. I haven't had such a great laugh in ages. I was hooked on page 2,and he soon de-livered my favourit line ever. I mean to say, well what could be a better put down than "somewhat slightly more important than a mouse turd."? I would like to know if, say, I could get the worst person in the world (say Bin Laden) to TEXAS, and then I'd kill him by purposely hitting him with my VW,--I'd be a hero, but would have to face the death penalty, could I get an Anthony Bourdain last meal?? with an ORTLAN starter???

BRAVO!, Choptoad...that was hilarious! (Thought you
were gonna say:..."then I'd kill him by making him eat
mouse turd.")

THANK YOU--and LOL back at you. That said, I imagine mouse turd is a favourite staple on the Bin Laden menu and wouldn't work as a murder weapon. I haven't read "Kitchen Confidential"--have you, and if so, is it as good??? Well, that's a silly question--I'm sure it is.

Choptoad- I've read one book by Bourdain and it wasn't even a cook book. I've forgotten the name of it but it was about a coke-snorting chef in N.Y. who gets involved with the Mafia. It's a little over-dramatic, but has lots of coloful language. I think it was his first book. It was entertaining.

Will I read KC? Probably, since I'm also an author and one of my books is about cooking.

Kitchen Confidential is his classic work.

Yes, it is, but he actually wrote a novel before that- I'll look-up the title.

Jenny: The novel I am referring to is: "Bone in the Throat" By Anthony Bourdain. It is available from Amazon.com/books.

Oh, perfect! I'm always up for recommendations and I've been interested in reading more about cooking as of late.:)

Joanie:
"Bone in the Throat" isn't really about cooking. It is Bourdain's (meager) attempt to write a novel about the mafia which includes some gruesome kitchen experiences (like people being stabbed with steak knives). If you are an ardent fan of Bourdain you might enjoy it. As far as remarkable writing is concerned- this book is a D+.

Well, this is about Kitchen which is good and nice also Vacuum Sealer Reviews 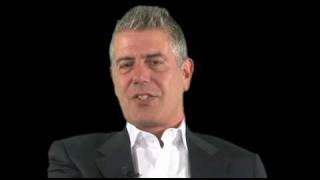