Posted by Goodreads on June 6, 2010
9 likes · 6 comments
[image error] Literary heroines such as Jo March, Celie, and Francie Nolan navigate the crossover from child to woman with pluck and poignancy, making Little Women, The Color Purple, and A Tree Grows in Brooklyn timeless classics. When Goodreads Author Hilary Thayer Hamann set out to understand what shapes a modern American heroine, she created the stunning debut novel Anthropology of an American Girl. A poetic rendition of the transition from innocence to maturity amid the political landscape of the '70s and '80s, the book was a self-published sensation before being released by Spiegel & Grau. Hamann shared a snapshot of Georgica Beach, where the novel's opening scene takes place. 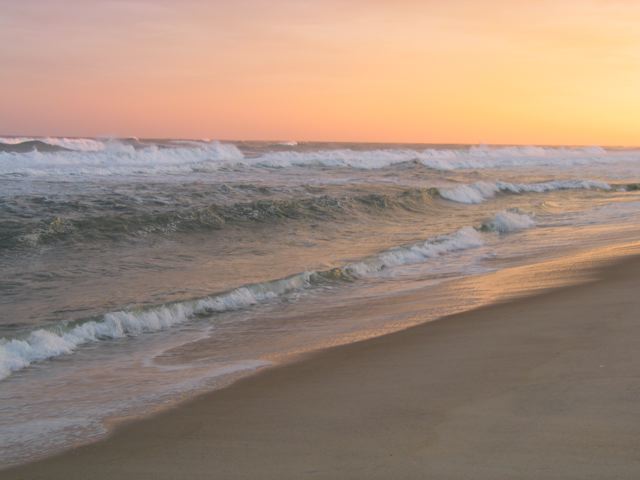 Georgica Beach, in East Hampton facing west. This is where the opening scene takes place with Kate and Evie.
Goodreads: For semi-autobiographical novels, readers always want to know what's true and what's false. Were there certain indelible memories from your younger years that you wanted to capture in the story? What moved you to write the book?

Hilary Thayer Hamann: The question of truth is a tough one to answer, which is probably the case for most authors of fiction. Some incidents that occur in the novel are based on actual events from my life, others happened to people I know, and many are products of my imagination. Of course, there is an overarching "truth" to the ideas that went into the development of the novel, in that they are mine. Even the most probing questions and self-destructive behaviors are not unfamiliar to me. This is particularly true of Eveline, whose perspective and point of view are inextricably tied to my own.

While studying anthropology in graduate school, I thought about the forces in American society that shape individuals and their actions. Why do some people shut down, turn cold, get greedy, etc., while others stay open, keep conscious, live modestly, etc.? How are our privileges and freedoms applied/misapplied?

I decided to seek the genesis of a "finished" person. Being that self-inquiry was part of the goal, I went back to a "girl." And I went slow, taking time to avoid stereotype. What I discovered in her—bravery, honesty, and genuine faith—changed the nature of the project. There was so much I had to offer, and so much I had to relearn, that an exchange occurred. I gave her some wisdom, she gave me some courage. So when you read the book, there are these layers. Of the many things I wanted to capture, I think the most important was the purity of mind that is the hallmark of those early years. Regrettably, this often gets lost as we age and begin to reject possibility and forsake inner potential. Every girl (and every woman) has the capacity to be a heroine—the question is, how to identify yourself as one before you are identified as something less than that by outside forces?

Also, I wanted to describe what it felt like to be in love, to lose that love, but to remain devoted.

GR: Given your background in theater and film, it is not surprising to find visualization throughout your writing, including vivid imagery of even tastes and sounds. What influences have shaped your writing style?

HTH: I was fortunate to have spent most of my childhood and adolescence immersed in theater, and if my writing style wasn't affected by that time, my sense of artistry definitely was. In the theater you're a member of a community before you're an individual. Anything goes: It's highly likely miracles will be expected of you. Your stimulating influences are constant and diverse. Everything is eligible for imitation, mockery, compassion. It led me to believe that anything is possible, and it gave me the confidence to just make art.

Film is not so democratic. It's a more hierarchical (and expensive) form, and as such it can be prohibitive to spontaneity and creativity. However, my time spent studying film has had a profound effect on my writing. The problems of relating a character's (and the director's) thoughts, intentions, and experiences through gesture are managed beautifully in film. I watch about five classic movies per week.

GR: What did you want to capture about American ideology and culture in the 1970s-'80s?

HTH: Mostly this: What happened to the 1960s? During my childhood in the '60s, the world was in turmoil, but there was a call to action and a humane response. It might have taken a while, but when it came, it came like a flood. It was an unleashing of culture, art, and politics that helped eradicate a century of social and civic inequity.

But in the 1970s, the idealism that had helped to create change just a few years before began to dam up. Conservative thinking was on the rise. Sure, there were pockets of conscious concern, but also the paranoid feeling that if you dared to be critical of oppressive entities, you would not advance. We found ourselves grappling with this on a daily basis in high school. Kids became increasingly shallow, judgmental, uninformed; there were cruel cliques that managed to thrive through the tacit approval of adults they'd pleased or flattered. Then, suddenly, on the world stage there was Reagan, with his sweeping deregulations of entire industries: banking, airlines, trucking, etc. Now look where we've landed. I'm no expert, but the connections between that time and this are obvious. It's like we took the wrong fork in the road. Rather than regroup and move toward sustainability, we swallowed the lies we were fed and kept striving for upward mobility despite its costs.

In Anthropology, I put Eveline in the midst of both worlds—the liberal and the conservative. I wanted to see how far she would go to be comfortable, unaccountable, invisible. I wanted to have her face the compromise of her own ideals and have the reader experience that crisis in the most personal way possible.

GR: Your protagonist, Evie Auerbach, has earned comparisons to Holden Caulfield, but the book is a distinctly female coming-of-age story. Do you have any favorite coming-of-age novels for heroines?

HTH: I like to think of the phrase "coming-of-age" as coming-into-consciousness, in which case every novel about a heroine who undergoes a transformation from uninformed to informed is a coming-of-age. The question becomes how to describe such transformations without making them too simple, linear, or trite. For that reason, I love Toni Morrison's Beloved, Carson McCullers's The Heart Is a Lonely Hunter, and Gustave Flaubert's Madame Bovary. Atlas Shrugged and The Fountainhead are neat because Ayn Rand's female protagonists move from worldly to soulful knowledge rather than the other way around. The Austen novels are wonderful, as are those of the Brontës. One of my favorite coming-of-age heroines is Juliet Capulet. She becomes a woman through defiance (the break with her family) and love (her union with Romeo), but she becomes a heroine by choosing to die for honor. She gave her word—her love was real. I love that she is the last to die. When she discovers Romeo dead, she has all the information. He is gone, her parents are outside the crypt. She can choose to escape and go on and be forgiven, or she can die alongside him, remaining true not to him necessarily but to her convictions, her character, her pledge. For her there is no choice; it makes me weep every time.

I can't wait to read this book. Very informative and honest interview.
Thank you.

I'm glad to see you got this book published. I read it when you first put it out and found it very moving.

If her book is as interesting as her interview thoughts, it'll be a good read.

Just started the book (to p. 88) and I'm enthralled. Evie's comments about high school are priceless distillations of what I observed in thirty years of teaching high school. The book I read just before this is Freedom by Jonathan Franzen, and he just doesn't get women or girls. What a refreshing ocean breeze this book is.

Thanks Joan, and everyone.