Posted by Goodreads on May 2, 2010
134 likes · 21 comments
Chuck Palahniuk, the author of Fight Club, Choke, and Pygmy, slays topics like anarchy, terrorism, and serial killing with dissolute abandon. His new book, Tell-All, leaves sociopathic characters behind for even scarier prey—the celebrities of Hollywood. Delving into cutthroat star making and the life of infamously mendacious Lillian Hellman, the book also offers a challenge to die-hard Palahniuk readers: Are you man enough to read a book with a sparkly cover? The controversial writer says he hopes this book won't get him sued and explains why he's currently reading Judy Blume. 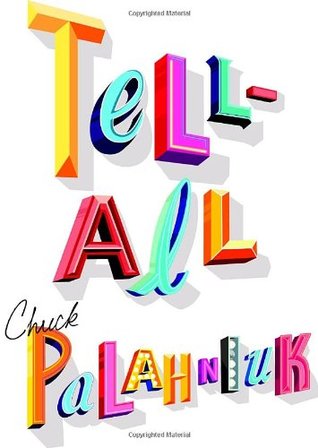 Goodreads: Your books are notorious for challenging notions of decency, which delights your fans and angers your critics. What in Tell-All will surprise your devoted readers and/or incense your detractors?

Chuck Palahniuk: Have you ever noticed that people who want to love a book before reading it will usually love it. Conversely, people who expect to hate a book will—voilà!—hate it. To circumvent this tendency I've arranged to have the actual paper pages of the book impregnated with mild amounts of cocaine, LSD, and Zoloft. Really, something for everyone. Plus, I wrote in oodles of sex. Dinner is served!

GR: Hollywood players can be wicked, but at first glance they seem tame next to the sociopaths who often populate your writing. What drew you to glamorous Tinseltown, and what real-life divas inspired your movie star character, Katherine Kenton?

CP: What? Do I look like someone who wants desperately to be sued? No, no, no way am I going down THAT road. Everything in Tell-All is based on tawdry truth, but I wouldn't dream of spoiling everyone's fun by telling what's what and who's who. This is Valley of the Dolls for a new generation. By now I know enough movie people and have listened to enough of their secrets to become truly dangerous in the world.

GR: Mary McCarthy famously said of Lillian Hellman, "Every word she writes is a lie, including 'and' and 'the.'" In writing Tell-All, what did you learn to be true about Hellman, and what should readers know about her going in?

CP: Let's just say that everyone in publishing has an unflattering anecdote about Ms. Hellman; she did cut a wide swath in the Enemy Department. The larger issue was: Which scathing remembrances to leave OUT?

GR: Speaking of Hollywood, so many of your books have been optioned for film adaptations. Are any projects close to production? Do you have any movie news to share?

CP: See how you are!! That's all you want: celebrity tidbits! In broad strokes, I have eight books in preproduction as films—yes, including Snuff—and one book is close to shooting. Maybe two are. The larger issue is your absolute obsession with film stars and movies. You need to seek some professional help.

GR: Goodreads member Lex Larson wrote in his review of Haunted, "All the blood-and-guts and bodily fluids in the world don't really gross me out. What really sickens me is people. And that's what Palahniuk does best: He writes about the dark sides of people and how precious little it takes to make those sides surface." You've stated that you don't find it necessary to "like" your characters. Are there any characters whom you do have affection for?

CP: I adore Denny from my book Choke, primarily because he's based on a long-dead friend. And, if possible, I'd eat lunch thrice weekly with Hazie from Tell-All because she's honest about being dishonest. Plus, she knows where all the bodies are buried. And most of those people she killed herself.

GR: You've spoken about how past books, including Lullaby and Choke, were instrumental in helping you cope with events in your personal life. Does every book have an element of therapy? Or do you have varying degrees of emotional distance from different books?

CP: Any author who claims emotional distance from his or her work is lying or extremely un-self aware. If an idea is going to claim your attention and energies for the months or years it takes to write a book, that idea must be resonating with something deeply personal and unresolved in your life. Did I say "months or years"? In my case, the writing process consumes days or weeks...or hours, largely because my psyche is about one millimeter deep.

GR: Goodreads member Sarah-Louise says, "I would like to ask [Palahniuk] what his most memorable/freakiest dream was and if he ever bases his writing on his dreams?"

CP: Who would want to read a book about me and Lou Diamond Phillips swimming through an ocean of lime Jell-O? Hello?

GR: Goodreads member Peter asks, "Chuck, I recognize that each book has its own unique structure to it, but Pygmy and Rant really took off in their own direction. Was there something behind that departure? A challenge? To see who would come with you? And where do you see yourself going, stylistically, for future books?"

CP: By using a nonfiction structure you can always tell a more outlandish story. Look at Citizen Kane and how the "realistic" newsreel setup lends gravity to a somewhat melodramatic plot. The same goes for Fargo, with its opening single-card statement: "The following is based on true events..." Anytime I recognize a nonfiction form I yearn to use that form to buttress a big lie. In a similar way, on the 2010 tour I'll be reading a story called "Knock-Knock," which uses comedy clichés to depict a tragedy. It's that built-in paradox: tragedy told as comedy...fiction told as nonfiction...that gives a story lasting energy. It sticks in your throat and can't be readily consumed and resolved.

GR: Goodreads member Sara would like to know "what type of mood [Chuck] likes to be in while writing. I generally get the sense he is feeling adventurous, entertaining, and perhaps slightly excited while writing."

CP: To write I have to be in a dangerously manic mood, and I can usually achieve that state through conversation or exercise. Usually.

CP: Sorry, Virginia, but there is no Santa Claus. Nor is there a typical writing day for me. But since 1990, I have met with the same small group of writers. There we share and discuss our work. We've shared divorces, bankruptcies, newborns, illnesses, and triumphs; a few years back one of our longtime members died. The past 20 years supporting each other has been rather...epic.

CP: Weird and creepy but true, I've been reading lots of Judy Blume. Being a 48-year-old male reading about adolescent sex in Forever gets me lots of stares in airports. Of course, I'm reading them "to study her style." I swear. Honest. At this point I am an authority on menstruation.

GR: What will you be working on next?

CP: I'm just polishing a hideous novel called Damned that's structurally based on Are You There, God? It's Me, Margaret. It's about an 11-year-old girl who's condemned to Hell and has to cope—again, using an innocent-seeming form, I'm able to tell a more corrupt story. Moving to Hell is way, way worse than Margaret finding herself relocated to Long Island.

Great interview, makes me eager to read all of his books!

If Palahniuk is studying up on Blume's style, does that mean he's considering a dip into the YA market? I'm ever so curious! :)

Chuck is my favorite author of all time!! Can't wait to see him in LA this month!!!

Saw Chuck last night in Boston - what a great night! It was easily the most entertaining author event I've ever attended. I can't wait to read Tell-All.

That Judy Bloom quote was classic...

Saw C P on a Cdn show with George Strom.... good interview and he came off very brillantly. First time I heard of him and that prompted me to look up his works.
Sense of humour is classically dark and right up my alley for sarcasm. Will definitely read him next.

Amazing interview. Short but sweet, funny yet intreging. I've been a fan of chuck's for quite a while and still love his words. It's to funny he's reading one of my favorite authors. Can not wait for damned! :)

Judy Bloom is going to be an interesting perspective especially seeing as it's coming from Chuck. Just rented Choke... hope it lives up to its potential.

Very interesting post, think I can read all this books) Thank you for post. I wish you health.

Palahniuk gave an absolutely fantastic keynote address at this year's Muse and the Marketplace conference in Boston on May 2. Blew my mind in ways that were completely unexpected. Someone in the audience asked what he was reading and he told the Judy Blume story. Love it.

Loved the interview and love his books :)

still loving my beany power animal, the lion Chuck sent me along with all the other glorious goodie's... he is one of a kind and super inspiring to me as a brand new writer. I hope to reflect on how amazing my small writer's group is 20 years from now!

Glad I found this GR interview.

Great interview! I didn't realize he referenced Judy Blume's style when he wrote Damned! He's an amazing writer and his thoughts on his books is a great insight to his character! I laughed at the Hollywood comment!

"I'll show you the life of the mind!"

I wish you could attach pics. Just imagine John Goodman running down a burning hall toward you with a shotgun at the Hotel Earle. 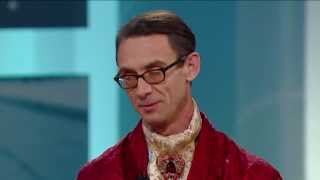