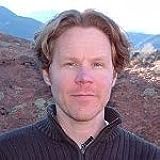 Each month we seek out a hidden gem from the vast Goodreads catalog, focusing on debut authors, independent publishers, and other literary folk not yet on the best-seller lists.

Colorado librarian Kirk Farber spends his working hours surrounded by books. Curiously, it was a song, "Letters from the Dead" by Nashville band the Silver Seas (formerly the Bees), that galvanized his fiction debut. Postcards from a Dead Girl follows the life of neurotic Sid Higgins, a telemarketer by profession and hypchondriac by nature, who is slowly driven mad by the frequent delivery of mysterious postcards from his dearly departed girlfriend, Zoe. With less diabolical intentions (we hope), Farber sent Goodreads a postcard from his home in Colorado.

Listen: Letters from the Dead
Courtesy of the Silver Seas.
New album, Chateau Revenge, out spring 2010.

Goodreads: What elements of the song, "Letters from the Dead," inspired you?

Kirk Farber: The lyrics are about a guy who is ruminating over postcards from a past relationship, and he's not sure what to do about them. Whenever I would listen to this melancholy song, I would start to wonder "what if" instead of finding postcards from a past relationship, they were actually being sent to you, and you weren't sure if that person was alive or dead. How would that play out? From there, I wrote several scenes very quickly, got the voice of Sid down, and sent him on his way.

GR: The character of Sid puts a human face on what many view as the scourge of the phone lines—telemarketers. Why this much-maligned profession for your protagonist?

KF: I chose the telemarketing job for Sid because one of his biggest problems is how disconnected he is from everyone. This job was one more way to show that. His employer, Wanderlust, uses a machine called "The Randomizer" to make the calls, so he sits at his cube and is randomly connected with the voices of strangers. It is a sad kind of job, and because Sid is a bit self-abusive, it seemed like a good fit. Also, he's surrounded by posters of happy people enjoying amazing travel to beautiful places, which is the exact opposite of his present experience, and I thought this was funny. His ex-girlfriend, Zoe, was also very interested in travel, and the postcards that are showing up from various European locations might have to do with Sid's chosen occupation.

GR: As a librarian, do you have any certain books or writers that you enjoy recommending to readers? Who are some of your favorite quirky characters from literature?

KF: I've always enjoyed Kurt Vonnegut's books, which seem to be filled with quirky characters trying hard to understand their own humanity. Billy Pilgrim from Slaughterhouse-Five has always been a favorite due to his emotional detachment, bizarre circumstances (being "unstuck in time"), and the strange way he sees the world. Another book I really enjoyed is Election by Tom Perrotta. The Tracy Flick character is so wrapped up in her ambition, you want to hate her, but she's so lonely due to her singular focus on winning, you can't help but feel bad for her. Other authors I enjoy reading are Douglas Coupland, Chuck Palahniuk, and Tim O'Brien.

I enjoyed this interview. It is always interesting to hear how writers come by their ideas for stories.
Carol

great, can't wait to read the book, AND get the new album!