Posted by Goodreads on September 8, 2009
4 likes · 21 comments
Massachusetts writer Anita Diamant's first novel, The Red Tent, reimagined a woman's life during biblical times. Earthy and detailed, Diamant's story of Dinah, Jacob's daughter, became a bestseller and book club favorite. This month Diamant explores another overlooked period. In Day After Night, four young women flee to Palestine immediately following World War II, only to be detained at Atlit, a prison camp for refugees run by the British. The novel examines individual reactions to the trauma of war and provides a glimpse into the early Palestinian-Jewish tensions in Israel pre-statehood. Diamant talked with Goodreads about having the guts to mix fiction with history and her Strunk & White-inspired love of simple prose.

Goodreads: So much has been written about World War II. For Day After Night, what inspired you to focus on the period immediately following the war?

Anita Diamant: Day After Night was hatched in 2000, when my daughter was a high school sophomore spending a semester in Israel. My husband and I went to visit—our first trip to Israel—and we spent a good part of the week accompanying the students on field trips. The Atlit prison camp has been turned into a living history museum, and the director of her program gave a spellbinding tour, which included a breathtaking and completely unfamiliar story. On October 15, 1945, all of the prisoners escaped to safety. I remember thinking, "Now there's a novel."

GR: More than 200 people escaped from Atlit camp that night. How much of the book is derived from the historical record of this event?

AD: The historical record is both clear and fuzzy. There are contradictory accounts of exactly what happened and where all the prisoners went. So while I tried to work from generally accepted facts (accounts in the English-language Jerusalem Post, for example) I told the story from the point of view of my characters, which gave me a fair amount of leeway in terms of details and perceptions.

GR: Relative to your other two works of historical fiction, The Red Tent and The Last Days of Dogtown, this new novel is much more contemporary. Did you have a lot more source material to work from? Does ample documentation make the writing process easier, or do known facts place more restrictions on the storytelling?

AD: Writing about the ancient Near East in 1500 B.C.E. means that no one can really challenge my recipe for goat stew. The closer you get to modern times, the easier it is to make mistakes. In my second novel, Good Harbor, which describes treatment for breast cancer, I was acutely aware of the need to be factually and emotionally accurate. With Day After Night, I rather expect to be challenged on my portrayal and interpretation of various events and locations, especially given that I read and heard varying accounts from people who were there, and even though I tried hard to be "accurate," avoiding factual errors or anachronisms.

I don't think that the known facts place restrictions on writing so much as enforce good research. My goal, in all my novels, is to convey a sense of how it might have happened, and what it might have felt like.

GR: Vivid female characters are a constant in your novels, which also tend to highlight female stories that have gone untold. How did you create your four central characters—Leonie, Tedi, Shayndel, and Zorah—and select their unique backgrounds and experiences in the war?

AD: Creating characters is a long process. It develops on the page as I write, rewrite, and revise. I really cannot give you a clear answer to this question; they unfold over time. But for some reason, getting the names right is a big first step.

I wanted very different experiences in these four women; only one experienced a concentration camp, for example. I was interested in exploring how one survives and reinvents oneself after trauma.

GR: After 20 years as a journalist and writer of nonfiction, you turned to fiction with The Red Tent in 1997. Now that you go back and forth between fiction and nonfiction, how dissimilar are the two writing processes? What do you enjoy about each?

AD: I find nonfiction writing much easier, probably because I have much more experience and thus more confidence in that form.

Fiction is much harder: so many choices, so many possible dead-ends. I like the clarity of nonfiction writing, and I enjoy the challenge of fiction. But they are not all that dissimilar in terms of revising and rewriting and refining the language to the simplest possible form. One of my editors said that they use different sides of my brain. I don't know if that's true, but I think the variety is good for me.

GR: Describe the kind of prose that you love to read. Are there any books you love to reread? How do you work at your own prose style?

AD: I am a fan of simple prose. Maybe I'm lazy, but I avoid works with ornate, elaborate sentences and paragraphs. I want to forget that I'm reading, at some point. For me, enchantment requires a kind of stylistic invisibility.

I work on my own style by revising, cutting, and depending on my reading group colleagues to help me "Omit Unnecessary Words," to quote my beloved Strunk & White.

AD: Descriptions of writing seem as boring as descriptions of golf games (but without the exciting putts or drives, or the prospect of thinking about Tiger Woods!). I get up, drink coffee, walk the dog, spend too much time on e-mail, and try to concentrate. The variations are all dependent upon where in the process I am; early on I'm reading or trolling the Internet for facts or visiting the library. Later on, I'm typing.

Dull. Really, dull. I am a slave to my deadlines, however. The fact that I do not turn in manuscripts late may be unusual; it's all due to years and years of writing for newspapers and magazines.

AD: Just finished Reading Lolita in Tehran and Persepolis 2, a graphic novel. The situation in Iran fascinated me, partly because my husband was born in Tehran. I'm always reading Billy Collins poems; they make me smile, feel grateful, and slow down.

AD: This fall is going to be nuts with touring, so I'm not starting a new book yet. I do have an idea for a novel and one for a short nonfiction book, so I'm doing some early research to see if either or both of those will achieve liftoff. But it's too soon to show my hand.

Howz Lolita in Tehran?is it worth to read it?

I enjoyed it. You really feel like you're experiencing Iran and all the conflict during the time period the story occurs.

Reading Lolita in Tehran is a great read. The author contends with increasing conservatism. Her college class puts the novel THE GREAT GATSBY "on trial". It's really interesting to read what the students had to say, and their arguments in favor or against the novel. It starts out slow but warms up considerably. I saw the author speak live, and she is even better in person.

Reading Lolita in Tehran is one of my favorites ... I've read it three times. I think it's an essential book for a true scholar of literature, because it helps one to understand how books are viewed/interpreted differently by other cultures.

Surprised neither Anita Diamant nor the interviewer mentioned the holocaust classic, Elie Wiesel's "Night". I assumed her title "Day After Night" contained a reference, giving a sense of closure to Wiesel's great but tortured masterpiece. The author surely could have, perhaps should have, mentioned him as an influence.

I also enjoyed Reading Lolita in Tehran, giving some hope to the victory of intellectual pursuits over fanatacism. We read The Red Tent in our book group and I've recommended it to others since then. I'm looking forward to getting a hold of Anita's latest book. I'm sure it will be just as well written. I'm not surprised she uses a lot of time on writing and rewriting.

"reading lolita in tehran" is exquisitly written...couldn't put it down...the location is almost irrelevant -- censorship on this level could and does occur globally. this is a true & inspiring account of how one group of woman adjust their daily lives to cope with their cultural and political realities. i must read it again!

Jeb wrote: "Surprised neither Anita Diamant nor the interviewer mentioned the holocaust classic, Elie Wiesel's "Night". I assumed her title "Day After Night" contained a reference, giving a sense of closure t..."

I've read "Night." It's sooooo powerful. I want to read Day along with the other book in the series. Most people don't know it's a series. Glad you mentioned "Day."

I think Anita Diamant wrote a book with the word "Dogtown" in it. I wanted to read that book. I had forgotten about it. I don't know the whole title. Sorry.

That's it. I missed it in the interview, "The Last Days of Dogtown."

I loved "Reading Lolita...." I think it's another great book.

OMG! I'm so relieved to see someone else who develops characters like that: give them a good name and let them become their own beautiful souls. The first time, I thought I was crazy, letting a bookful of characters take off and do that, because I didn't know if it would work, but it does. It's amazing!

It is captivating goodread

I do not how many of the people who posted above are working professionals...but I hardly seem to find time to read all those lovely books that catch my eye! I would love to hear some suggestions/tips on managing to enjoy a book and not compromise on professional life.
p.s: Thanks to Anita, I have decided to act on my forgotten urge to read Gabrial Garcia Marquez

I loved The Red Tent and cannot wait to read this new book but my first thought was that it was Exodus as told from the perspective of the Jewish survivors. Interesting no one else saw that similarity.

Reading Lolita in Tehran is wonderfu. Makes you appreciate our freedoms all the more.

After having visited Atlit last year, I found the book so interesting. I remember being so saddened by the history, of which I knew nothing. You characterized the facility (prison) so clearly, that I wept at times. We saw the "new and improved" version, but you clearly made the real "true picture" so vivid. Thanks for writing a book that allows others who haven't been to Israel and seen Atlit in person, to get a clear understanding of the British!!

Splendidly and lucidly written for all readership

This is a great interview. I'm going to be reading some of these books now. I've heard such great things about Lolita in Tehran!

Shari wrote: "This is a great interview. I'm going to be reading some of these books now. I've heard such great things about Lolita in Tehran!"

I agree.
I can't wait to read one of her novels! 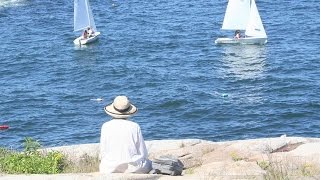