Posted by Goodreads on February 8, 2010
14 likes · 2 comments
Each month we seek out a hidden gem from the vast Goodreads catalog, focusing on debut authors, independent publishers, and other literary folk not yet on the best-seller lists.

[image error] Despite its age (nearly 3,000 years old), Homer's The Odyssey has never gotten dusty. The epic poem's immeasurable reach has inspired writers ranging from James Joyce to Arthur C. Clarke. This February, debut author Zachary Mason breathes fresh life into Odysseus's intrepid journey with a collection of apocrypha that delves into the unanswered questions and contradictions of Homer's poem. The Lost Books of the Odyssey offers a host of alternative plot lines for Odysseus and includes perspectives from unsung characters such as the Cyclops and Achilles. Mason shared with Goodreads one of the images that inspired him: Arnold Böcklin's painting, Isle of the Dead, where Odysseus may have ventured. 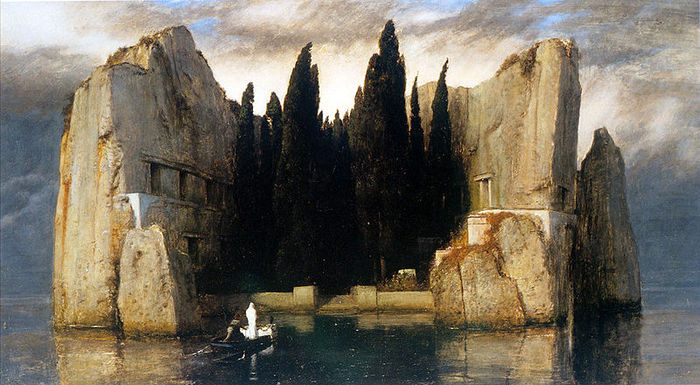 Goodreads: Who is your favorite character (god, mortal, or otherwise) encountered by Odysseus?

Zachary Mason: I'd choose not those Odysseus met among the islands but the islands themselves. I imagine them as numerous beyond measuring, like a sea full of scattered jewels, and in no place in particular. I like to think that Odysseus found only a few of the monsters and witches haunting the islands, that there were innumerable other dangers he missed by a hairsbreadth. It would be an archipelago of terror and beauty, full of islands small enough to know in their entirety, some empty, others inhabited by quietly reflective immortals—when the world was young, they pursued war and love, but now they keep to themselves, watching the waves roll in and the seasons go by. They have learned that memory is indelible, and their days would all be the same if they had their way, but now and then a mortal washes in, always uninvited, full of anger and busyness, and time moves forward.

Add The Lost Books of the Odyssey to my books »

GR: When did you first read The Odyssey? What inspired you to reimagine the story?

ZM: I was 12 when I first read The Odyssey. I have a pretty good memory for books generally, but my recollections of first reading Scylla, Nausicaa, Circe, and Argo are so strong that I can still see the blocks of verse on the page and the penciled notes in the margin (except that, most probably, I can't—most likely these are false images, amalgams of pure invention and later reading).

Inspiration: In his short story "The Gospel According to Mark," Borges wrote: "It also occurred to him that the generations of men, throughout recorded time, have always told and retold two stories—that of a lost ship which searches the Mediterranean seas for a dearly loved island, and that of a god who is crucified on Golgotha."

This made me think of the Odyssey not as a story but as a sort of primal substance, permeating Western literature; it also suggests that the essential scene of the Odyssey is less leaving Troy or coming back to Ithaka but being at sea, lost.

Another point of inspiration is Greek mythology's chimeric quality. The narratives appear to be straightforward (Theseus kills the minotaur, Medea kills her children, and so on), but on close examination the ancient sources are a cacophony, offering alternative versions of even the simplest and apparently most canonical events. Because the stories are densely interconnected, a change in one implies changes throughout, and so the uncertainties spread and ramify. I imagine the stories as threads under tension; I wanted to take this uncertainty and make a thread of it and weave it back in.

To return to Borges: He wrote that he had read few novels because they always contained something in excess; I wanted to write a novel with nothing in excess.

GR: Were there certain themes you sought to preserve and/or question in your retelling? Man's fate vs. free will? The hubris of Odysseus?

ZM: I was interested less in any broad themes than in the holes in the story. Athena, for instance, was Odysseus's constant guardian in the Trojan War, but on his journey home abandoned him, and the story gives no satisfactory reason why. Something else that interested me: If the Odyssey is central to the Western canon, what is central to the Odyssey? Is there some sequence of images that is the center of the book?

GR: There is a running debate among scholars as to whether Homer was a historical individual or just a name attributed to centuries of cumulative work by singer-poets practicing the oral tradition. Does the ambiguity of the historical record give you more license to make the story your own?

ZM: Go forward far enough in time and Homer and I look like contemporaries. It takes an effort of will to remember that the Trojan War was as remote from the golden age of Athens as the Middle Ages are from us. Perhaps future scholars working from fragmentary texts will say that the Homeric tradition wound on for three or four thousand years after the Trojan War, that toward the end it became austere and dream-like. Earnest dissertations will be written on the problem of bardic continuity from ancient Mycenae to the United States.

Amazing book. We added it to the curriculum at my former school in MN.