Posted by Goodreads on April 6, 2009
12 likes · 13 comments
Mike Tyson and Sylvia Plath have perhaps one thing in common: Joyce Carol Oates. Despite humble beginnings in a one-room schoolhouse in rural New York, Oates is one of the most prolific and acclaimed authors working today, with essays that canvas topics such as Tyson's boxing and Plath's poetry, and novels that relate the stories of hardy survivors and working-class characters. A three-time finalist for the Pulitzer Prize and oft-rumored favorite for the Nobel Prize, Oates has won over critics and readers alike with bestsellers such as We Were the Mulvaneys and The Falls. Her new work, Dear Husband, is a collection of short stories centered on the theme of families. Oates shared with Goodreads some reflections on her career that now spans 50 years.

Goodreads: You have earned a place among the great American writers of the last century. Do you feel that your writing is distinctly American?

Joyce Carol Oates: I consider myself a thoroughly American writer in the tradition of the great psychological realists—Melville, Hawthorne, Henry James—who nonetheless delve into the mythic and emblematic. Some of my "gothic" fiction is akin to Edgar Allan Poe, who wrote of the nightmare side of America while steadfastly refusing to acknowledge anything remotely historical, timely, or local in his fiction. Stendhal said famously of the novel that it is a kind of "mirror moving along a roadway"—this is true for my writing, but only partly true—I am obviously as much interested in the inner, unfathomable life of the individual as in his or her social identity.

GR: Your first short story, "In the Old World," was published in Mademoiselle 50 years ago, in 1959, while you were still a college student. Has your approach to writing changed over the decades?

JCO: My early fiction differs significantly from my later fiction: It is very much narrated, with an authorial "voice," while my more recent fiction is likely to be mediated through the voice of a character. Partly this is because I've been writing plays, which of course depend exclusively upon dialogue. My fiction now is more likely also to be "dramatized" rather than narrated.

GR: The stories cover a range of family issues, from infanticide and guilt to substance abuse and autism. What led you to use families as the organizing idea for the collection?

JCO: What led me, I am not certain. The stories predate the loss of my husband of 48 years in February 2008, so it was not the fact, or the trauma, of suddenly becoming a widow that precipitated this concern for family life. I have written a number of novels focusing upon family life—exploring relationships between individuals within families—among them We Were the Mulvaneys, The Falls, and, in a very different, darker vein, My Sister, My Love.

GR: At what age did you discover the power of literature? Do you have strong memories of reading at a young age?

JCO: The first books that utterly enthralled me were Lewis Carroll's Alice in Wonderland and Through the Looking-Glass. I was about eight at the time. I had always been a book-loving child, happiest when curled up with a book and/or trying to write little books of my own.

GR: How does your interaction with writing students at Princeton influence or inform your own work as a writer?

JCO: My teaching is primarily a wonderful, stimulating social experience—the stories which I assign to my students are familiar to me but always instructive to reread and to study—stories by Hemingway, Faulkner, James Joyce, Chekhov, and numerous contemporaries. I would not say that I "learn" anything specific from my students, but I am very involved with their work and try always to encourage them.

GR: Can you share any news about the status of the film adaptation of Rape: A Love Story, starring Samuel L. Jackson and Abigail Breslin?

JCO: This is a project of the director Harold Becker about which I know fairly little—I am not involved in the screenplay. I think that it is material ideally suited for Becker's dark, quirky vision and talent, and I look forward to seeing what he will do with it.

JCO: I try to begin work as early as possible, 8:30 a.m., perhaps, and I try to work until past noon or 1 p.m. I try again to write in the evening. Much of my writing is "remembering"—I imagine scenes, entire chapters while running or walking—I am very dependent upon this meditative quiet time.

GR: Who are some of your influences?

JCO: I am frequently reading to review for The New York Review of Books. I recently reread much of Flannery O'Connor in order to review the Brad Gooch biography.

JCO: I am going through the copy-edited manuscript of my next novel, Little Bird of Heaven, which Ecco/HarperCollins is publishing in the fall. Midway through this novel, my husband, Raymond, died—it's a novel of unexpected loss and the adjustment to that loss—it's also a strange, elliptical sort of love story.

I am also involved in writing a sequence of short stories about "widowhood"—the emotional, psychological, and dramatic consequences—perhaps this will turn into a book eventually. The first story, "Pumpkin-Head," appeared in The New Yorker in January, and subsequent stories will appear in Boulevard and in Conjunctions. The stories are both realistic and surreal as they develop, in ways surprising to me that I find fascinating. So much is said and has been written about such losses but there is no preparation for the actual experience, and that experience is somewhere beyond words so it is especially challenging to try to transform these inchoate feelings into prose.

Joyce Carol Oates books are like a rescue for me. Whenever I'm having a bad time, I read one of her books and I feel cathartically better. Like it's not impossible to continue. Book therapy.

Oates to me always seemed as one of the most strikingly honest authors. She writes beautifully, but I feel some of that beauty comes from her fearlessness to dive into the grit of the human mind and actions. Love love love her books/stories.

I have been reading the books of Joyce Carol Oates as I find them all great literary works. I was sure for the last several years that she would bag the Nobel Prize for Literarture

i've read one book by JCO , the Mulvaneys and thought:" why haven't i read more of her" more men should read her stuff, gonna be on my 'to read ' list in the years to come

How good to read writing with depth. Like other art, while you are reading or looking or listening, you can feel the sense or senses your are using, physically move, your eyes or ears actually change in movement; when your read Oates,your mind moves.

I have to admit that I have never read anything by Joyce Carol Oates but I am starting to read much more literature by woman writers and great American writers so I will get round to some of her writing very soon.

I never read one of the books but i will start read has per now, when iam in the bush i get bold and the only sounds of birds and Animals, i like my job Tours my carrier.

I've only read The Gravedigger's Daughter. Although it was clearly well written, I didn't enjoy it all that much. I'd be willing to give her another go: Can anyone suggest an "if you only read one Oates novel, make it this one" novel?

Fell in love with Joyce Carol Oates with "Upon The Sweeping Flood" many years ago and have read and loved her evermore. The ever-expanding pregnancy in "Bellefleur" was one of my favorite descriptions of hers. "Assassins" a fav.

Joyce Carol Oates is a wonderful writer and woman.In France where I live, she is vastly read both in French and in English.Her diary is also a jewel, like all her books and short stories.
Hope she'll keep writing for a long long time !

What a great interview ! The questions were some I have wanted to ask myself ! She is such a superb author and an interesting person as much as I know . It would be so lovely if she would open up a bit more and share with her readers where she really comes up with the ideas in her writings . The stories and novels are so realistic . She pulls you into a world and it is hard to walk away from that world when the story is over.
~ Dawn 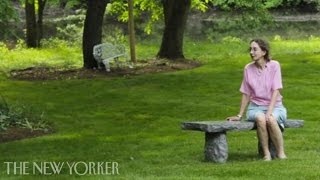