"In Bed" with Chris Ayres 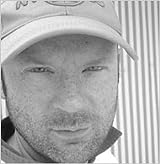 It's no surprise that Chris Ayres has a penchant for Evelyn Waugh. The British author and London Times journalist has a history of predicaments that would make any satirist proud. In his memoir, War Reporting for Cowards, the reluctant (and terrified) war correspondent bought his fluorescent gear at a camping store, and in Death By Leisure: A Cautionary Tale, Ayres covered the Michael Jackson case in all its hooplah, went out on a limb with a negative amortization mortgage, and met women (including his wife!) by selling furniture on Craigslist. We asked him to recommend his top five ironic books.

Day of the Locust by Nathanael West
"I was going to suggest The Great Gatsby here, for the colossal irony of its title, but West's noir classic—I think of it as a Wes Craven-directed sequel to Gatsby—is more apt for our times. Besides, the contrast between Todd Hackett's day job in Tinseltown and the desperate nihilism of 1930s Los Angeles supplies its own beautifully wretched irony. West clearly feared that a combination of economic hardship and celebrity-mania would give rise to an American fascist."

Give War a Chance by P.J. Rourke
"The funniest nonfiction book title of all time? At the very least, a reminder that 'Republican wit' doesn't have to be an oxymoron. While P.J. states that "the Marine Corps does more to promote world peace than all the Ben &amp Jerry's ice-cream ever made," his bloodlust is (mostly) ironic, and if taken with the correct amount of salt can be consumed with great enjoyment by both right and left alike."

Slaughterhouse Five by Kurt Vonnegut
"Before Hiroshima and Nagasaki there was the Allied firebombing of Dresden, which Vonnegut witnessed firsthand. Slaughterhouse Five is essentially his memoir, albeit one that uses an unhinged, UFO-abducted alter ego to supply the narrative. Amid the overwhelming sadness there is also the blackest of hilarity. After Dresden is burned to the ground (children, trying to escape the flames, are boiled alive in water towers), an American foot soldier is arrested by the German authorities. His crime? Stealing a teapot from the ash. He is put on trial and shot by a firing squad."

Scoop by Evelyn Waugh
"I think of this novel as being the 1930s pop-culture equivalent of Tina Fey's 30 Rock, only with the antics taking place behind the scenes at a Fleet Street newspaper (The Daily Beast). The plot sees a nature correspondent named William Boot being sent to Africa through a case of mistaken identity to cover a war. His many blunders include packing a canoe, just in case. Having been sent into combat under similar circumstances, I can vouch that none of this is as far-fetched as it reads."

I read that Chris Ayers is a communist and
a personal, pre-presidential friend of Obama.
Is that true?

You should read 'Foreign Fool' by Alan Platt. Hilarious, ironic, raunchy examples of misadventures and embarrassments around the world, mostly in exotic places.