"In Bed" with a Vampire Heir - Dacre Stoker 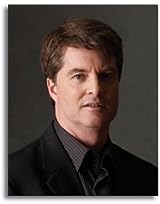 From ghastly Nosferatu to sexy Edward Cullen, no vampire is free from the influence and mythology of Dracula. Bram Stoker's original Transylvanian prince, conceived in 1897, was a bloodthirsty and sinister aristocrat who met his end at the point of a knife—not, as many assume, the point of a stake. Perhaps he may rise again to hunt those who hunted him? Now, more than 100 years later, Stoker's great grand-nephew, Dacre Stoker, and Dracula historian Ian Holt have drawn upon Stoker's original notes to write Dracula: The Un-Dead. This eagerly anticipated book is the first Dracula story authorized by the Stoker family since the 1930s. As an homage to his great grand-uncle, Dacre shares with Goodreads his favorite vampire books—aside from the original Dracula, of course!

"The modern horror master is one of my all-time favorites. This book modernizes the genre as a realistic horror story with modern-day vampires in small town Maine—very eerie indeed."

Interview With the Vampire by Anne Rice

"I like the way her vampire characters wrestle with heavy moral and philosophical dilemmas. This book started the very popular Vampire Chronicles and stands out as one of my favorites."

I am Legend by Richard Matheson

"Vampires take over the planet and run out of food. A great new take on the story of the undead."

They Thirst by Robert R. McCammon

"An army of vampires take over Los Angeles—an epic story of good versus evil."

The Tale of the Body Thief by Anne Rice

"Lestat, a centuries-old vampire gets the chance to be human again. His struggle and torment make for a fascinating tale."

This list will be awesome for when Halloween rolls around!

Great list! I would add "Dracula My Love" by Syrie James. Love and the monster from Mina Harker's point of view. Loved the book!

I love I Am Legend, it's fantastic book. I also like Interview With a vampire.

Anne Rice has got to be the best out of all for my taste...

I Am Legend is one of my all time favorites!