Posted by Goodreads on April 3, 2018
30 likes · 6 comments
Debut author Adrienne Young has a deep love for history and "girls with bared teeth"—the fierce females who ultimately inspired her Viking-age YA fantasy. Sky in the Deep follows the journey of a young warrior named Eelyn whose life changes forever when she sees her brother fighting with the enemy on the battlefield—the same brother who died five years before. Goodreads asked Young to share what drew her to Viking culture as well as recommendations for books featuring strong women.

Adrienne Young: I find this time period fascinating for many reasons. But more than anything, it was the role of women. Compared to other women of their day, Viking women had a freedom and power that were unheard of. The dark, mystical mythology and spirituality of this age also really drew me in.

GR: In what ways did Viking women have power and freedom?

AY: Viking culture was still male-dominated, but, comparatively, women held roles and rights that were really uncommon for European societies of that time. Women could fight alongside men, own property, had a say in their own marriage partners, and could initiate divorce on their own.

Most surprising to me was that there was an entire set of laws that protected women from unwanted attention, harassment, and assault, with harsh penalties. That's pretty amazing when you think that even the United States didn't have laws like that until the 1960s, and until the 1970s for the U.K.

GR: Were there any particular Norse myths or Viking spiritual practices that stood out to you?

AY: The most interesting element of Norse mythology is the human-like nature of the gods. This made the relationship between the gods and the people really unique. There was a connection between land, gods, and people that I think is really incredible and inspiring.

The focus on the afterlife also really hooked me. The emphasis on the afterlife and the commitment to it was paramount in the Viking belief system. It's one of the reasons this culture was known for its bloody battles and ruthlessness. They weren't afraid to die. There are also a lot of deep witchcraft and folk magic roots that have influenced so many modern religions, having a worldwide reach.

GR: Your main character, Eelyn, is a young woman who was raised to be a warrior. Is this a norm in Eelyn's clan or is she an exception?

AY: It's absolutely the norm. It's not something that is noticed or discussed because her strength doesn't make her special in any way. She was raised to be a warrior like many other girls in her clan, and that idea is really beautiful to me because it doesn't become the story.

GR: Why do you think it's important for YA readers to meet characters like Eelyn?

AY: I think it's important for readers to see female characters like this because in so many stories with a "strong female lead," the main character is fierce as a result of something bad or broken. Don't get me wrong. I like stories like that, too, but I wanted Eelyn to just be who she was with no apology, explanation, or justification.

Most importantly, I didn't want her strength to be the product of something negative. She's a warrior, but the point of the book is not to prove how badass she is. The real story is about what happens in her heart, and it's what transforms there that makes her the most brave.

GR: What books do you recommend for fans of fierce warrior girls or mythology?

Error rating book. Refresh and try again.
Rate this book
Clear rating
1 of 5 stars2 of 5 stars3 of 5 stars4 of 5 stars5 of 5 stars
Norse Mythology
by Neil Gaiman
This collection of short stories is so accessible with its humor, action, and bite-size mythology for both readers who are new to the world and those who have long lived in it. Gaiman captures perfectly the human-like nature of Norse gods and their unique relationship with humans.

Adrienne Young's Sky in the Deep is now available at a bookstore near you. Don't forget to add it to your Want to Read shelf! Be sure to also read more of our exclusive author interviews and get more great book recommendations.

Well, my god, this is such a beautiful interview. "The real story is about what happens in her heart, and it's what transforms there that makes her the most brave." Tell them!!! Ugh, I love this book already.

I agree Morgan, this sounds like an amazing novel already.

I'm looking forward to reading this!!

Just pre-order based on this interview alone. So excited!

I loved this book, we need more YA like this one! 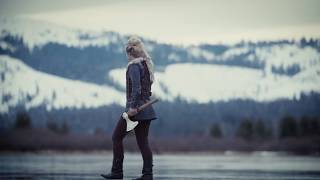