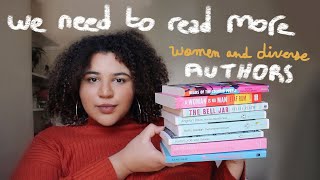 WATCH THIS IF YOU ARE NEW HERE

Cinderella Is Dead
by
Kalynn Bayron

topics: all | new | unread
Discussion Board

Friends in This Group

You have no friends in the The Well-Read Society group. Invite some »

Her Body and Other Parties
by
Carmen Maria Machado
Jul 31, 2020
view »

For many people, music is an important part of our life. It’s a way of expressing our feelings and ourselves, escape the pains of real life, bring relief, reduce stress, have fun and is connected to most of our dearest memories. Music plays a more important role in our life than just being a source of entertainment.
The two books you will choose between have the element of music in the story. With characters that either have dreams about becoming a star, or continuing the art of a recently passed friend. The authors Tiffany D. Jackson and Angie Thomas are both African-American women, with works that leave a mark when you are done reading.

HERE ARE THE BOOK TITLES AND THEIR DESCRIPTIONS

On the come up by Angie Thomas

On the come up tells the story of sixteen-year-old Bri, who wants to be one of the greatest rappers of all time. As the daughter of an underground hip hop legend who died right before he hit big, Bri's got massive shoes to fill. However it's hard to get your come up when you're labeled a hoodlum at school, and your fridge at home is empty after your mom loses her job. So Bri pours her anger and frustration into her first song, which goes viral for all the wrong reasons.


Let me hear a rhyme by Tiffany D. Jackson

Let Me Hear A Rhyme tells the story of three Brooklyn teens who plot to turn their murdered friend - Steph - into a major rap star by pretending he is still alive and, in the process, solve the mystery surrounding his death.  And with everything riding on Steph’s fame, they need to decide what they stand for or lose all that they’ve worked so hard to hold on to—including each other.

CAST YOUR VOTE IN THE POLL BELOW

Why are you flagging this group?