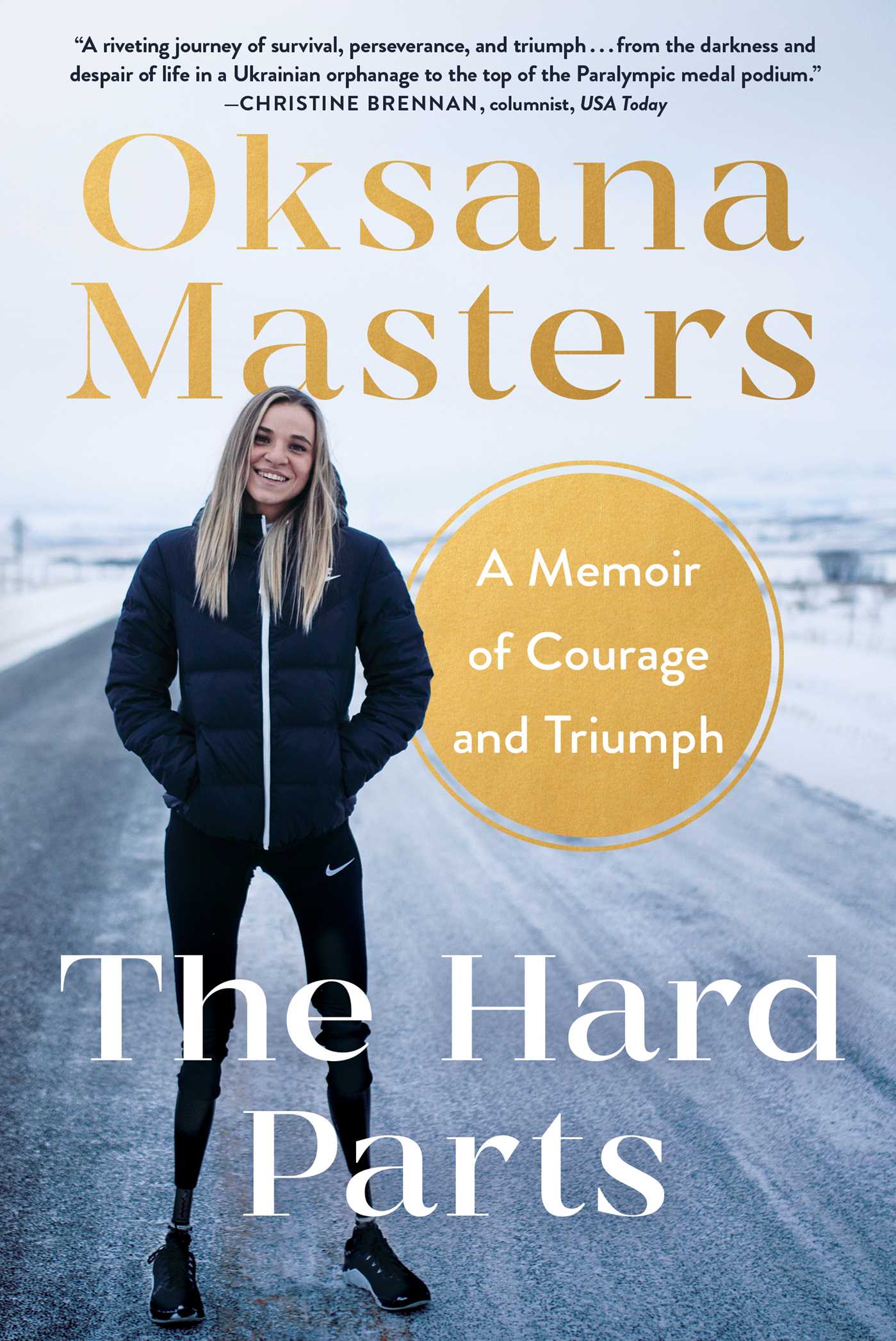 The Hard Parts: From Chernobyl to Paralympic Champion—My Story of Achieving the Extraordinary

Enter Giveaway
Oksana Masters, the United States’ most decorated winter Paralympic or Olympic athlete, tells her jaw-dropping story of triumphing over extraordinary Chernobyl disaster-caused physical challenges to create a life that, by example, challenges everyone to push through what is holding them back.

Oksana Masters was born in Ukraine—in the shadow of Chernobyl—seemingly with the world against her. She was born with one kidney, a partial stomach, six toes on each foot, webbed fingers, no right bicep, and no thumbs. Her left leg was six inches shorter than her right, and she was missing both tibias.

Relinquished to the orphanage system by birth parents daunted by the staggering cost of what would be their child’s medical care, Oksana encountered numerous abuses, some horrifying. Salvation came at age seven when Gay Masters, an unmarried American professor who saw a photo of the little girl and became haunted by her eyes, waged a two-year war against stubborn adoption authorities to rescue Oksana from her circumstances.

In America, Oksana endured years of operations that included a double leg amputation. Still, how could she hope to fit in when there were so many things making her different?

As it turned out, she would do much more than fit in. Determined to prove herself and fueled by a drive to succeed that still smoldered from childhood, Oksana triumphed in not just one sport but four—winning against the world’s best in elite rowing, biathlon, cross-country skiing, and road cycling competitions. Now considered one of the world’s top athletes, she is the recipient of seventeen Paralympic medals, the most of any US athlete of the Winter Games, Paralympic or Olympic.

This is Oksana’s astonishing story of journeying through a series of dark tunnels—and how, with her mother’s love, she finally found her way into the light. Her message to anyone who doesn’t fit in: you can find a place where you excel—where you have worth. 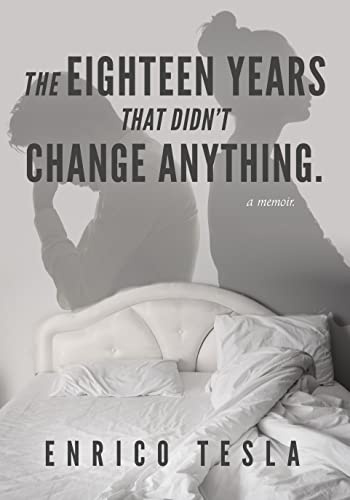 The Eighteen Years That Didn't Change Anything: A Memoir

Enter Giveaway
A revolutionary book by a new author. A memoir that transcends an individual experience to go to the heart of who we are and what is our purpose.

Mr K. is a 40-year-old professional living in London. He wants to settle down and have children. Ms S. is beautiful and intelligent. She is all that Mr K. wish for. However, is the will of a person enough to see their dreams fulfilled? Are we all destined to accomplish our ambitions? And, what do you do when you realize your hopes are slowly slipping away from you?

The Eighteen Years That Didn’t Change Anything is a book about a betrayal and a frustrated love. However, Enrico Tesla is a new author and he is out to surprise you. He will use his life to prove his theory in the same way a scientist carries out an experiment. Will you be able to raise any exception to it?

5 stars review from Readers Views website. Paige Lovitt writes: "I find the idea of looking back and reflecting on why a relationship did not work, from his perspectives, to be fascinating. I think readers will also find this to be very interesting" 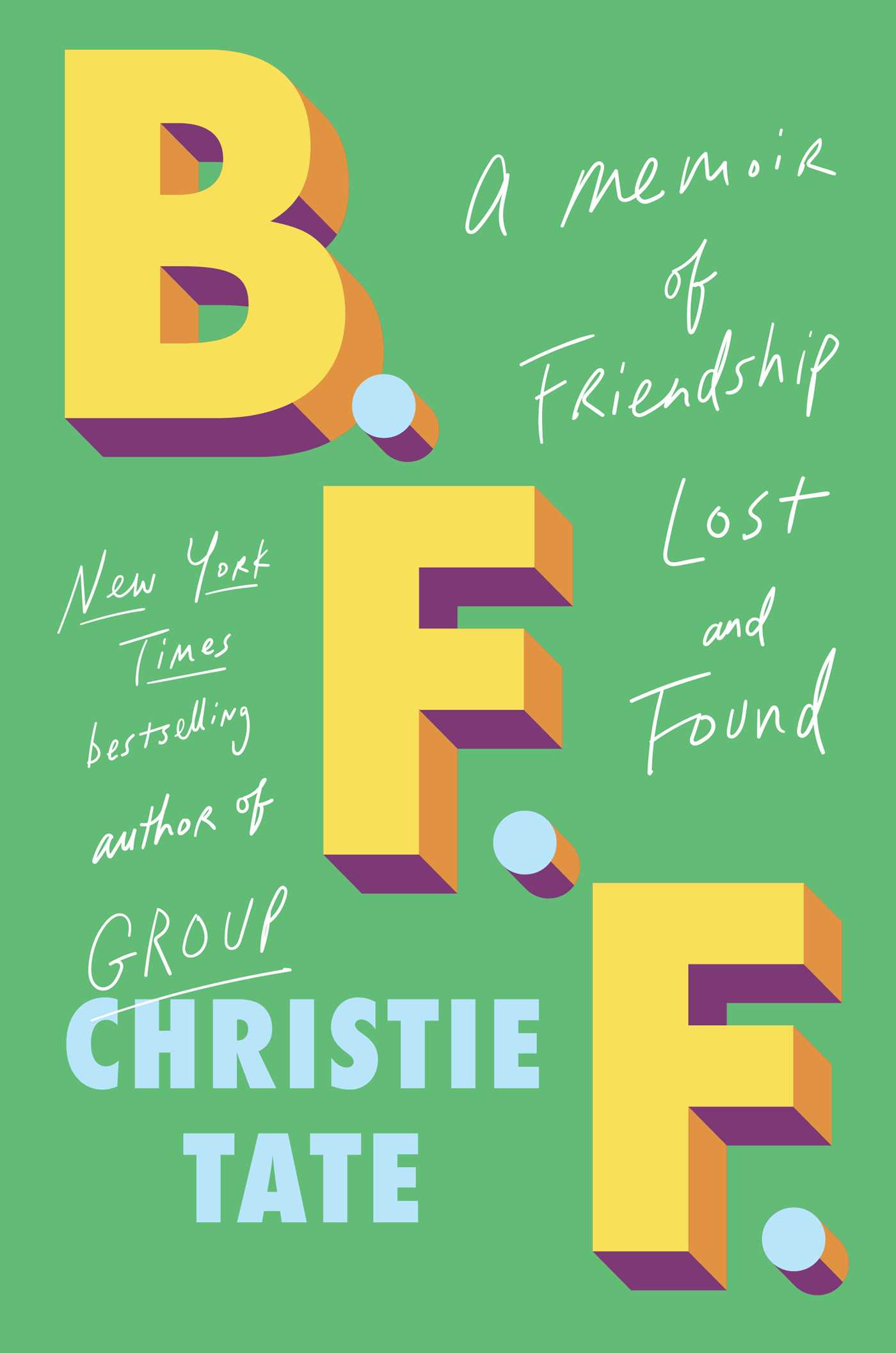 B.F.F.: A Memoir of Friendship Lost and Found

Enter Giveaway
From the author of Group, a New York Times bestseller and Reese’s Book Club Pick, comes a moving, heartwarming, and powerful memoir about Christie Tate’s lifelong struggle to sustain female friendship, and the friend who helps her find the human connection she seeks.

After more than a decade of dead-end dates and dysfunctional relationships, Christie Tate is feeling hopeful after finally finding a loving man who doesn’t drink. Her days of agonizing in group therapy over guys who won’t commit are over, the grueling emotional work required to attach to another person tucked neatly into the past.

Or so she thought. Weeks after giddily sharing stories of her new boyfriend at Saturday morning recovery meetings, Christie receives a gift from a friend. Meredith, twenty years older and always impeccably accessorized, gives Christie a box of holiday-themed scarves as well as a gentle suggestion: maybe now is the perfect time to examine why friendships give her trouble. “The work never ends, right?” she says with a wink.

Christie isn’t so sure, but she soon realizes that the feeling of “apartness” that has plagued her since childhood isn’t magically going away now that she’s in a healthy romantic relationship. With Meredith by her side, she embarks on a brutally honest exploration of her friendships past and present, sorting through the ways that debilitating shame and jealousy have kept the lasting bonds she craves out of reach—and how she can overcome a history of letting go too soon. But when Meredith becomes ill and Christie’s baggage threatens to muddy their final days, she’s forced to face her deepest fears in honor of the woman who finally showed her how to be a friend.

Poignant, laugh-out-loud funny, and emotionally satisfying, B.F.F. explores what happens when we finally break the habits that impair our ability to connect with others, and the ways that one life—however messy and imperfect—can change another. 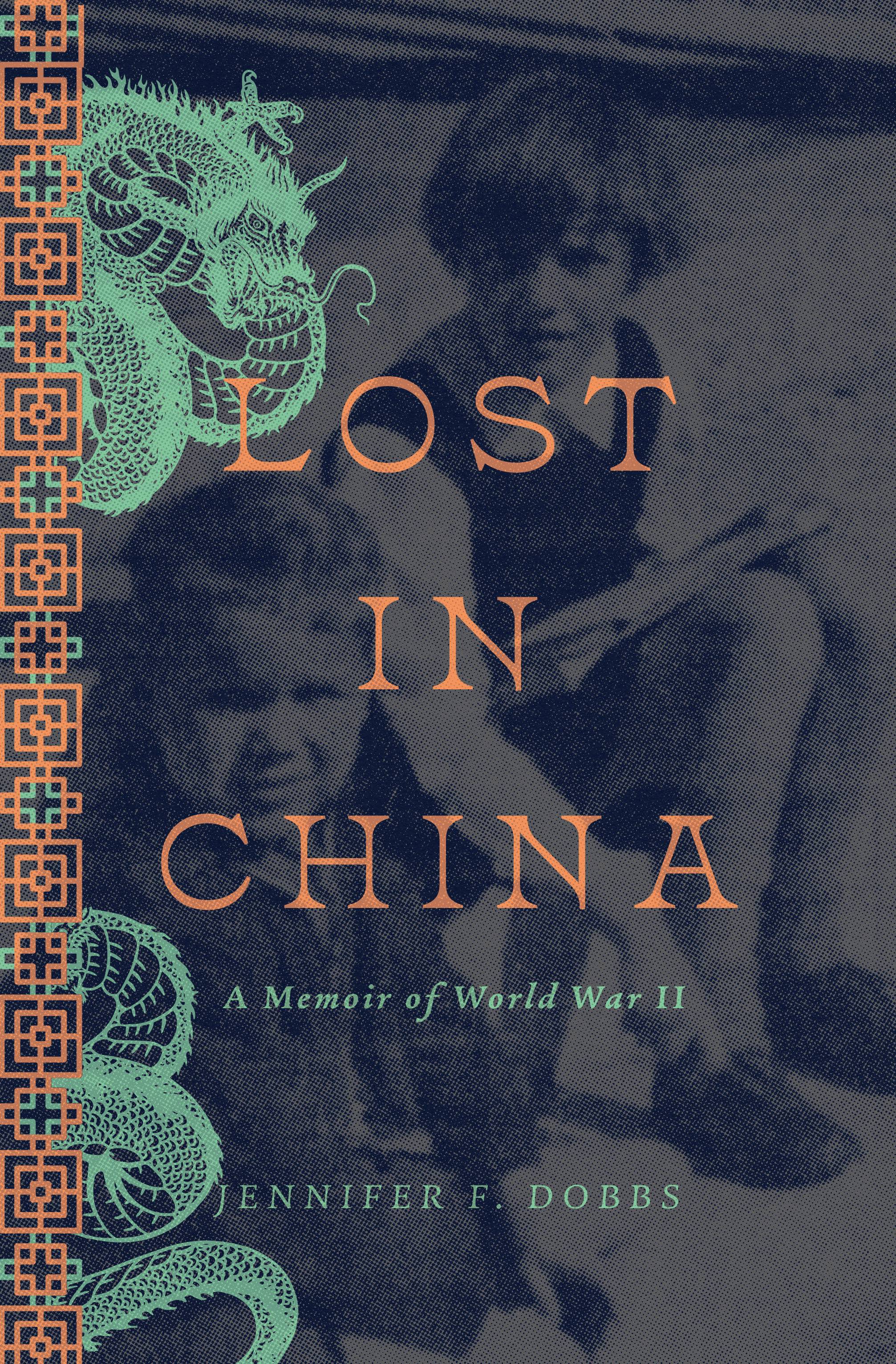 Lost in China: A Memoir of World War II

Enter Giveaway
It’s November 1941. Siblings Jennifer and John, ages seven and five, huddle in a cement culvert near Kunming, China, while Japanese Zeros fly overhead. Jennifer pretends to ignore the screech of gunfire. Where are Daddy and Mummy? she thinks.

Lost in China is the true story of two Anglo-American children separated from their parents in China during World War II, and their unforgettable journey to America a year later. The Dobbs family lived in Shanghai in the late 1930s, where the children spoke Mandarin and Jennifer rode to school in a rickshaw. As war progresses, the family travels to heavily bombed Chungking, through mountains harboring bandits, and on the dangerous Burma Road. When their mother and father fly to Hong Kong on a short trip and get caught up in the Japanese attack, the Dobbs children are left parentless, with no idea when their parents will return—or if they are even still alive.

For a year, the children remain in Western China, and the two are separated when John is taken to stay with another family, where he survives a near-drowning incident. Finally, after spending a month traveling three-quarters of the way around the world via the US military’s World War II ferry routes, they reunite with their mother in a rain-swept, deserted airfield in Washington, DC—and face a shocking discovery about their father. Lost in China is both a riveting firsthand account of a family broken apart in World War II China and a daughter’s tribute to her beloved father. 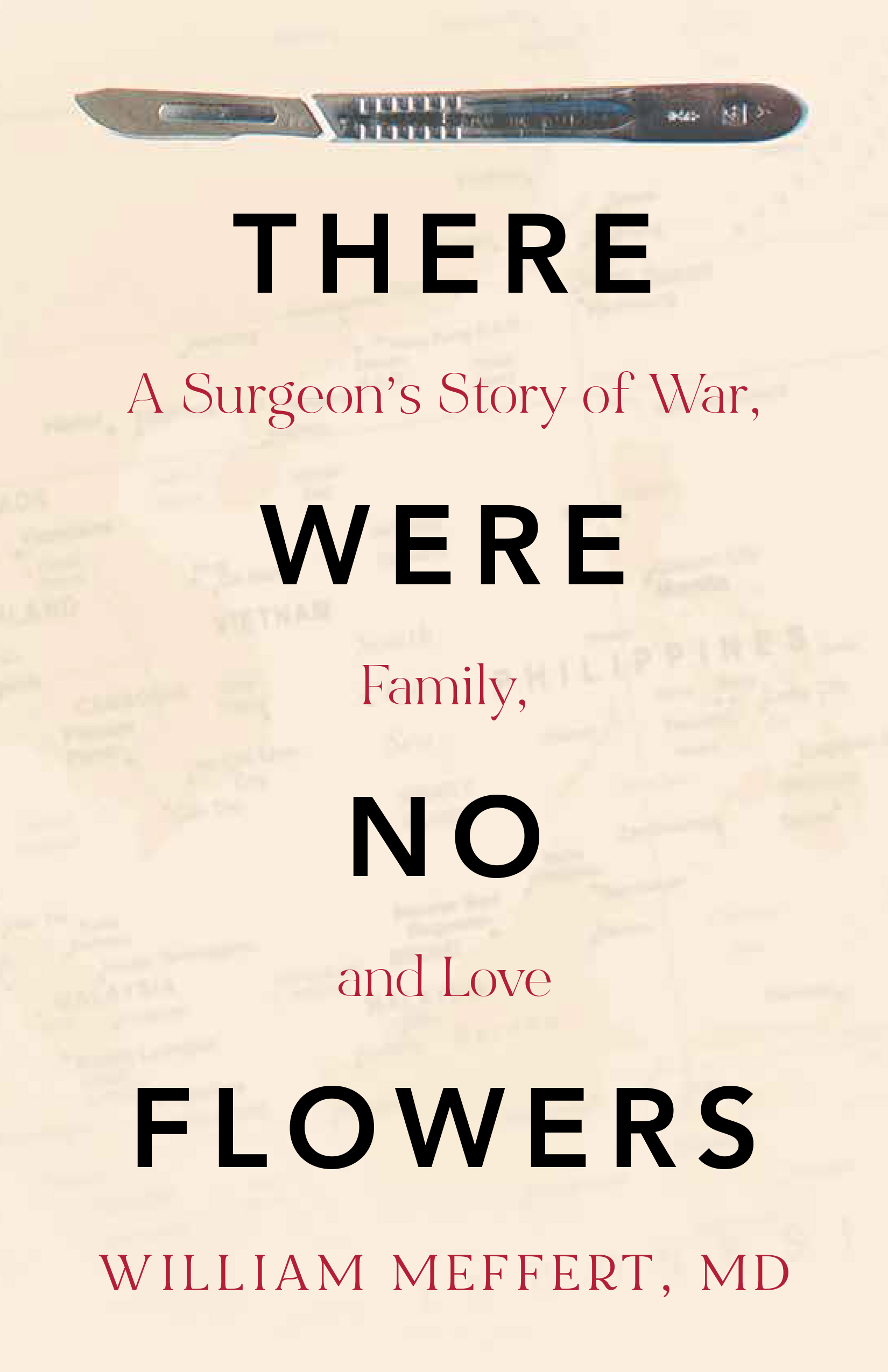 There Were No Flowers: A Surgeon's Story of War, Family, and Love

Enter Giveaway
William Meffert is a surgeon. His father was a surgeon. And now, so is his son. Three generations familiar with incisions, blood, and loss. From World War II and Vietnam to modern operating rooms, they have all fought the battle for human life. Now, Meffert journeys with his son to chart his family’s history through the changing world of combat surgery and beyond to reveal the universal truths that connect them across generations.

As Meffert travels with his son to field hospital locations of World War II and Vietnam, they encounter detailed memories of trauma surgery, wounded soldiers, and the effects of war—a stark reminder of its cost on humankind. Throughout, Meffert meditates on the lasting impact of conflict and the pressures of a surgeon’s life, from being forced to make immediate life-or-death decisions for unknown patients, to the realities of blood and gore, to the difficulty of sharing these experiences with the uninitiated.

Linking together the individual lives of grandfather, father, and son, There Were No Flowers is a story of war, surgery, trauma, and the joys of fatherhood, family, and love in the face of it all.
Displaying 1 - 5 of 13 giveaways
Giveaways you've entered 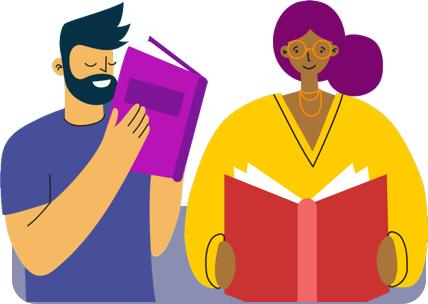