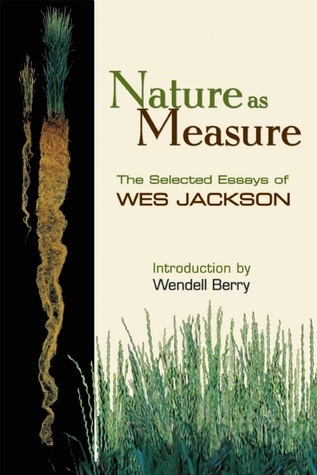 Nature as Measure: The Selected Essays of Wes Jackson

4.35
54 ratings5 reviews
Rate this book
Wes Jackson can teach us many things about the land, soil, and conservation, but what most resonates is this: The ecosphere is self-regulating, and as often as we attempt to understand it, we are not its builders, and our manuals will often be faulty. The only responsible way to learn the nuances of the land is to study the soil and vegetation in their natural state and pass this knowledge on to future generations.

In Nature as Measure, a collection of Jackson’s essays from Altars of Unhewn Stone and Becoming Native to This Place, these ideas of land conservation and education are written from the point of view of a man who has practiced what he’s preached and proven that it is possible to partially restore much of the land that we’ve ravaged. Wes Jackson lays the foundation for a new farming economy, grounded in nature’s principles and located in dying small towns and rural communities. Exploding the tenets of industrial agriculture, Jackson seeks to integrate food production with nature in a way that sustains both.

4.35
54 ratings5 reviews
5 stars
29 (53%)
4 stars
17 (31%)
3 stars
6 (11%)
2 stars
2 (3%)
1 star
0 (0%)
Displaying 1 - 5 of 5 reviews
Paul Peters
55 reviews
May 20, 2019
Wes Jackson was my college biology teacher and track coach. Then we were drinking buddies at NC State in graduate school. Wes is one of the people who greatly influenced my life and remains a friend. Wes should have been a preacher but his gospel is the ecosystem but greatly influenced by the other one, no doubt. In my opinion he is a better speaker than writer, but that's not to say he isn't a great writer too. Maybe I should say he is a prophet rather than a preacher. He sees what others don't. He makes connections that others miss. No system is too larger or small for his penetrating gaze. These essays are an inspiration.
Trish Remley
391 reviews2 followers
April 8, 2019
"What those interested in sustainable agriculture need always to keep before us are these questions: How are we going to run agriculture and culture on sunlight? What are we going to do when the oil is gone? What are we going to do to stop soil erosion? Ecosystem agriculture has answers to all of these questions. Molecular biology has few or none." Said in a nutshell by Wes Jackson, founder of The Land Institute located in Salina, KS since 1978. Introduced to Wes Jackson's ideas by Dr. Clark Gantzer in 1984 while doing soil conservation/soil erosion research.
Lisa
314 reviews20 followers
April 22, 2019
An excellent argument for planting more perennials and creating more diversity in our farmlands. Some great points, which I will investigate further.
Mark Gowan
Author 3 books9 followers
January 11, 2016
Wes Jackson has become one of my favorite agricultural writers. His style is lucid and easy to read. His points are clear and he does not mince words. Jackson takes a staunch stance against industrial agriculture and his arguments are strong. In this collection of essays, Jackson rails against what he refers to as “petroleum-based chemical agriculture” claiming that our reliance upon it is unsustainable as well as unethical.

However he reminds us that “no important change in ethics was ever accomplished without an internal change in our intellectual emphasis, loyalties, affections, and convictions.” According to Jackson, to change the suicidal path that we are on as a species we must give up the intellectual emphasis, our loyalty to and love for as well as the conviction that technology will save us from having to change our lifestyle. Jackson’s answer to this belief is an emphatic: it will not.

Jackson not only hits upon scientific, social and cultural attitudes but also on religious influences upon our beliefs that we can persevere without changing how we think about our food and hence the environment we live in. Religion, according to Jackson, “helped us adopt a subject-object dualism. It made it easy for us to regard the environment as inherently alien…”

At the core of the problem is our motivation and basis for happiness: money. Jackson claims, “We have sent our topsoil, our fossil water, our oil, our gas, our coal, and our children into that black hole called the economy.” He calls out our education system for failing societies by offering “only one serious major: upward mobility.”
To all of this, however, Jackson offers clues to change based upon one necessary component: “To live in right relation with [our] natural conditions…”

Nature as Measure cuts through the rhetorical crap of modern day media and so- called scientists and science as well as political dichotomies that make vague clear decisions that need to be made and does so in a refreshingly direct and no-nonsense manner. However, Jackson points out something that Geddy Lee (of Rush) sings so eloquently: the truth is sometimes contrary, something that Jackson does not shy away from.
David
325 reviews8 followers
September 1, 2014
I enjoyed this collection of essays by Wes Jackson but disagree with him that nature is the ultimate measure of our success in agriculture. I think the "garden" should be our standard and I think his work points to the fact that man can be an improver of raw nature.
Displaying 1 - 5 of 5 reviews