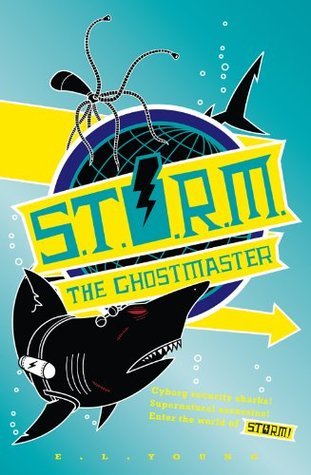 3.96
226 ratings17 reviews
Rate this book
STORM are . . .Will Knight: 14. Inventive genius. Creates cutting-edge gadgets.Andrew Minkel: 14. Software millionaire. Founder of STORM.Gaia: 14. Brilliant chemist with a habit of blowing stuff up.Two high profile burglaries have hit the headlines in Venice. CCTV footage shows a strange spectral form at the crime scenes and the thefts are soon dubbed the work of Il Fantasma – The Ghost. STORM – called to investigate – suspect that the Ghost is part of a larger, more sinister plan – involving a secret cult, quantum computers, and a plot to plunge the world into chaos . . .Armed with brilliant brains, high-speed boats and a mass of mind-boggling gadgets can STORM find the mind behind the mayhem – the unknown Ghostmaster?Biographies

8 books20 followers
E.L. Young is a science and technology journalist with extensive knowledge of the gadgets that appear in the story, all of which are based on real-world inventions or projects currently in development. Young writes for New Scientist, a British science magazine, also published in the United States. She learns about the latest and most important research in all kinds of fields and gets to go directly to the scientists for the full story – which helped in writing the STORM series. STORM: The Infinity Code marks her worldwide fiction debut.

The Storm Operatives are back in another action-packed adventure. This time Will, Andrew, and Gaia are up against something even more dangerous than that found in STORM: THE INFINITY CODE.

Two burglaries have hit the headlines. Why? Because the thing in the video is a strange spectral form that doesn't leave any prints behind and doesn't look human, earning it the name Il Fantastma or The Ghost.

A girl, named Cristina, witnesses The Ghost steal a precious heirloom so she goes after it, only letting STORM know of her plans. After she goes missing, STORM takes the case and goes on the trail of an unknown, deadly, smart criminal, who wants to plunge the world into chaos.

STORM: THE GHOST MACHINE was an adventure filled with twists and turns. There were some surprising twists that kept you on the edge of your seat. The book can be read as a stand-alone, but if you want more background information on the characters, it's better if you read the first book. Even if you haven't read the first book, though, you won't be lost, and you will be sucked into this book. Young sure shows off how much research she did to make sure that the weapons used were believable and didn't seem too "out there."

Fans of the ALEX RIDER or YOUNG BOND series' will definitely love this one.

Tom Hooker
568 reviews6 followers
April 15, 2010
STORM is a team of teenage technological geniuses who work to save the world in each book of their series. In this one, A ghost appears to be operating in Venice, stealing items of great value. At the request of another precocious teen living in Venice (the victim of one of the thefts). They travel to Venice, where they discover that a mentally deranged former team member has more sinister plans.
Joanna
33 reviews
June 25, 2011
I bought this book for my son, but decided to read it too. And good thing I did, because - in my opinion, this is the story that will appeal to readers of all ages, grabbed me straight away, full of action, quick read and some scientific info as well.I am not scared of ghosts any more:) I could not put it down and finished it before my son.
Quinn
3 reviews
December 14, 2011
First book I read in the STORM series. Can't find ' The Infinty Code' in library, haha... Anyway, this book is action-packed, filled with suspense, definitely worth recommending. Will's gadgets are awesome!;)
Judy
360 reviews1 follower
November 30, 2012
I enjoyed the first book in the series, but this one left me cold. The characters are flat and some of the gadgets are unbelievable, despite the author's notes. However, many readers in grades 3-6 will probably enjoy it.
Mathew
9 reviews
Read
February 20, 2013
Just Started: Sorry Ms. Zitelli. I think I missed a couple Goodreads, it took me a while to find a new book to read.

I wasn't sure how to make up Goodreads so I just read a lot. Hope it works!
Elegale
138 reviews2 followers
March 23, 2016
I really really enjoyed the action, the gadgets, the science and mystery...But the missing star goes to the fact that the rich girl was written as 'snobby and too proud'. Does the author have something against rich people?
Beth/Sr. Elizabeth
268 reviews3 followers
August 1, 2009
I love the gadgets, said to be based on real world inventions.

Denise Jukniewicz
80 reviews1 follower
February 11, 2010
I actually read the book and loved the action and suspense. Fans of Alex Rider and the "H.I.V.E." series should like this book.
Jeremy Leung
3 reviews
March 17, 2010
I haven't read it yet, but it looks cool
Tiffany
427 reviews8 followers
July 6, 2010
I didn't read all of this book. It upset me because the bad guy was manipulating and hurting children. I liked the first one much better.