Goodreads helps you keep track of books you want to read.
Start by marking “Jung on Synchronicity and the Paranormal” as Want to Read: 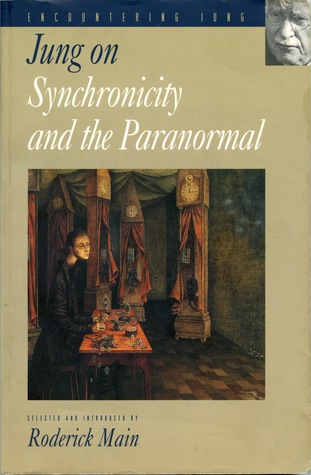 We’d love your help. Let us know what’s wrong with this preview of Jung on Synchronicity and the Paranormal by C.G. Jung.

Preview — Jung on Synchronicity and the Paranormal by C.G. Jung

Jung on Synchronicity and the Paranormal


In his introduction, Roderick Main discusses Jung's encounters with and observations of the paranormal, the influences that contributed to his theory of synchronicity, and the central ideas of the theory itself. The selections include Jung's writings on mediumistic trance phenomena, spirits and hauntings, anomalous events in the development and practice of analytical psychology, and the divinatory techniques of astrology and the I Ching. The book also features Jung's most lucid account of his theory in the form of his short essay "On Synchronicity," and a number of Jung's less-known writings on parapsychology, his astrological experiment, and the relationship between mind and body.

Jung on Synchronicity and the Paranormal addresses subjects that were fundamental to Jung's personal and professional development. Probing deeply into the theory of synchronicity, Roderick Main clarifies issues that have long been a source of confusion to Jung's readers. ...more

To ask other readers questions about Jung on Synchronicity and the Paranormal, please sign up.

Outside of the Box

Start your review of Jung on Synchronicity and the Paranormal

Feb 11, 2013 Dianna rated it it was amazing
Brilliant – a must read for anyone who wants to understand Jung's theory of synchronicity in-depth.

Feb 20, 2019 Wilde Sky rated it liked it
A collection / analysis of a man's influence / fascination with the paranormal.

The introduction part of this book was quite interesting, but it could have been clearer / more concise.

In this anthology Roderick Main has done something quite interesting: even as Jung discloses a personal encounter with a ghost and other paranormal activities, including seances, Main provides linkages to some of the more under-discussed implications of quantum mechanics as they may apply to possible theories of paranormal experiences. Jung was very interested in the modern theories of physics because he saw a tangible theoretical and/or philosophical link between them and what his experiences with and ideas about paranormal experiences were leading him to think and theorize about psychology and the paranormal.

I particularly and thoroughly enjoyed the letters that were included, and not just because I love writing and reading 'heavy' philosophical letters too, but because Jung's informal writing is delightful to read. He relaxes his careful official persona, and expresses some of his unsupported speculations and ideas as to the nature of things inexplicable, such as the meaning of life, in ways always thoughtful, but frequently funny, too.

His face-to-face encounter with a ghost in a British farm house is particularly interesting because my reading of the encounter entangled it to me in one of the most interesting and quite frankly bizarre fushigis I've ever experienced. I have blogged it in 2012.02.02 — Half Face and More fushigis.

Despite this being about the 'airy fairy' concepts of synchronicity and ghosts, mediums and seances, Jung kept his writing and speculations and experiences 'real'. He doesn't leap to conclusions with his experiences, but allows them to challenge and question his pre-formulated beliefs about what may or may not be so-called reality. And in the process he challenges the validity of our ideological fixation on a rationalistic causal — 'Descartian' science. Unlike much of western science, perhaps especially the behaviourists who dismiss as unreal that which falls outside the bounds that their theories delineate, Jung proves his stature as a real scientist by neither dismissing nor idealizing his paranormal experiences: they become simply a part of the chisel that Life provided him to chip away at our false ideas and thinking, even if it is stingy in providing additional clues.
On reflection I am not sure what I expected to read before I began reading JoS&tP, but it turned out to be a far, far better read than I'd anticipated. Perhaps it was the inclusion of so many letters and extracts from letters, which I'd not read before except in tiny citations.

Also, my prejudice regarding the word 'paranormal' lead me to anticipate something other than what Jung explored, which is a very scientific, coherent, and sound argument that our scientific foundation in causal biased rationalism is not just misguided, but inadequate to explain the full range of what happens within the so-called bounds of life.

I highly recommend this book: a solid five stars.

To see my blogged review, complete with images, links, and extended citations, go to: 2012.04.28 — Jung On Synchronicity and the Paranormal edited with an introduction by Roderick Main. ...more
View all 15 comments

May 11, 2012 Doug Dillon rated it it was amazing
Here we have an excellent selection of Carl Jung's writings and talks on Synchronicity and the Paranormal. If you are interested in either or both subjects, this book is a valuable source straight from the mind of one of the world's great thinkers. The first to make the case that coincidences are not just random events, it was Jung who coined the term Synchronicity.

Associate of Albert Einstein, William James and Wolfgang Pauli, Jung makes it very clear how new discoveries in physics during the Here we have an excellent selection of Carl Jung's writings and talks on Synchronicity and the Paranormal. If you are interested in either or both subjects, this book is a valuable source straight from the mind of one of the world's great thinkers. The first to make the case that coincidences are not just random events, it was Jung who coined the term Synchronicity.

Associate of Albert Einstein, William James and Wolfgang Pauli, Jung makes it very clear how new discoveries in physics during the 20th Century influenced his work. In story after story, he also relates fascinating paranormal experiences of his own, using them to support his theory of Synchronicity. Even more than that, his words offer a wonderful peek into the man's thought processes by detailing his personal explorations of things such as spiritualism, astrology, I Ching, visions, dreams, life after death, and even UFOs.

In discussing Synchronicity, Jung relies heavily on his views of "archetypes"and "the collective unconscious". I found those portions of the book a little dense and hard to read. I'm not even sure if having a background in Jungian Psychology would be of help but maybe so. However, when Jung launches into his many personal, paranormal experiences, I found a clarity and authenticity to his words that made them a joy to read.

Although I don't think Jung made a complete case for his theory of Synchronicity, he did indeed point the way for others. ...more

May 16, 2008 Ryan rated it liked it
When I first picked up this book, I was struck by Jung's involvement in early 20th century spiritualism and astrology, which to my eye was discrediting. Upon revisiting the book, I found fascinating anecdotes in the other sections which stimulated plenty of speculation. Conclusion: a mixed bag with some taste of the truth.
Importantly, Jung hints that a deep investigation of psychology reveals paranormal content.

Feb 10, 2015 Heath Nevergold rated it really liked it
Not so far out as you would think. Attempts to define the supernatural as scientifically as posible.

Jul 17, 2013 Guillermo Galvan rated it it was ok  ·  review of another edition
A mediocre collection of spooky ghost stories told by grandpa.

Mar 14, 2009 Bob rated it really liked it
Interesting book by Carl Jung, famous rival to Freud, who was much more open to non materialist view of the universe.

Changshaochen rated it it was amazing
Nov 26, 2017

Catalin Constantinescu rated it really liked it
May 18, 2012

Pippa Halliday-Chambers rated it it was amazing
Jul 31, 2017

The central concept of analytical psychology is individuation—the psychological process of integrating the opposites, including the conscious with the unconscious, while still maintaining their relative autonomy. Jung considered individuation to be the central process of human development.

Jung created some of the best known psychological concepts, including the archetype, the collective unconscious, the complex, and synchronicity. The Myers-Briggs Type Indicator (MBTI), a popular psychometric instrument, has been developed from Jung's theory of psychological types.

Though he was a practising clinician and considered himself to be a scientist, much of his life's work was spent exploring tangential areas such as Eastern and Western philosophy, alchemy, astrology, and sociology, as well as literature and the arts. Jung's interest in philosophy and the occult led many to view him as a mystic, although his ambition was to be seen as a man of science. His influence on popular psychology, the "psychologization of religion", spirituality and the New Age movement has been immense.

Trivia About Jung on Synchroni...