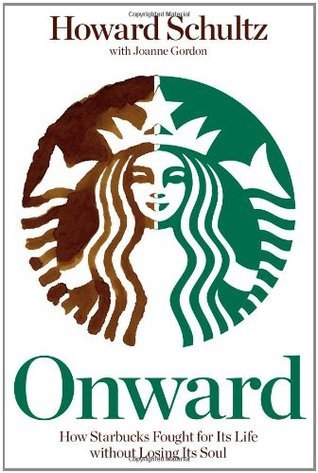 Onward: How Starbucks Fought for Its Life without Losing Its Soul

3.85
28,085 ratings1,151 reviews
Rate this book
In 2008, Howard Schultz, the president and chairman of Starbucks, made the unprecedented decision to return as the CEO eight years after he stepped down from daily oversight of the company and became chairman. Concerned that Starbucks had lost its way, Schultz was determined to help it return to its core values and restore not only its financial health, but also its soul. In Onward, he shares the remarkable story of his return and the company's ongoing transformation under his leadership, revealing how, during one of the most tumultuous economic times in history, Starbucks again achieved profitability and sustainability without sacrificing humanity.
Offering readers a snapshot of a moment in history that left no company unscathed, the book zooms in to show, in riveting detail, how one company struggled and recreated itself in the midst of it all. The fastpaced narrative is driven by day-to-day tension as conflicts arise and lets readers into Schultz's psyche as he comes to terms with his limitations and evolving leadership style. Onward is a compelling, candid narrative documenting the maturing of a brand as well as a businessman.

Onward represents Schultz's central leadership philosophy: It's not just about winning, but the right way to win. Ultimately, he gives readers what he strives to deliver every day - sense of hope that, no matter how tough times get, the future can be just as or more successful than the past, whatever one defines success to be.

21 books272 followers
Schultz is an author and businessman. He was born on July 19th of 1953. He is mostly known for owning Starbucks; he is also the CEO and chairman of that company.
He graduated Northern Michigan University with a bachelor's degree in Communication.
Schultz authored the book Pour Your Heart Into It How Starbucks Built a Company One Cup at a Time with Dori Jones Yang in 1997. His second book Onward How Starbucks Fought for Its Life Without Losing Its Soul with Joanne Gordon, was published in 2011.