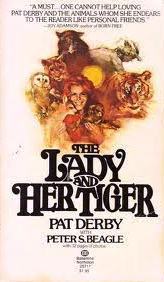 The Lady and Her Tiger

3.84
51 ratings9 reviews
5 stars
15 (29%)
4 stars
15 (29%)
3 stars
19 (37%)
2 stars
2 (3%)
1 star
0 (0%)
Displaying 1 - 9 of 9 reviews
Laura
296 reviews15 followers
January 20, 2013
This was one of the most traumatizing books I've read in a long time. I wanted to get a peek into the head of the woman who currently runs the PAWS Sanctuary that is so much in the news recently, and damn, this does that for certain. First, whatever else it may be, it is beautiful -- the writing is some of the best I've seen in an animal trainer's book (probably helped that she had the pen of an experienced fantasy novelist to support her). This is the first trainer's book that did no sugar-coating of the industry or of her own actions. She describes one pointless animal abuse and death after another, and it is heartbreaking. Her conflicting emotions and mental torment over being part of an industry that she hates is screaming from the pages. She's crazy and hypocritical and she knows it, openly acknowledging it throughout. It certainly puts in perspective why she would be running a sanctuary for performing animals 40 years later, as she repeatedly states that she wishes she could save all animals from people just like herself.

On a personal note, it was very very hard for me to read all of the horrible things from her perspective that occurred at Ralph Helfer's ranch (despite her insistence on changing names, it could be no one else she was describing), because it was Toni Helfer's book that first made me fall in love with the idea of exotic animal training when I was about 12 years old.

Theresa
968 reviews17 followers
November 17, 2018
I had the good fortune to know Pat Derby for 20+ years before she died a few years ago. I loved her spirit and her dedication to animals. This book is the story of how she came to devote her life to animals she rescued from circuses, zoos and parts of the entertainment industry. In it you will get to know some of the animals, like Chauncey, the Mercury cougar, and Sweet William, the badly abused bear she saved. She was my animal hero. Her legacy lives on with her partner, Ed Stewart, who still runs PAWS (Performing Animal Welfare Society) located in San Andreas, California.

Patricia
Author 3 books44 followers
January 10, 2012
I bought this book when we were at the animal preserve in San Andreas that Pat Derby is affiliated with. She was actually present at the open house we attended and autographed my book. The book covers her childhood in England and then her early years as an animal trainer. I actually enjoyed it a lot more than I expected do. The book I bought is kind of low quality paper with tiny print and it has a different cover than the one pictured here. I was curious after visiting the preserve and listening to the docents talk about the way the animals were managed and wanted to learn more. Derby calls her method of training "affection training" and she describes how her methods evolved. The book has pictures of her with the animals and all in all it is a fascinating read. I'll be going back to PAWS, because the place has a serene and loving feel. I'm happy to have more background about the woman behind the organization.

Cathi95
353 reviews
October 29, 2011
(Non-fiction 1976) Pat Derby, current co-owner of PAWS, tells her life story and learned lessons in caring for wild animals up to 1978. There's a lot of anger in this book, and a lot of stories about the journeys animal rights have travelled. I'd like to read a more current book covering her life in Galt and San Andreas. It's a little, tiny book.

Renee Abbot
8 reviews
November 5, 2009
I loved this book, but it was hard to read. I think I cried many times. Every animal lover should read this book!
Amy
2 reviews38 followers
July 18, 2011
I read this book as a teenager and absolutely loved it.

Chantille
53 reviews
June 20, 2016
Every animal lover should read this book. I learned so much and it had me in tears multiple times.