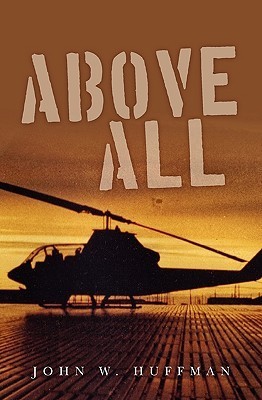 4.20
41 ratings7 reviews
Rate this book
Above All is a lighthearted action-adventure set in the waning stages of the Vietnam War which pits a consummate warrior against the political strangulation that rendered our armed forces virtually incompetent. It is a comical but sordid tale of a roguish gunship pilot and his nemesis, a petty commanding officer, who loathe each other at first sight. As fierce adversaries, they encompass the chaos of that era accompanied by a coven of nurses and a clandestine army of misfits who portray the best-and worst-of our country during that painful event. Their saga is one of love and lust, hope and despair, valor and cowardice, awash in a deluge of demoralizing apathy as they face the bitter ending of the conflict.

John enlisted in the Army Airborne in 1966 and served two tours of combat duty in Vietnam, the first as a private, and subsequently a sergeant, with Alpha Company, 1/27th Infantry, 25th Infantry Division, in 1966-67, the second as an officer/aviator with the 120th Aviation Company in 1972-73. John retired as a major in 1986 with three Purple Hearts, three Bronze Stars, sixteen Air Medals, one Army Commendation Medal, two Vietnamese Cross of Gallantry Medals, and various other service and campaign ribbons.

John has received Seven National Book Awards for A Wayward Wind, The Baron of Clayhill, Tiger Woman, Above All, America's Diplomats, The Road To Attleboro, and Eyes of the Blind. His latest releases include Cold Hearts Burning and Searching For Leah. John is currently working on Witches' Hollow and When A Rebel Comes Home.

John resides in the Blue Ridge mountains of North Carolina, with his wife Misty, and has three sons and four grand daughters.

A book reader knows he's received a gift when he gets to the final page and wants more - when the reader stubbornly wishes to linger in the story, to remain in the company of the characters, just a bit longer.

Author John Huffman has that touch, and 'Above All' is that type of gift. In each of his previous books, Huffman consistently ferries his readers through the most human of stories, and he does so again with this solid tale of courage and cowardice, humor and honor.

Hop in. Buckle up.
Whitney
5 reviews
April 8, 2011
This Huffman novel unfolded to me like a slow sipping whiskey. I had a shot before bed each night, savoring the taste, the feel and the warmth of each scene. John W. Huffman brings to life the vivid and very human side of war through a wildly colorful cast of characters that you will love and laugh with, cry and honor...and never forget. When Above All came to a close, as does every good bottle of slow sipping whiskey, I found that I was tempted to tip it to my mouth, and search for one last drop!
Javier Robayo
Author 4 books50 followers
March 8, 2012
Above All gave touched every emotion from beginning to end. The characters are so memorable. The story shows quite a different side from everything I've come to know about the Vietnam conflict. An entertaining tale, irresistible, I couldn't put it down. I've read it several times and it is still a joy to read. Wonderful, wonderful story

Jeannie Walker
Author 10 books567 followers
May 20, 2012
I thought this was an extraordinary novel by an extraordinary man. He writes from the heart and tells it like it was. I would highly recommend this novel and his others to everyone.
Royalreader
8 reviews1 follower
April 11, 2012
This was so well written and exciting read. Mr. Huffman is definitely a good author. No wonder he has won so many awards.
Jaime
7 reviews
May 20, 2012
a war tale with a lot of humor, able to captivate me, as a reader, until the end.
William B.
101 reviews2 followers
May 13, 2017
That's Why They Call It Fiction

This was a fun book to read, by I never had to remind myself it was fiction. However, it correctly characterizes the Vietnam War.
Displaying 1 - 7 of 7 reviews