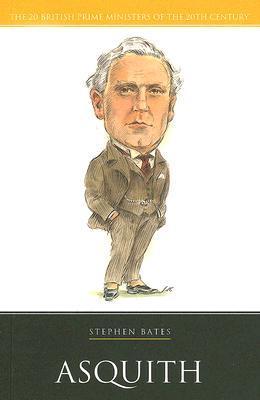 3.50
10 ratings2 reviews
Rate this book
Herbert Asquith was a Liberal politician and prime minister from1908-1916. Asquith's administration laid the foundation of Britain's welfare state, but he was plunged into a major power struggle with the House of Lords. The hereditary upper chamber vetoed the budget of 1909, and in 1910 Asquith called and won two elections on this constitutional issue, and the Lords eventually passed the 1911 Parliament Act, ending their veto of financial legislation. Asquith was Prime Minister on the outbreak of World War I, but his government fell in 1916 as a result of the 'Shells Scandal'.

36 books4 followers
Stephen Bates has worked as a journalist for the BBC, the Telegraph, the Mail and, for 23 years, as political correspondent at the Guardian. He is the bestselling author of Church at War and God's Own Country.

Penny Loaves and Butter Cheap, Stephen Bate's kaleidoscopic picture of Britain in 1846 is in all good bookshops and available in ebook now.

3.50
10 ratings2 reviews
5 stars
2 (20%)
4 stars
3 (30%)
3 stars
4 (40%)
2 stars
0 (0%)
1 star
1 (10%)
Displaying 1 - 2 of 2 reviews
Chris Harrison
61 reviews2 followers
April 15, 2022
Another in the series of political biographies concentrating on British Prime Ministers. I read this a few years ago when reading about the politics of the late 19th and early 20th Centuries. This is a very readable account of Asquith's life and the political situation he faced. Together with Lloyd-George he must take credit for many of the changes that eventually led to the post Second World War Welfare State. He also though faced constitutional battles with the House of Lords which with an overwhelming Conservative majority blocked much of the Liberal Government's reforming legislation. This eventually led to the 1911 Parliament Act that removed the Lords veto of financial legislation and other moves that clipped the wings of the second chamber. Asquith was Prime Minister in the early part of the First World war but was manoeuvred out of power and replaced by Lloyd-George as result of controversy regarding supplies of shells. One interesting thing I didn't know before reading the book was that when called to be Prime Minister after the resignation of the dying Campbell-Bannerman, Asquith travelled alone by public transport to Biarritz where the King was spending the summer in order to "Kiss Hands". Admirably succinct and yet informative fior someone wanting an overview of the man and his politics.
Rob
99 reviews
April 20, 2022
6/10
Displaying 1 - 2 of 2 reviews