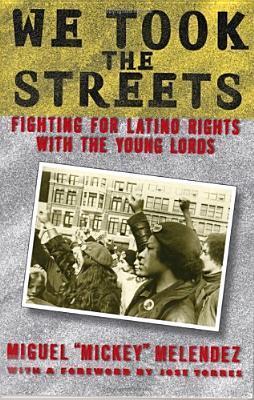 We Took the Streets: Fighting for Latino Rights with the Young Lords

3.96
131 ratings15 reviews
Rate this book
In 1968 Miguel “Mickey” Melendez was a college student, developing pride in his Cuban and Puerto Rican cultural identity and becoming increasingly aware of the effects of social inequality on Latino Americans. Joining with other like-minded student activists, Melendez helped form the central committee of the New York branch of the Young Lords, one of the most provocative and misunderstood radical groups to emerge during the 1960s. Incorporating techniques of direct action and community empowerment, the Young Lords became a prominent force in the urban northeast. From their storefront offices in East Harlem, they defiantly took back the streets of El Barrio. In addition to running clothing drives, day-care centers, and food and health programs, they became known for their media-savvy tactics and bold actions, like the takeovers of the First People’s Church and Lincoln Hospital.

In this memoir, Melendez describes with the unsparing eye of an insider the idealism, anger, and vitality of the Lords as they rose to become the most respected and powerful voice of Puerto Rican empowerment in the country. He also traces the internal ideological disputes that led the group, but not the mission, to fracture in 1972. Written with passion and compelling detail, We Took the Streets tells the story of how one group took on the establishment—and won.

"Rage is also an understandable result of witnessing or being subjected to severe injustice. To ignore the reality of such a feeling is not the answer. Rage can be understood as a symptom of moral awareness, as a wake-up call coming from one's conscience. How to turn that anger into a creative and positive impulse in the struggle for a more decent and fair society, is the true challenge, a lifelong quest."
Puerto Rico was a colony of Spain until the Spanish-American war of 1898, then through the "Treaty of Paris," Puerto Rico, Guam, Cuba and the Philippines became US colonies. Since then, Puerto Rico has been beholden to the US and is currently a commonwealth of the US. Puerto Ricans have similar rights and obligations as US citizens (such as the military) but Puerto Ricans do not pay federal taxes and do not participate in national elections.

Photo Credit
Some of the Young Lords most famous community actions include the garbage offensive, lead offensive and and church offensive.

"When a community stands together and makes a strong statement, it will be heard. On this occasion, something had been done to address the problem. The same happened in all Young Lords offensives; it became our mantra; a balance of embarrassing the state, the city, and public and private institutions, and being able to present popular solutions to address the issues at hand."
The Young Lords broke apart after COINTELPRO intervention into their activities, and the death of one of their leaders.

Ms.Caprioli
265 reviews1 follower
November 5, 2019
A good account of the formative years of the Young Lords surrounded by autobiographical information. Easy to read and full of details.

Mark
23 reviews2 followers
May 11, 2008
One of my favorite books. Written in a very accessible manner. For folks who aren't in the know, The Young Lords were a revolutionary Puerto Rican organization mainly based in New York. Some people refer to them as the Puerto Rican version of the Black Panthers.

The author, a former member of the Young Lords, conveys a lot of great stories of some of the actions they took. For example, they wanted the local hospital to serve the local community needs more, but the administration wasn't responding, so they took over the hospital auditorium and set up a clinic for the community. My memory is a little fuzzy, because it's been a couple of years since I read it, but I think they did some simple things like testing for certain diseases, as well as setting up a very successful drug rehabilitation program. Matter of fact, it was so successful, the hospital ended up adopting it and still exists today I believe.

I think I found those type of stories inspiring, because they served people's basic needs and they didn't take no for an answer. When the government or some other institution was unresponsive they still took action and made the system work for them. When the city was collecting garbage in their communities, they pushed the garbage into the middle of the street and set it on the fire. This attracted the press and forced the city to deal with the problem. At some points they have been a little immature and I think its dangerous to fall into the trap of romanticizing militant-like actions, but I think it helped me think outside of the box in terms actions that can be taken to better the community.

Unfortunately, like a lot of revolutionary groups from that time period, they seemed to fall into the trap of being too ideological and dogmatic.
Ezra
55 reviews
June 25, 2008
This book is great! I've been talking about it all over the place - I didn't know very much about the Young Lords and this book tells the stories of a lot of their direct action and organizational history with a great grounding in the history & culture of Puerto Rico and Nuyoricans.

BUT! I borrowed this book from Michelle and she warned accurately that you read the book constantly feeling like "why don't you ask some women about their experience!?!" though Melendez does acknowledge the women's movement in Young Lords I still left feeling like the analysis was only as deep as "women were empowered, we men kind of recognized it, we fucked things up in the movement by cheating on our women partners constantly."

Still an excellent book and great resource!
Davina
27 reviews30 followers
February 25, 2009
Melendez took me through a solicitous and receptive journey of the YLP, which also includes crucial parts of his own experience as well. I feasted on the descriptive cultural tidbits and their struggle to understand who they are on their own terms. A definite must read for today's youth of color, many of whom who feels or has no connection to the larger society and d the inflicted trauma we are accustomed to by our social and emotional conditionings. The YLP is a def. legacy for they gave most of us a footing when we didn’t think it was possible in the urban 60s-80s. And even today. Si, se puede.
Allan
155 reviews1 follower
November 2, 2014
Good book for those wanting to know about the Young Lords. I was not familiar with the overall history of the movement; so this book is a good primer. After reading it, I would say that a definitive book about the subject has not yet truly been written. Books on the subject are few, so this book is a must read for anyone interested in the movement.
Maria Tortuga
12 reviews
November 13, 2007
The Young Lords were very flawed, but it makes their successes even sweeter. Despite their failures they did a remarkable amount of good for New York and the fact that their crazy tactics actually worked should be an inspiration for all of us who spend our days trying not to go against the grain.
Mary Ann
89 reviews2 followers
April 30, 2013
I questioned the validity of this book, the deeper I got into it. Liked it until their philosophy changed from social reformers to militants w a manifesto. They totally lost their way and completely fell apart.
James Tracy
Author 10 books44 followers
February 13, 2008
Essential memoir of the NY Young Lords. Accessible, lots of context. Reads like having a beer with an activist elder.

Seven
74 reviews6 followers
June 10, 2008
Power to the Peoples.
Leticia Pamela
6 reviews2 followers
August 5, 2009
Interesting, but poorly written. In my opinion, Melendez over analyzes his role as a leader in the Young Lords and tries, unsuccessfully, to sound like Malcom X.
Yazmín
52 reviews
October 8, 2016
Although interesting, poorly written. However, the story within needs to be shared.

Katie Brennan
89 reviews11 followers
July 31, 2015
Poorly-written memoir but good introduction to the Young Lords and valuable as a primary source.
Displaying 1 - 15 of 15 reviews