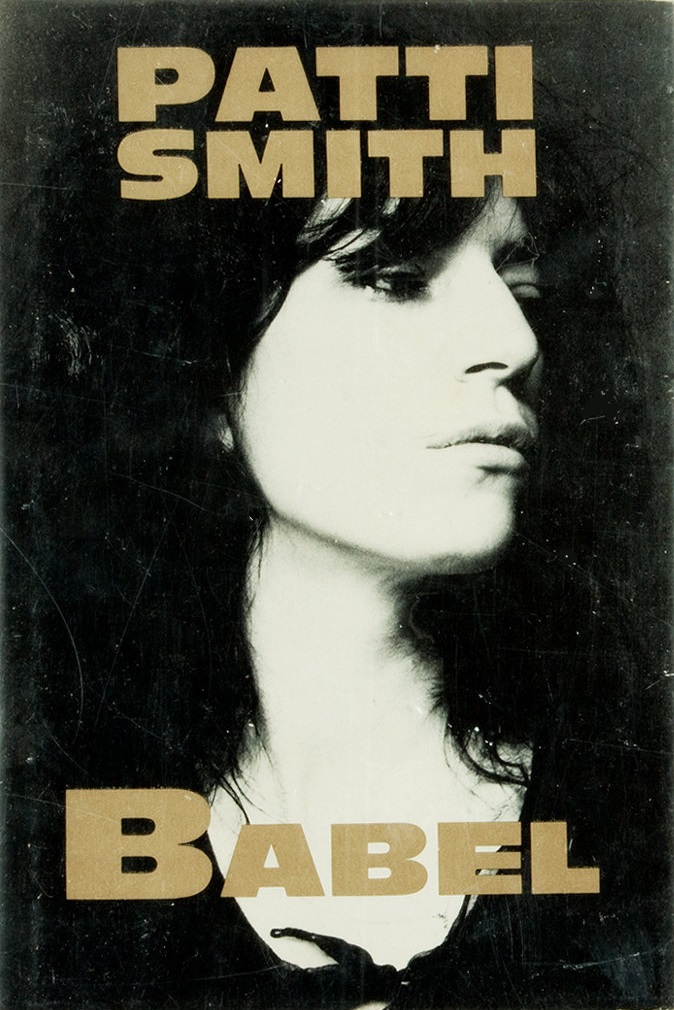 116 books9,877 followers
PATTI SMITH is a writer, performer, and visual artist. She gained recognition in the 1970s for her revolutionary merging of poetry and rock. She has released twelve albums, including Horses, which has been hailed as one of the top one hundred albums of all time by Rolling Stone.

Smith had her first exhibit of drawings at the Gotham Book Mart in 1973 and has been represented by the Robert Miller Gallery since 1978. Her books include Just Kids, winner of the National Book Award in 2010, Wītt, Babel, Woolgathering, The Coral Sea, and Auguries of Innocence.

In 2005, the French Ministry of Culture awarded Smith the title of Commandeur des Arts et des Lettres, the highest honor given to an artist by the French Republic. She was inducted into the Rock and Roll Hall of Fame in 2007.

Smith married the musician Fred Sonic Smith in Detroit in 1980. They had a son, Jackson, and a daughter, Jesse. Smith resides in New York City.

Recently I picked Babel up again and began to appreciate her work in the written form. I was unsatisfied initially by the way her words laid lifelessly on the pages, but this could not be further from the truth. My younger self simply could not appreciate Smith's written verse as my younger self had fallen head over tail in love with Smith performing these works on the stage.

While yes, Smith would dazzle with the electrically charged words performed on stage she accomplishes the same feat here! Her unconventional presentation (consisting of lower-case titles in bold with sub-titles italicized and block paragraphs tied together with odd punctuation) strike the reader hard and fast; characterizing her words with this fantastic feeling of triumph and raw power. This collection is a triumph. The words that comprise her works are alive. One need only learn to read it in such a way

She dedicated this book to the future, I wonder if the future let her down.
Creolecat
233 reviews50 followers
February 25, 2020
I remember seeing Patti Smith in person at the Licorice Pizza record store with my high school boyfriend and then seeing the Patti Smith Group at the Hollywood Palladium. Such great memories and this is an amazing read from a gifted poet.

Perry Whitford
1,956 reviews56 followers
March 27, 2020
Short poetic works about friends and freedom from the high poetess of punk Patti Smith, highly indebted to William Burroughs in both style and content, only without the buggery.

Plenty of energy and spirit, but ultimately a collection of sounds and furies signifying nothing much without the additional benefit of the band.

Well, she did call it 'Babel'.
Marissa
288 reviews58 followers
October 10, 2008
I checked out this book because lately I've been really obsessed with Patti Smith. It's practically cliche to say so at this point, but her music really does capture a certain NYC feeling in a way nobody else does. And of course, her lyrics are often really great. Lately, I've been really into the lyrics of her song, "Piss Factory," which was originally a poem and one of the first she read after she moved here. It's really long so I won't post it here and it definitely has a lot of flaws in it, vague classism and sexism not the least of them, but it's nice as a kind of raw, teenage soliloquy and it has a great rhythm to the language. There really isn't the same energy and easy imagery in most of the poems in Babel and it's hard to read the words on the page without thinking how much better it would be to hear her say them. The quality of her voice is very important to the emotions and tone of her songs and without it her poems read a little flat.

Maureen
726 reviews85 followers
September 29, 2008
This is a kooky book of poetry by Patti Lee Smith, embellished with family photos, drawings, and at least one Robert Mapplethorpe picture that I think I recognize. Stream of consciousness is probably the best way to describe most of her poetry. This book is of interest to fans of her music, particularly because of the many references to ideas that became song lyrics. I don't think everything she does is art, and sometimes I lose patience with her, but I admire Smith for her unabashed enthusiasm and willingness to let it all hang out.

Jennifer
65 reviews
June 20, 2010
Patti Smith is a true American artist and though her poetry tends to be more like an American Rimbaud, crude, poignant, and funny, she is not for everyone. The godmother of punk she is now in her 60's and still remains articulate and true to her artform.
Ellen
24 reviews3 followers
August 13, 2010
favorite book of poetry.
Jayne Ryder
Author 1 book4 followers
March 14, 2012
The language of the ecstatic - she's iconoclastic and never afraid of her own emotions - had this book for years and still love it! Must get a copy of Just Kids

*i would prefer for her to not have used racial slurs
Kyle Bolan
25 reviews1 follower
February 16, 2020
I can't recommend her writing or music enough.
Peter
36 reviews
May 8, 2022
not sure i understood it at all
Bradley Morgan
Author 1 book10 followers
December 13, 2015
Published only as a first edition in 1978, "Babel" is a collection of poetry, prose, and stream of consciousness writing. With inspiration drawn from Rimbaud and the Beats, Smith paints a unique portrait of late 70s New York City.

Rock music, sex, and Smith's life are graphically and beautifully illustrated. Smith's first album "Horses" was just three years earlier. Some of the writing in this book later appeared as spoken word monologues on her albums including "Babelogue" which appears on her 1978 release "Easter."

Smith is undeniably the Godmother of Punk. While this book truly encapsulates the essence of her life and struggles in New York during the 70s, it isn't a very polished collection. With lowercase text, misspelled words, and improper punctuation, the writing can be challenging at times. However, perhaps that's the point. What could be more punk in the literary world than defying all literature's conventions?

Dan
995 reviews96 followers
July 10, 2022
Be not afeard; the isle is full of noises,
Sounds, and sweet airs, that give delight and hurt not.(not hurt)
Sometimes a thousand twangling instruments
Will hum about mine ears; and sometime voices
That, if I then had waked after long sleep,
Will make me sleep again; and then in dreaming,
The clouds methought would open, and show riches
Ready to drop upon me, that when I waked
I cried to dream again.

Jim
254 reviews13 followers
December 16, 2008
Read this book when it came out. I carried this around with me all the time it seems. I remember it being beautiful, magical prose/poetry. I was a huge patti fan at the time, and have still not totally deserted her music. horses is brilliant rock overflowing with poetic entergy, which overflows into this, book. I really should get this off the shelf and re-read it to see if it holds up.
Jessie McMains
Author 14 books39 followers
April 13, 2020
This is the first time I’ve read this book all the way through in nearly two decades, and I’m bummed that it didn’t stand the test of time for me. There are still some beautiful lines and it was still formative enough for me that I’m keeping it on my favorites list—but I’m taking my rating from five stars down to three because a lot of the poems/pieces in it are cringey or clumsy to me now.

Gusmenary
23 reviews1 follower
November 18, 2008
There's something strangely magical and wreckless about Patti Smith's writings. An eclectic grouping of phrases and themes from space to a kind of sandherin/arabia/morroco type feel- with the brazen indecency of her music. It's lyrical, beautiful and sad. I highly reccomend it.
Daniel Iván
21 reviews9 followers
November 2, 2014
Not sure I had the best translation available, but I got to say the neo kid adventures and the general sense of experimentation on this book just got me. I truly dig how many moments and voices from the late 60's and the early 70's are present on Babel. Exciting poetry, images, art.

Stay Fetters
2,013 reviews117 followers
May 12, 2015
Patti Smith is a punk rock goddess and an idol of all girls wanting to be a badass.
She opens up a piece of my brain and heart that I didn't know existed. Like hitting a brick wall of realness.
She makes me love in an entire new way.
marie monroe
62 reviews5 followers
February 16, 2008
nice. especially nice if you like her music. the images are a little punk-dated now perhaps, but fun.
Jamie Ruiz
20 reviews
March 19, 2008
Wicked!
Dana Jerman
Author 7 books42 followers
January 17, 2010
P is a wordplay artist. This doesn't come across so much in her music. There's only enough room(s) for art every place.
Dave Naz
Author 13 books21 followers
August 30, 2011
I've always loved this book. Got me through some tough times.