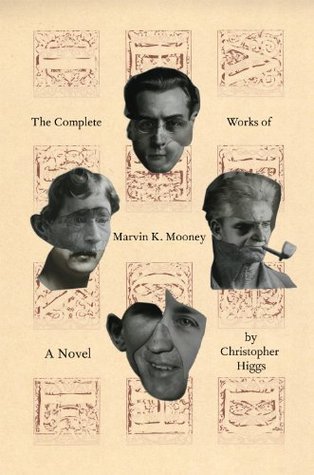 4.27
55 ratings10 reviews
Rate this book
Marvin K. Mooney, the enigmatic philosopher, has gone missing. Vanished. But we're left with his work—rambling, encyclopedic, destructive texts that call into question Marvin's own identity. Who is Marvin K. Mooney? And what has Christopher Higgs done with him? Only you, as reader, can find out.

8 books20 followers
Author of THE COMPLETE WORKS OF MARVIN K. MOONEY, AS I STAND LIVING, BECOMING MONSTER, and assembler of ONE.

Novel (no)
Story (no)
Collection of alphabetical symbols (maybe)
Meta-fiction
or
Post-fiction
or
Non-fiction fiction?

And I still don't know where Marvin K. Mooney is. (He's so far out that he's no longer in left field; instead he's probably lurking & smoking on a street corner far away.)

Peter Tieryas
Author 24 books685 followers
September 15, 2013
Some of my thoughts on the book:

"...it caused me to question and question some more and wonder about my own approach to writing and the arts."

http://tieryas.wordpress.com/2013/09/...
M- S__
278 reviews10 followers
April 24, 2017
This was ambitious and occasionally really interesting, but it's just too much, man. Higgs is so paranoid you're going to dismiss the book as not really a book that you eventually just end up dismissing the book as not really a book. It's just a little too tedious with not enough payoff. I might come back to it again though. I think if you're in the right mood and know what you're expecting, it might be a much livelier read.
Matt
250 reviews91 followers
March 18, 2013
p. 321:

"Hey, what's that you're reading?"

You could answer a number of things, one of them being: "It is a new work of creative nonfiction by Marvin K. Mooney."

In a follow-up, you may be asked:

To which you can safely reply: "It is a text about itself. It is pretentious, egomaniacal, megalomaniacal, and hardly worth my time; but for some reason I continue to read it - perhaps I am being forced to at gunpoint, perhaps I am slightly enjoying it."

And to that I would add that it's a work that is constantly defending its right to exist, which gets a bit tedious, honestly. I don't argue its right to exist, though I do argue it labeling itself a "novel." A collage of fictions and creative non-fictions and essays and quotations might be more apt. There were moments when I thought its self-awareness was clever and I wanted to love it but I just didn't.

Leonard McCullen
33 reviews
November 15, 2020
A book whose front and back covers tell you nothing.
Whose First page tells even less.
No entrance, no exit.
Reader hostile if you are unimaginative and start at the first sentence and end on the final period.
The only clue: running a thumb along the edge to riff through it like a picture book, you see no consistent structure and plenty of textual tricks. That you have to look within to find what is usually on the face, is one of this books many layers. (Although this word is all wrong, as ‘layers’ implies form or sequence)

Read the first few pages. If you are familiar with the names he drops (no, carefully places) pull it off the shelf/ click buy, you will love it.

Coover’s Hypertext without the computer.

Higgs goes farther than any other postmodern writer and makes anyone who betrays even the slightest wiff or smidge of structure in their work, look a coward.

Pretentious and obnoxious when it needs to be, important and beautiful when it wants to be.

Nothing like it In the once sunny, now setting, land of literature.

A brilliant light on the edge of the Nightlands.

I’ve read every word on every page of this ‘book’ but I do not consider it ‘finished’ or ‘completed’.
No not for some time.

How come it always seems like the books about nothing contain everything?
Bobby Dixon
14 reviews3 followers
December 12, 2011
I do not know how to articulate my enjoyment of this book. It's a book that begins before the title page, whatever that means. Or it begins on the title page, maybe. It kind of doesn't matter, it is still fun though.

It's technically a book w/ words, but sometimes there are images, and some times there is a page w/ a single word on it. Example, chapter seven, The Eight Word Essay:


Random paragraph that I will pick after I open up the book and blindly point to a page:

1983. A brittle kind of foreshadow. (7) President Reagan calls the Soviet Union "and evil empire," and also declares that this is "The Year of the Bible." Ghandi wins Oscar for the Best Picture, and M*A*S*H ends after 11 years and 251 episodes. Sally ride becomes the first woman in space. Pop John Paul II visits would-be assassin in prison to forgive him. Mother stops eating and quits her job saving animals.

(7) The year Tennessee Williams choked on a bottle cap and died in his hotel room.
p. 229
Ben
6 reviews
August 2, 2010
If the broad description of the book is intriguing to you, then you will probably enjoy the journey that is this book. If not, then it is probably not likely to be an enjoyable read for you.

The experience of this book is extremely different. It is more work and more involved for the reader and yet it is more readable in that you don't have to follow a plot and characters through a typical narrative arc. I enjoyed it immensely.

I also listened to the audiobook and found it to be intriguing in its own way. The background noise and music largely helped but there were a few spots (where a computer or simulated voice did the reading and where the reader read along with the computer voice) that were an incredibly challenging listen.
Genna
771 reviews5 followers
July 28, 2012
This book was so odd, I don't really know WHAT to say about it, but I guess that was the point. That IS generally the point of meta-fiction, isn't it?