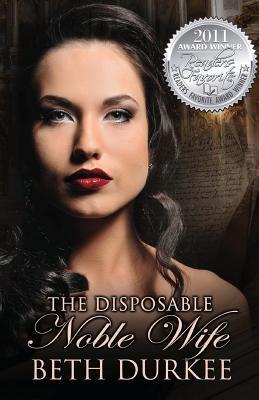 4.06
17 ratings4 reviews
Rate this book
2011 Reader's Favorite Silver Medal Winner! The Disposable Noble Wife is a compelling mix of fact and fiction. The author weaves her tale around a fictional character using factual statistics, bible passages and genuine journal entries to relay the story of a betrayed wife and her struggle to salvage her marriage and family. On a deeper level, the book is much more than what it outwardly appears. The spiritually trained eye can see it is also a strong example of mankind's natural bent to reject UNCONDITIONAL LOVE in favor of carnal desire, his self-interested disobedience to divine command and stubbornness his ultimate undoing. Not for the faint of heart, this heartwrenching story is a tale of love in its truest form.

14 books13 followers
Beth Durkee is an American author and inspirational personality. She specializes in short reads for the Christian market that bring awareness to God’s quiet callings and His whispered presence in our daily lives. Her message is that life is often hard, but God is with us through it all and her books have warmed the hearts of readers worldwide.

The Disposable Noble Wife is a compelling mix of fact and fiction. Based upon true events, the author weaves a fictional tale around factual statistics and bible passages to relay the story of a betrayed wife and her struggle to salvage her marriage and family.

This heartbreaking story is a tale of love in its truest form and ends where only love would be able.

I was drawn to this book by the title and description. I wanted to see how fact and fiction could be merged together into a story. It was a little confusing to read because there was a constant shift between the author's third person narrative, the subject recounting her experience, and reading of the subject's journal. Had I not read so much of it thru my Kindle's text-to-speech feature, it may have been a little more seamless.

Be that as it may, I was intrigued by both Faith (an ironic name for this character), the spurned wife of 15 years, and Les, her philandering husband who, obviously in the throes of a midlife crisis, believes he is in love with another woman.

From the first few pages of the book, Les's actions screamed infidelity, and I was so mad at Faith for being so stupid as to not see them. From going into work at his office job at 3:30 a.m. to forgetting to pick up their daughter from her activities, Les is waving red flags all over the place. And Faith, who is truly blindly in love with her husband, takes his lies at face value. It isn't until he tells her he isn't in love with her any more that she realizes something is wrong with their marriage.

Crushed by the thought of her husband having another woman on the side, Faith returns to the Catholic roots she had grown up with but abandoned during her marriage. She believes, naively some would say, that faith and prayer will bring her husband back to her. While I'm a Christian myself, I would have been praying for strength to get through the ordeal--and maybe to not murder my husband in his sleep--not praying to bring the lying, cheating, SOB back to me. But Faith believes her marriage vows are a sacred covenant with God, and to break them meant damnation to Hell.

My heart went out to Faith through the whole book as Les gets more and more ugly with her. And all the while she's treating him like the loving wife she has been for 15 years. It isn't until Les's actions make Faith fear for her and their daughter's safety that her views begin to change. But even then, she's convinced the marriage can be saved.

I wondered, while reading, if it was truly Faith's deep love for her husband or was it the fear of losing her salvation that kept Faith so motivated to save her marriage. Because, honestly, why keep throwing yourself at someone who clearly doesn't want you?

The ending of the book, however, was a hugely disappointing anticlimax for me. I won't spoil it for potential readers by giving away details here, but it just seemed to me like the story was abruptly cut off and I was left with a big WTH?. Even with that, the book was an interesting change of pace to me.

SorcheMaryClare Hyland
1 review
January 16, 2010
This Author is Totally Amazing, to be honest with you all I'm so honoured and Humbled to actually have her as a Close Friend In My Life let alone in March to finally meet Her in The U.S. and to see her book, to have my own copy signed but I am also so thrilled to be rating this and to be the first of many.

it is a book that is so wrote with Love, in everyway possible even in her Heartache, Heartbreak, Pain and Stuggles as well aswell as Her Inner Strength, Love, Joy, and Happinness and Vitality to Teach Others in their Lifes situations, to keep going, to never give up, that its okay to go through the storm,

I Must say it is a Precious book that was ever written for todays world of so many seperations and divorse and situations Faced in married life, Problems that maybe worked out together hand in hand yourself and youre spouse or like beth sometimes alone and in the company and support of close Family Friends. so i would have to say that This book portrays priceless Gifts of Friendship, blessings, from above,an undying and Never ending Love For Her Marriage, Her Spouse and Family that could only ever be The Greatest Dreams that one could ever wish to have in this Life.

Dearest Beth i wish you every success in Enjoying Youre book being Published and Enjoying the Famous Life lol. it's a tripple best Seller and will for sure earn you Awards as an Author so I hope to see you at The Awards ceremonies. I'm so proud of You!!!! You wouldnt believe just how much!!!!! Lots of Love As Always Sorche x x x
Vicky Patterson
21 reviews
July 8, 2013
This book was apparently written as a combination of fact and fiction. At times it came off like a nonfiction treatise on adultery. This is apparent as the writer explained the husband's feelings in answer to the wife's questions, cited scripture references, and had chapter notes with statistics and signs of infidelity.

Characters came and went without being developed. It was as if the reader should know who they were.

I am a Christian and an avid reader of many genres. This book felt as if it was meant to be used by the Catholic in counseling sessions for couples with infidelity issues.

One reviewer on Amazon said this book read like a first draft. I agree. The writer needs to decide if this book is fact or fiction and determine the target audience.

I read this book because I saw a wide variety of reviews and wanted to find out why. After reading this book, I can't understand why anyone would give it a high rating.
Displaying 1 - 4 of 4 reviews