Goodreads helps you keep track of books you want to read.
Start by marking “Awakening the Spine” as Want to Read: 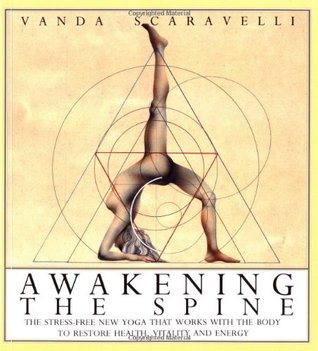 We’d love your help. Let us know what’s wrong with this preview of Awakening the Spine by Vanda Scaravelli.

by
Vanda Scaravelli
4.24  ·  Rating details ·  330 ratings  ·  32 reviews
A revolutionary new method of yoga for overall fitness that teaches "if it hurts, it's wrong'"--from a vibrant 83-year-old master.

To ask other readers questions about Awakening the Spine, please sign up.

Be the first to ask a question about Awakening the Spine

Start your review of Awakening the Spine

Apr 13, 2011 Mag rated it liked it
Shelves: yoga
Beautifully illustrated, but not so well written (or is it the translation that's ailing?), it was interesting, but not life changing. Interesting since Scaravelli, just like me, discovered yoga later in her life- in her late forties. Taught by Iyengar and Desikachar, she went on to establish her own yoga school based on her ideas regarding breath, gravity and the spine. She voices her theories in the book. She became quite well known and regarded before dying 50 years later in her nineties.
View all 3 comments

Apr 23, 2018 Erica rated it really liked it
Shelves: z2018-reading-goal, health-and-fitness
This is not a book to read in order to learn yoga. Rather, it gives a depth of understanding to an existing yoga practice. Beautiful.

Dec 27, 2018 Judy Lindow rated it really liked it
Awakening the Spine is sort of an odd book. It looks like an easy read, there are a lot of pictures, but there are some points she makes about yoga and our bodies that I've never read about before. The most fascinating to me is the significance she places on the lower back, a point where the body extends upwards and downwards at the same time as a result of gravity - a sort of magical junction.

For example, in this analogy that compares a tree to a body she writes, "This central point of the Awakening the Spine is sort of an odd book. It looks like an easy read, there are a lot of pictures, but there are some points she makes about yoga and our bodies that I've never read about before. The most fascinating to me is the significance she places on the lower back, a point where the body extends upwards and downwards at the same time as a result of gravity - a sort of magical junction.

For example, in this analogy that compares a tree to a body she writes, "This central point of the tree, where it touches the earth's surface, corresponds in our body to the waist at the level of the fifth lumbar vertebra, where the human spine moves in both directions. Goethe said that he could understand the falling of the apple (that gave Newton the idea of gravity) but he could not understand how a tree could grow in two opposite directions. This inexplicable cosmic interconnection of dynamic movements, following the law of gravity, is the same that moves the planets and holds the different worlds together.".

She writes: "We have three friends: gravity, breath, and wave (connected with the supple movement of extension along the spine). These three companions (fused in one) should be constantly with us. Her premise has perfect timing for me as I've recently become very interested in both breath and the spine - specifically the fluidity of the spine. She points out that extension and cartilage health through practice can be developed at any age.

The author expresses the importance of the spine, breathing, and practice. She talks about spine and nerve development, and our connection to the earth. Also interesting is that she writes about probable yoga practice in early Egypt - which is an insight in Shanon Gannon's (Jivamukti Yoga founder) new book.

The book was written 30 years ago which probably places her experience and education with BKS Iyengar about half a century ago. ...more

Aug 02, 2017 Shuyi Chua rated it it was amazing
A beautiful book. Wisdom captured in small readings and sections. Love the choice of accompanying images.

Apr 04, 2015 Sydney rated it really liked it
Worth reading for the images alone.

Mar 24, 2017 Rob Martin rated it it was amazing
Not your average yoga book.

Dec 08, 2007 emilie rated it it was ok
Her yogic technique is far better than her writing skills. I enjoyed the last section where she demonstrates different postures.

Sep 20, 2009 Laura rated it really liked it
Lovely collection of photos and meditations on incorporating yoga philosophy into daily life.

One catch: The language often feels awkward. I don't know why the editor didn't step in more. I suspect the weird syntax has to do with translating Italian (whether that was done by the author herself or someone else). Sometimes, reading something written by Yoda, I was feeling, yes.

Dec 26, 2015 Antony Mayfield rated it really liked it  ·  review of another edition
This is a lovely book about yoga. Not immensely practical but a must-read if you are learning Scaravelli yoga, and I'd imagine would be useful for Hatha practitioners generally.

Feb 15, 2018 Greta rated it really liked it
Shelves: general-non-fiction
This book gives the usual yoga instruction a new twist. Inspirational and uplifting, it encourages the gentle movement of the body to align not only one's spine but also oneself in the greater scheme of things. Lovely photos and role model in the supple bendiness of the 83-year-old author herself.

Aug 21, 2018 Leon Hermanson rated it it was ok  ·  review of another edition
More of a scrap book than text book. Only for experienced yogis. Took a few tips from it, but my spine remains dormant...

Aug 20, 2017 Mary Karpel-Jergic rated it really liked it  ·  review of another edition
Shelves: lifestyle, meditation, religion-spirituality, self-help
A beautiful book of prose and pictures that provide an insight into yoga. This is not just a book of poses (in fact I'm not sure books are the best way to learn poses; much better to have an instructor to guide you) but an introduction to a new way of life and a fresh way of looking at the world. This is an updated version of a classic so has really stood the test of time. The author is/was a remarkable woman.

Apr 02, 2019 Pedro Testi rated it it was amazing  ·  review of another edition
Shelves: all-time-favourites
This is not a book about yoga positions ( asanas ), although you will find some photos and comments regarding certain postures.
Every page contains in simple paragraphs and photographs on concepts of being, finding peace, breathing and existing in peace in a chaotic world.

Jun 02, 2008 Laura rated it it was amazing
This book is so much more than what it sounds like from the title. It is full of wisdom, inspiration and beautiful photographs.

Sep 24, 2015 Ryan Dixon rated it it was amazing
A key book for me, to back me up with Yoga practice and Yoga teaching.

Jul 23, 2011 Marianne Meyers rated it really liked it
Beautiful, beautiful book. So knowledgeable, so simple, so clear, so loving. Seeing the photos of Vanda in asana are inspiring at her advanced age.

Nov 11, 2012 Francesca rated it liked it
I did not find this book very "awakening" even if my knowledge of yoga is pretty basic... And kinda still is.
I guess I was looking for and needing something different, but that's me.

Some insane poses, though -- maybe something for after-nine-years of Yoga.

Aug 28, 2018 Robin rated it it was amazing  ·  review of another edition
Lovely stories and wisdom and photos

Feb 04, 2015 sendann rated it it was amazing
Much highlighting in here, a delight and a lesson for movers of any persuasion.

Feb 19, 2015 Leanne Ford rated it it was amazing
just lovely. and useful too!

Scaravelli was a concert standard pianist herself and maintained her involvement in music throughout her life.

She married Luigi Scaravelli, a Professor of Philosophy at the Universities of Rome and Pisa with whom she had two children. Luigi Scaravelli died suddenly shortly after WW2. Around this time she was introduced to BKS Iyengar by the violinist Yehudi Menuhin in Gstaad, Switzerland. Iyengar taught daily classes to Krishnamurti, whom Scaravelli had known earlier in life through her father. Thus she took up yoga late in life.

Some years later Krishnamurti invited Desikachar to the Scaravelli's Chalet Tannegg in Gstaad, where he taught them about the importance of the breath or pranayama, which became one of the principle themes in Scaravelli's teaching. After this Scaravelli continued to study with Iyengar and Desikachar for some years as she was developing her ideas surrounding the breath, gravity and the spine.

When Scaravelli's husband died suddenly after World War II, she soon began spending summers with her children at a chalet in Switzerland, where she hosted Krishnamurti during his lectures there. B. K. S. Iyengar would come every morning to teach him yoga; he introduced Scaravelli, then in her 40s, to the ancient discipline, and "a new life came into my body." Thus began her ongoing exploration of what she called allegrezza, "the intelligent heart."

From T. K. V. Desikachar she learned breath awareness; she later formulated her own approach to yoga (in which "you become intelligent and at the same time you are happy") and began to teach others. Her book Awakening the Spine (Harper San Francisco, 1995) became a classic. Since her death in 1999, at age 91, several teachers have carried on her work, most notably Toronto-based Esther Myers. "I practice because it is natural for me to practice," she told Myers in a 1996 YJ interview. "There is no other reason. " ...more

Trivia About Awakening the Spine

Quotes from Awakening the Spine

“To relax is not to collapse, but simply to undo tension.”
“Movement is the song of the body.”
More quotes…