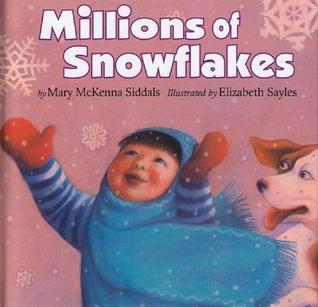 3.71
168 ratings32 reviews
Rate this book
"One little snowflake falls on my nose. It makes me shiver from my head to my toes." A little girl plays outside on a cold winter day, counting each snowflake as it falls softly to the ground. Bundled in her warmest snowsuit, she savors the snow, tasting each flake as it falls on her tongue, and makes snow angels. Simple rhyming text captures the joy of a winter afternoon while teaching basic counting skills. Exuberant pastel illustrations invite young readers to join the fun.

Ages 2-3. As in Tell Me a Season (1997), Siddals has written a book for preschoolers with minimal, but descriptive text--a kind of playful poem about the natural world. This one, which rhymes, is about anticipating a snowfall, and all the great things a child can do in the snow, such as catching snowflakes and making snow angels. Sayles uses a cool palette of pinks, blues, and lavenders. Her pastel paintings begin small, floating in white space ("one little snowflake falls on my nose"), but the pictures grow with each spread as the snow fall becomes heavier--" millions of snowflakes in my hair" --until they finally fill the page. It's as if she zoomed in on one snowflake and then pulled back, expanding the field of view to reveal the complete scene of a little girl frolicking with her dog. This is a book, like Uri Shulevitz's, Snow (1998) or Ulli Steltzer's black-and-white photo essay Building an Igloo (1995), that will get an enthusiastic reaction from active young children.

In this small-format counting book, a girl counts falling snowflakes from one to five. The brief rhyming text captures the simple pleasure of cavorting in newly fallen snow, as do the lavender and blue pastel illustrations, which start off as small squares surrounded by white and grow in size as the numbers increase.

Siddals (Tell Me a Season, 1997) again looks to nature for inspiration in her tale of seasonal delight. This simple counting story celebrates a child's wonderment at the marvel of a snowfall. "Two little snowflakes get in my eyes./Blink! Blink! What a surprise!" Beginning with one lone flake falling on a child's nose, the gentle verse explores the various destinations of one, two, and more snowflakes, from nose to tongue, chin, and hand. "Millions of snowflakes in my hair./Snowflakes falling everywhere!" Moving from the first depiction of a solitary snowflake and gradually enlarging the focus to encompass the final full-page blizzard, Sayles's pastel illustrations deftly capture the essence of a child's pleasure in snow. Using delicate hues and softly drawn images, she recreates the quietude of a world blanketed in white. A sparkling salute to the frosty season.

PreS-A short rhyming text captures a little girl's delight as she romps with her dog in a wintry landscape. The heavily bundled youngster counts, touches, and tastes the snowflakes as they fall around her. Linda Brennan's Flannel Kisses and Lezlie Evans's Snow Dance (1997, both Houghton) both welcome winter in rhyme; their longer texts and larger formats lend themselves better to group sharing than Millions of Snowflakes. However, Siddals's book is perfect for small hands, and Sayles's evocative illustrations in pastels create winter surroundings made for playful exploration.-Kathy Piehl, Mankato State University, MN
This entire review has been hidden because of spoilers.

Chryssi
10 reviews
February 1, 2016
This is a great book to read aloud to younger children (babies and toddlers) because there are not many words on each page. It covers the concept of counting and exposes children to the early literacy skill of phonological awareness through rhyming. This short book effectively expresses the experience of the joy children find in the simplest things, such as snow falling in wintertime. It has wonderful illustrations and a nice flow with the numbers and rhyming. This is a delight to read as the seasons change. It is a very sweet book - beautiful in its simplicity.

I love this and the one little toddler that came out for lap time on our coldest day did too. 1/7/14

Used again for my Lap Time program and it was my favorite and went over well. Maybe 4.5

RC
273 reviews18 followers
February 6, 2015
This sweet, winter counting book is a perfect companion to a snowy day. With gentle illustrations and simple words, this is a great book to share with an child or early reader. The muted colors and short prose all echo the quiet scene that the book lays out. It is a simple, sweet story-perfect for a snowy day.

I would wish that Meimei, and all the little girls and boy who live here in Vegas, could experience the pure joy and wonder of a snowfall the way this little girl and her faithful dog do!
Sherry Thornberry
206 reviews9 followers
February 3, 2015
This book about snowflakes has wonderful; illustrations and captures the true feeling of being in a gentle snow. The pictures make it easy to decipher the text. This book also demonstrates counting to five.

Miss Pippi the Librarian
2,367 reviews53 followers
March 11, 2020
*This book is a not counting to a million. There is one phrase at the end the references a million snowflakes.*

A little one is exploring snowflakes and counts to five. This paired well with snowflakes on the flannel board.

Reviewed from a library copy.

Jami
487 reviews7 followers
June 9, 2008
The shortest bedtime story I've ever read. My daughters and I just looked at each other when it ended. "Read it again." she said. It was two minutes well spent overall I'd say.
Sherry
466 reviews
February 12, 2009
Fun and sweet beginning reader!
Kit
405 reviews
December 6, 2009
Cute counting book.

Crystal
2,187 reviews112 followers
December 14, 2012
This was perfect with the pre-k class. They were able to anticipate some of the rhyming words and help count the snowflakes.

Polly
3,165 reviews44 followers
January 27, 2013
A cute winter story for storytime. We used it all the time when I was doing team-storytime for giant groups in Washington.

Sydney McClure
205 reviews
January 31, 2013
This is a good book for younger grades. It helps with counting and seasons. Inferencing can be taught as well, which I saw in my kindergarten classroom today.

I wish that everyone could experience, the pure joy and wonder of a snowfall, the way this little girl and her faithful dog do!

Eric
440 reviews10 followers
December 14, 2014
Another great read aloud,adapted into braille for the blind.

Alison
43 reviews21 followers
January 19, 2019
This is such a gentle book! Gorgeous, soft illustrations. Works really well with preschoolers and toddlers in a circle time.

Stacia Leigh
Author 5 books40 followers
Read
December 30, 2020
Read the ebook version in my browser and was truly disappointed. Illustrations and text were duplicated and jumbled, making for a poor reading experience.

Meghan Hunt
619 reviews
November 14, 2013
This is a cute counting book of snowflakes falling one by one until there is five. I love that there is an action after each one. The book is quite small, but I hope to use it for a smaller group during a storytime on snow. I like the fact that I can get the audience to join in on the actions along with the story. It can be very interactive.

Pinky
6,424 reviews13 followers
January 7, 2022
On a snowy day, millions of snowflakes fall around an awestruck child.
This entire review has been hidden because of spoilers.

Aaliyah
156 reviews
February 5, 2014
We really loved this book! Very fun!
Laura
50 reviews
February 20, 2015
My son thinks the kid in the illustrations is him. Too cute.
Kim Bogren Owen
Author 3 books7 followers
January 23, 2016
This almost wordless counting book is perfect for the youngest child and celebrates the delight children feel when playing in the snow. Enjoy before you revel in your own snowy play with your child!
Displaying 1 - 30 of 32 reviews
More reviews and ratings