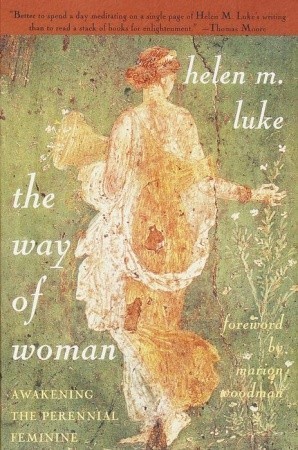 The Way of Woman: Awakening the Perennial Feminine

4.19
74 ratings4 reviews
Rate this book
Helen M. Luke speaks with the power of a true sage on the issues of community, relationships, the women's movement, marriage and divorce, and mothering. Profound, graceful, and transforming, The Way of Woman is a true celebration of feminine worth.

"In this book, Helen Luke has rendered her lifetimes' worth of understandings about the unique nature of the feminine psyche. The spirit of the work is to be treasured especially because it is informed by her ninety years of inimitable life."
--Clarissa Pinkola Estes, Ph.D., author of Women Who Run with the Wolves and The Gift of Story

"For many years I've learned from the experiments and reflections of Helen Luke, one of the few authors inspired by Jung who leaves a strong individual contribution to a spiritually rich psychology. She was able to find a unique way through the polarities that get us all stuck: theory and personal insight, gender and a point beyond gender, psychology and spirituality, tradition and immediate perception, knowledge and wisdom. Better tos pend a day meditating on a single page of her writing than to read a stack of books for enlightenment."
--Thomas Moore, author of Care of the Soul, Soul Mates, and Meditations

"In the Book of Proverbs it is written: 'Say to wisdom, you are my sister, and call insight your intimate friend.' Helen M. Luke was such a sister and such a friend. In The Way of Woman one is honored to be in the presence of a true Wise Woman."
--Jonathan Cott, author of Isis and Osiris, The Search for Omm Sety, and Pipers at the Gates of Dawn

"Helen Luke can strike one note with one finger with such sensitivity that is resonates forever in our soul... On behalf of countless women and men, I say, 'Thank you, Helen. Thank you for guiding me to the courage of my own feminine depths. Thank you for strengthening me in finding my feminine voice. Thank you for steadfastly living the feminine values in a society that, consciously and unconsciously, despises them. Thank you for encouraging me to go where I might never have dared go alone. And thank you for shining the light into corridors where I have yet to go."
--Marion Woodman, author of Leaving My Father's House, from her foreword

4.19
74 ratings4 reviews
5 stars
37 (50%)
4 stars
20 (27%)
3 stars
12 (16%)
2 stars
4 (5%)
1 star
1 (1%)
Displaying 1 - 4 of 4 reviews
Veronica Ibarra
57 reviews8 followers
February 25, 2014
This is another of those books that I acquired many years ago and am only now getting around to reading, and like others for me it was timed quite well without my intending it so. Having studied psychology and trying to be aware of how my own experiences have shaped me, owning the choices I have made in my life and all those I will make, I find that reading Luke's words helps me with that internal understanding. There were moments when I balked, but upon reflection I see her meaning.

I consider myself a feminist in that I do believe in the equal value of women and men in society, and that no one should be barred from opportunities based solely on gender. However, it has never sat well with me the negative connotations that label has accrued, which Luke talks of with candor and insight. I continue to wrestle with what it means for me to be a feminist, and Luke lays out quite well this struggle. Her words give me more to think about, which is the most profound thing any writer can do.

Lisa M.
304 reviews6 followers
January 2, 2016
I love reading so much. It's so hard not to buy every book I see! When I go to the used bookstore I often frequent, there are several books I want but I know I probably won't like. They are often on topics I'm interested in for whatever reason I don't think the author will handle them in a way I agree with. This was one of those books. But, on every birthday, I go to the store and splurge - so this year I bought this book! I finally read it.

I am not sure if this book is for me. I am not even sure where to start writing about it!

First, the text was very dry. It was difficult to stay invested - my mind often wondered while reading this. The major points she makes could be gleaned from two interviews with her that were previously published in magazines that are about 30 pages. While dry, the text was still thought provoking and perhaps worth a read.

Otherwise, it was not what I expected to be about (but can you fault a book for that?) This book takes a controversial stance on gender roles and feminism. It argues that feminism, in a way, has killed traditional female values. Women, while resenting men, also resent traditional feminine characteristics because they were forced on them in the past. Luke argues that women and men should have the same opportunities to do what they want in life - but that they should approach them differently, spiritually. (I.E., men having the need to individuate, women the need to relate.) This isn't new, other thinkers have definitely thought it before. But it is controversial and thought provoking. I'm not sure I agree, but it gave me a lot to think about. Luke applies this thinking by analyzing different stages of life, cultural symbols, and deities and characters from myths and books.

Apparently, this book is a selection of essays across Helen's career - this was the last book published after she died. I am not sure if they do this with all of her books, but it's clear some of the essays could be read in other publications of hers - so beware.

Meghan
122 reviews
June 14, 2017
Amazing collection of essays. Felt that she was deftly explaining many of the internal struggles of my own life. Every few paragraphs had something profound for me, and there are quite a few post it notes throughout. I will definitely be re-reading sections of this book in times of difficulty. Loved the analysis of the story of Oural; very relatable. The whole book was relatable. I want to send it to all the women I know, especially those going through a rough patch. I felt very connected to Helen's words. Did have to re-read at times to fully understand, but that usually means it's worth understanding. Highly recommend, and not only to women. Makes me want to read one on masculinity now. I love this subject.
Elizabeth
2,137 reviews
November 13, 2017
The Way of Woman: Awakening the Perennial Feminine (Paperback)
by Helen M. Luke
This entire review has been hidden because of spoilers.