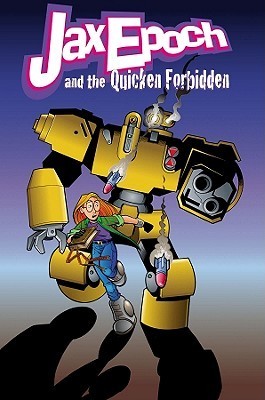 Jax Epoch and the Quicken Forbidden #1

3.44
34 ratings5 reviews
Rate this book
Disappointed with the life around her, teenager Jacqueline "Jax" Epoch, accidentally winds up falling through the Realmsend, a passageway into a different dimension. Expecting a lush, fantasy world, she instead finds a barren plain, devoid of the magic she's dreamed of. When she returns home she finds that everything that was magic in the other realm has leaked into her own, causing her reality to fall apart. Dragons fly over the streets of Manhattan marshmallows talk back, snow falls in July and her boyfriend dumps her. Worst of all, Jax is put on trial for bringing about the end of the world with only a robot lawyer to defend her.

42 books117 followers
Dave Roman is the author of several graphic novels including Astronaut Academy: Zero Gravity, Teen Boat!, Jax Epoch, and Agnes Quill: An Anthology of Mystery. He has contributed stories to Explorer: The Mystery Boxes, Nursery Rhyme Comics, and is the co-author of two New York Times bestselling graphic novels, X-Men: Misfits and The Last Airbender: Zuko’s Story. Roman is a graduate of the School of Visual Arts and worked as a comics editor for the groundbreaking Nickelodeon Magazine from 1998 to 2009. He lives in Astoria, NY with his wife, and fellow comic artist, Raina Telgemeier.

Dave has had stories in Flight volumes 3, 4, 5, & 7 (Villard) and Bizarro World (DC Comics). His website is Yaytime.com

Hillary
194 reviews16 followers
March 3, 2008
While I was underwhelmed at first with this--based on the extremely cool description, I'd thought it might be funnier, more creative, just more out there--it's growing on me, especially as the levels of violence and confusion increase. It's too early to tell yet whether this whole parallel universe device will pay off. It may end up just being a way to get out of having a more continuous narrative. The art's not what I would like, and it doesn't seem to jive with the story. I don't think that's a function of it being black and white so much as of the panels being excessively simple (not enough shading or stuff going on in the background or something). And it's all a bit 1990s, from the fashion to the occasionally gloomy outlook. But, as I went on, I realized that it may yet escape the limitations of its genre. It produces some genuinely creepy feelings when, e.g., a guy loses most of his arm. It's so unexpected and bloody, especially in a comic that seems to be aimed at middle-school- and early high school-age girls. It may come off less so without color, but still it's sort of shocking. I thought when I started that I might not read volume 2, but I will.
Ricki
1,398 reviews69 followers
January 1, 2014
This was the first compilation of the Jax Epoch and the Quicken Forbidden comics, and if this is any indication, this was a fun series...for the 90s. It is very dated, and while the artwork is enjoyable, it is also uneven at times.

Natalie
605 reviews2 followers
July 14, 2014
There was so much going on that the plot made very little sense. I was so confused.