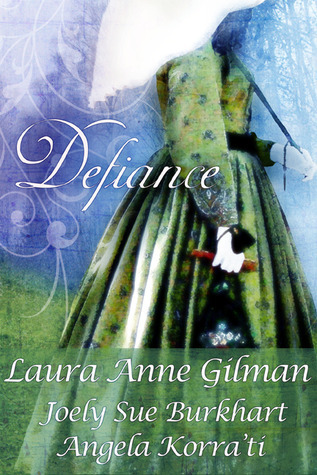 4.20
10 ratings1 review
Rate this book
Laura Anne Gilman, Joely Sue Burkhart, and Angela Korra'ti take us back to the days of the Civil War with ministering angels, magical creatures, and death. Each of the women in these stories refuses to take on the role she's been assigned by birth, race, or circumstance. Each woman demonstrates life changing defiance.

118 books782 followers
Laura Anne Gilman’s work has been hailed as “a true American myth” by NPR, and praised for her “deft plotting and first-class characters” by Publishers Weekly. She has won the Endeavor Award for THE COLD EYE, and been shortlisted for a Nebula, (another) Endeavor, and a Washington State Book Award. Her work includes the Devil’s West trilogy, the Cosa Nostradamus urban fantasy series, the Vineart trilogy, and the story collection WEST WINDS’ FOOL. Her upcoming move, UNCANNY TIMES, will be out from Saga Books in 2022.

She lives in Seattle with a cat, a dog, and many deadlines.

Davida Sandersen comes from a long line of gifted women. Gifted women who put their talents aside to be devoted wives, or were otherwise chained down by their society. Davida would rather die than suffer the same consequences. She moves from Boston to a nice secluded town where she finds her own sanctuary, even if she is sometimes called to duty by the people of the town for her Gift. Davida is a Finder, with just a few short descriptions, she can call forth impressions to find a lost item or person. Except, its never come on its own, but when the impressions come in the form of dreams that won’t bloody well give her peace the Finder realizes it is she who has lost something. She sets out for adventure to recover it and comes back with much more than she bargained for.

I really loved the poetic style Gilman used for the “impression/dream” narrative. I also appreciated Davida’s practicality in the face of adversity. Without giving away spoilers, I wasn’t sure how I felt about the ending. But having thought about it more, I’ve decided that I liked it. Davida remains true to her character, a woman who knows what she wants out of life and refuses to compromise for it, even when it may have been easier to do so. And, on another note, (something I quite liked) Gilman left her readers with enough elbow room that, if you are so inclined, you might imagine other events occurring down the road, just beyond the story book margins.

The Blood of the Land by Angela Korra’Ti

This is set in the world of Angela’s previous book “Faerie Blood”. A book I read and enjoyed. I have to say though, I actually liked this story more. For a few reasons.

Dorcas is a slave on the run, with her lover Caleb, from her former master, Josiah McCreary a man who not only lusts after her but fears her for her Power. Called a “Witch” by the white men, Dorcas is gifted with the Power to heal. She does not know where the power comes from, but she has stopped trying to rationalize it. Certainly not, however, from the white man’s Christian God whose words they twist to remove fault from their actions, while punishing the slaves for doing anything they consider blasphemous.

In their efforts to escape, they come across an injured white man, a Warder-unbeknowest to them- and his Power calls to Dorcas. When she heals him, he reveals himself to be a Slave sympathizer and takes an active part in helping their escape. It doesn’t take long for McCreary to catch on that she’s gone missing however, and the epic battle ensues. To earn her freedom with Caleb’s life in tact, Dorcas must rely on more than one white man, the Warder of a bloodied land, her own Power, and a Specter with an epic gripe.

I really really like Angela’s use of ethnic characters. And not just ‘ethnic’ characters but smart black female characters. Their not ghetto fabulous (or, in Bahamianese, “jungaless”). I’m also really happy she didn’t shy away from the slave angle, and that she made Dorcas and Caleb both strong, capable and intelligent individuals despite their tragic circumstances. I took a vast amount of glee in the final scene, the showdown for Dorcas and Caleb’s freedom, and really liked Elias Sutherland (the Warder) and his wife Jenny. Found myself oddly fascinated by the character of Harriman Tucker for reasons that I will leave you to sort for yourself. You’ll just have to buy the book!

Storms as She Walks by Joely Sue Burkhart

Thunderer, or more appropriately, Meli “Storms as She Walks”, is an Injun “squaw” in a white man’s world. Wary of government handouts and her people’s defeated mentality, Meli enlists in the US Army, hiding her curves in loose fitting wears, beading her hair, bandaging her breasts, and adopting a gruff tone to go with her guff persona “Thunderer”.

Meli’s got the courage of ten men, but if her regiment discovers her secret, her dream of earning a place for herself in the world will be for naught.

Luckily, some of the men aren’t as stupid or bigoted as she might have first guessed. Especially her partners in crime, Lying Abe and Big John. Having been abandoned by her shamed mother, Meli has never known kinship. But as any soldier can attest to, once you’ve eat, slept, toiled and bled with the best of ‘em, they become blood brothers for life. And then there’s Captain Steadman, fast becoming a complication in her already complicated life.

When Colonel Pamby, none-too-affectionately referred to as Namby Pamby, turns on Thunderer’s regiment and sets a trap for their fearless leader Captain Steadman, Thunderer must use her cunning to rally reinforcements and orchestrate a rescue mission. Captain Steadman has three rules, He’ll never ask you to do what he is not willing to do himself, never leave a man behind, and he’ll always keep his promises. Except, Thunderer’s not sure she’d just upholding her Captain’s rules so much as following her heart, and she’s disobeying the Colonel’s direct orders to do so.

Told ya she had guts.

Meli will have to fight tooth and nail to get her Captain back, bring justice to her wronged people, and to earn her happily ever after.

Um, another note about full disclosure. I have developed a (dare I presume) friendship with Joely after reading and reviewing her first novel The Rose of Shanhasson.While I understand that might make me appear biased in my gushing, I assure you my love for her work is genuine. She writes my particular brand of crack. I “get” and “dig” her work, connecting with it on a profound, emotional level. Storms As She Walks being no different.

Someone had to do it. You can’t produce an Anthology about strong defiant women in the time of the Civil War without at least one story involving a woman soldier. It would be blasphemous. Joely came through in spades, something I’ve come to expect in a Burkhart read.

This is the most Romance-oriented story out of the lot, but there is so much more too. Joely has a knack for building bonds between her characters, both romantic and platonic. What really brought this story home to me was the dynamic of Thunderer’s regiment. The military-style banter had me in stitches and the battle scenes were beautifully executed. The romance was a bit tame-for a Burkhart read, which usually scorches off the page- but not in an unsatisfying way. Sweet and fulfilling, it fit perfectly within the confines of its tale.

And I know we were supposed to dig the Captain (and I totally did), but I must say, I developed quite a soft spot for Lying Abe. Big John ranked pretty high up there too, coming third only to Meli, our gutsy heroine.

Hands down my favorite Anthology from Drollerie Press thus far. Probably the best Anthology I’ve read. Ever.
Displaying 1 of 1 review