Goodreads helps you keep track of books you want to read.
Start by marking “Damn Good Food: 157 Recipes from Hell's Kitchen” as Want to Read: 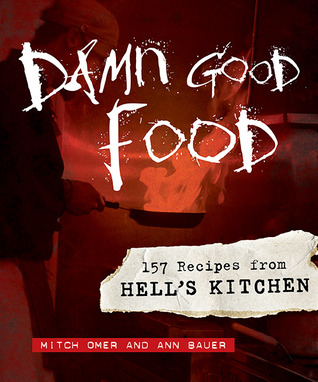 We’d love your help. Let us know what’s wrong with this preview of Damn Good Food by Mitch Omer.

by
Mitch Omer,
Ann Bauer (Goodreads Author)
4.09  ·  Rating details ·  68 ratings  ·  8 reviews
A collection of 157 recipes from Mitch Omer, chef-owner of the wildly popular Hell's Kitchen, named one of the Best Breakfasts across America by Esquire magazine.

To ask other readers questions about Damn Good Food, please sign up.

Be the first to ask a question about Damn Good Food

Aug 19, 2019 Tena Edlin rated it really liked it
Shelves: cookbook
I’m seriously turning into my mother and developing a massive cookbook addiction. I bought this one because I’m crazy about the restaurant in Minneapolis, and I was craving the Mahnomin Porridge in the worst way. It did not disappoint... the book or the recipe either one. Great stories about the man who founded Hell’s Kitchen and loads of other delicious-sounding recipes too.

Jan 26, 2015 Nicholas Aune rated it really liked it
I don't know, maybe it's a phase or maybe it's the cause of too much Bourdain, but I have been on a weird and wild chef kick lately. Mitch Omer of Hell's Kitchen in Minneapolis is about as out there as they get. To get to the point in time of the cookbooks release he has been through years of untreated bipolar disorder, multiple addictions, several divorces, triple bypass surgery and plenty of other crazy adventures.

Sep 07, 2016 Mike Boothe rated it really liked it
This is not your ordinary cook book. Mitch Omer was not your ordinary chef. I knew Mitch in school in Des Moines, and then later on during college. No one that knew him would ever say he was ordinary.

Between the recipes is Mitch's autobiography, where Mitch explains much of his "out-there" life. It has to be read to be believed, and I was even present for a few of them. What we didn't know at the time, and neither did Mitch, was that he was bi-polar. It explained much.

Between the recipes is Mitch's autobiography, where Mitch explains much of his "out-there" life. It has to be read to be believed, and I was even present for a few of them. What we didn't know at the time, and neither did Mitch, was that he was bi-polar. It explained much.

I saw Mitch only 3 months before his very untimely death, but I sat and listened to him talk about his passion for his food, for "Hell's Kitchen" for his wife, for his employees, for life. It is exceedingly rare to see an actual passion like Mitch had he put it into everything. The food in the restaurant and in these recipes proves it.

Jan 15, 2011 Linda S rated it it was amazing
Shelves: food, book-wish-list
Loved this book. I read it through once. Now I want to make some of the recipes and even more than that, I want to go eat at Hell's Kitchen and try everything on the menu.

Dec 11, 2014 Becky rated it really liked it
Interesting book to just read, I only made a few recipes. The sausage bread is delicious. I tried to made hashbrowns once and they burned.

Crystal Krienke-bonkoski rated it it was amazing
Jul 07, 2016