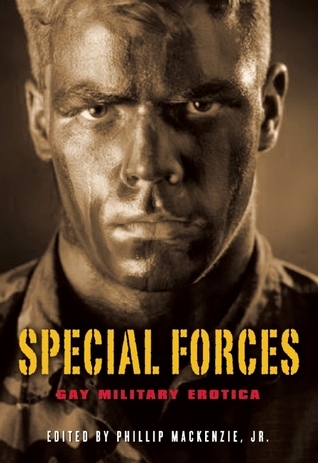 3.52
27 ratings9 reviews
Rate this book
Wherever a man slides into his BDU's and shoulders an M16, there's another man looking to take both off him -- and people who want to read about it. These sexually charged stories show military men in every branch of the service getting down. Special Forces is set in the heat of battle, public or private, where fear, urgency, and uncertainty lead to unexpected intimacy and release, where anger and terror fuel desire and attraction. The seasoned authors here, some of whom served in the military themselves, do not shy away from the hard realities of the fight, but allow it to heighten the eroticism. The collection includes Jack Fritscher ("Wild Blue Yonder"), T. Hitman ("To the Victors Go the Spoiled"), Simon Sheppard ("Stockholm Syndrome"), Jay Starre ("Between Shots Fire"), and many more.

Kassa
1,118 reviews109 followers
January 25, 2010
This anthology is listed Gay Military Erotica. Unfortunately the stories tend to be dark, depressing, and focus on the violence, anger, and rape of military situations rather than erotica in a military setting. The themes explored within the various stories definitely ring with authenticity, despite their gory description, but are out of place in an erotica anthology when rape and violence overwhelm the stories leaving very few sexy overtones. For those readers who don’t mind or actually enjoy gratuitous violence and painful rape in their erotica, this anthology could be for you. There are several stories that defy this trend and end up standing out well above the crowd, but even those are not enough to recommend this depressing collection.

The anthology starts out well with the humorous "Wild Blue Yonder" and continues with the entertaining, well-written "Friendly Fire" and hot, sexy fluff sex of "Between Shots Fired." Each of these stories show sex in its raw form between military men who know they could die at any moment. They manage to make connections, however fleetingly, and enjoy the brief release and pleasure before the fear of death creeps in again. These stories are entertaining with a strong thread of erotic detail woven into the different settings. However, the collection starts to take a dark turn with the next story about a prisoner of war used as a fuck buddy to the enemy. From here, the stories seem to delve into the anger of the situation, lashing out and using sex as a weapon against the men.

The dark overtones of over half of the stories feature overly gratuitous violence and painful rape, which is anything but sexy. The life or death situations alter the men involved, rising to questionable judgment and often sex is just an expression of the rage and hatred that has built up. The outpouring of emotion in brutal actions makes many of the stories hard to read and downright depressing. Although there is no happy ending expected, the lasting impression of pain and bloodthirsty vengeance is not erotic and actually quite disturbing. If the anthology had wanted to focus on such consequences, then the presence of contradictory stories focusing on quick, hot sex makes an awkward and disjointed collection.

Several of the stories fit well with the description of erotica in a military setting. Examples such as "Oasis," "Rohan," "Foxhole," and "In a Flash" all give rise to engaging stories, however brief with some sad themes. There is still violence and the specter of very real death, but each author doesn’t allow those elements to overwhelm the point of the story. Whereas others such as "Sarvis," "Stockholm Syndrome," "Good-bye Saigon," and "Field of Battle" are not enjoyable to read and disturbing for some. The writing in these stories focuses on the anger and violence of the situation, using sex and rape as a weapon and release. "DC Blues" is within this category but is well written with solid world building but the dark tone and cruel actions litter the story, which doesn’t belong in an erotica collection.

The overall writing of the anthology is up and down. Some stories are much better written than others with some having no purpose other than fluff sex or overwhelming rage. Some stories succeed in introducing characters, setting, and breathed life into the plot while others merely existed to shock. The uneven pacing and tone of the collection makes for one not easy to read and the lasting impression is of wartime abuse, atrocities, and horror. The themes are meant to show how war affects men and can express these emotions through sex and anger. These stories sit juxtaposed to erotica stories meant to titillate in a military setting and ultimately the anthology fails on both attempts.

I wouldn’t recommend this anthology unfortunately. Some of the stories are entertaining and fun and others show an authentic message about consequences of war. Together, the disturbing result is not a good one, which is unfortunate as there are some great stories included. Hopefully the authors will publish them elsewhere so they can shine in the right setting.
Marquesate
Author 19 books276 followers
Read
October 7, 2011
"Friendly Fire" is a 6K short story by Marquesate, set in the current war in Afghanistan.

British Sergeant Major Phil Mason, and American Gunnery Sergeant Jon Rivera, take part in friendly fire, only to encounter enemy fire, which forces them to work together to survive in the Afghan mountains. These two soldiers are alpha men, fuelled by aggression that finds an outlet in more than fighting.

"Friendly Fire" is part of this anthology. I can't personally recommend the whole anthology, which is a shame, but the readers Kassa and J.Rocci have said everything in their review that I could say.Marquesate

J. Rocci
Author 36 books40 followers
January 16, 2011
I have to agree with Kassa's review of this one. I debated between "didn't like it" and "it was okay," and I honestly only chose "it was okay" for one of the stories, "Friendly Fire." I hate leaving bad reviews, so I'm not going to dwell on the writing quality of some, but I was honestly disappointed by the time I reached the back cover.

Aside from the majority of the stories having dark overtones -- and the rape, violence and consent issues that Kassa articulates quite well in her review -- I have to admit that I was disappointed to find only three stories out of fifteen are set in the last decade, and one of those has a futuristic What If? plot.

Reading the synopsis, with the opening lines of M16s and BDUs, I didn't expect to read mostly historical settings (to include the Civil War, WWI, WWII, and Vietnam) or science fiction settings (Moon City, Christian States of America?). Granted, the term special forces has been institutionalized since WWII, but the cover and the back synopsis didn't give the impression of a historical anthology at all. Add in the horrific consent and violence issues, and this anthology didn't strike me as "erotic" after the third story. Some warning before I spent $15 on the paperback would have been appreciated.
Mountie
165 reviews
August 25, 2011
Worth the buy for Marquesate's story.

Boycop
77 reviews19 followers
October 27, 2011
I did not even remember reading this anthology, until I came across it again.

There are complaints about this being dark an depressing.
Well, I like it dark and gritty, but this still failed me totally. If I recall correctly, I skipped a lot of the stories because there was either no point in them, or they just had boring characters. One or two decent stories does not make an anthology.
NLA-I Awards
29 reviews8 followers
November 20, 2014
Contains Jack Fritscher's "Goodbye Saigon," a great tale of rough trade that received the honorable mention in the National Leather Association's John Preston Award for short stories published in 2009.

Jamie Freeman
Author 46 books13 followers
Read
January 12, 2010
My dark short story "The D.C. Blues" is included in this anthology. This one is dark, violent and a little bit disturbing.

Zach
30 reviews1 follower
June 20, 2016
First off, very hot book. very few of the stories weren't well written and nice. I'd just like to highlight Stockholm Syndrome as my personally favorite.

OkayKim
1,136 reviews
July 11, 2013
Friendly Fire was about the only decent story in this collection. Just wish it had been longer. Too short!