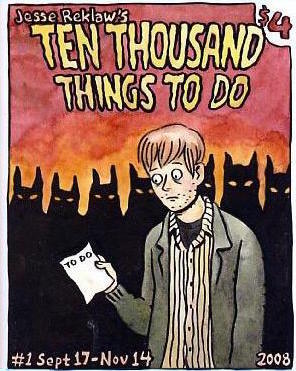 Ten Thousand Things to Do

4.00
10 ratings5 reviews
Rate this book
I started this diary comic partly to promote my new book - The Night of Your Life, a collection of my weekly comic strip, Slow Wave, in which I draw other people's actual dreams - but also I wanted to document my day-to-day moods, and to see if I discovered any connections or patterns. Drawing these comics every day has been a great way to keep my drawing muscle in shape, and it's also a tiny reward to actually finish something every day. I think I'll keep doing these for a year. They're posted on my Flickr page: www.flickr.com/photos/jessereklaw

4.00
10 ratings5 reviews
5 stars
3 (30%)
4 stars
4 (40%)
3 stars
3 (30%)
2 stars
0 (0%)
1 star
0 (0%)
Displaying 1 - 5 of 5 reviews
Robert
Author 31 books116 followers
April 26, 2013
I first read Ten Thousand Things to Do by Portland cartoonist Jesse Reklaw back when it was originally published in the form of a series of thick minicomics in 2009. Prior to that I’d never read this type of comic in such sustained form, just the occasional diarist entries of John Porcellino in his King Cat series, and actually a whole book called Spaniel Rage by Vanessa Davis; however, both Porcellino and Davis employ much sparer graphics & text than Reklaw, who fills every panel on every page here with rich visual detail and lots and lots of text. It makes for dense reading, and as there’s a whole year’s worth of entries (plus a forward and epilogue added for the book), it does take some time to get through - it took me about 2 weeks to re-read it, as comics like this are best experienced in shorter bursts, a little at a time. I have to admit I just didn’t get TTTTD upon my first encounter with it: “why he is listing all his daily activities and To Do lists on and on like this and why should I care?” Turns out I started really getting into it by the second volume, sort of hypnotized by it really, and yes caring too, all the while truly admiring Reklaw’s excellent drawings, his dry sense of humor, & storytelling skills. As a bonus, in times of exhaustion and/or previously unforeseeable roadblocks Reklaw called upon the help of some of his (many) cartoonist friends, among them T. Edward Bak, Aron Nels Steinke, Clutch McBastard, Theo Ellsworth, then girlfriend Andrice Arp, and Vanessa Davis herself to render guest entries, which is a real treat, as each artist employs Reklaw's "then I did this, then I did that" format, each with their own individual artistic stamp, naturally. Interestingly, some of these folks have really come into their own in the field since then. This little brick of a book is a great bedside companion for fans of autobio/diary comics, and a fine appetizer for the upcoming Couch Tag, Reklaw’s graphic memoir, due out later this year from Fantagraphics. Really looking forward to that.

Bjorn Sorensen
136 reviews12 followers
May 10, 2009
Reklaw scores again with an ultra-realistic, revealing comic diary of his life. We learn about his bouts with depression, bodily aches and pains, his doubts about our 2-party system, yet also his feverish work habits. It reminded me a little of a Jefferson's episode I'd watched the night before in which Wheezy wonders how George can work all the time. "I'm just built that way," he says, strutting away to another assignment. Reklaw's book moved up my list with its occasional laugh-out-loud drawings, guest panels from other artists and "Bonus Election Comics" at the end. A classic panel reads:

Got up at 9:30-first full night's sleep in a week. Some people think comic book tours are all about binge drinking, drugs, and groupies. But it's not like that.

Below that is a drawing that looks like a cross between a "Girl's Gone Wild" ad and a raging frat party. Reklaw stands in the middle, about to take a swig of whiskey while shouting "Just Kidding!"... Great stuff to display as your desktop image.

Again, his work is a limited by the four-panel format. Interesting conversations are abruptly stopped, references to unknown people and organizations frequently made, and an overall theme up for grabs. It's as if Reklaw's massive to-do list limits his use of sarcasm or abstraction.

There's still a lot to relate to here, and it kept me going and thinking. This is, sadly, my late-in-my-thirties intro to the comic book world. I have a lot of catching up to do.

Jason
Author 1 book9 followers
July 26, 2010
Diary comics get a bad rap. Yes, they can be repetitive, and some days are bound to be more exciting than others, but when they're good they pick up a sort of momentum after awhile. They add up to more than the sum of their parts.

Jesse's comics do this and go one step further, as he throws his own innovations into the mix: daily mood charts, "guest weeks" where his friends take over the comic for a week, strips that document all 24 hours in a day, strips written from the point of view of his cat, etc. I also appreciated his openness in talking about some of his mental/emotional problems (obsessive thoughts, unexplained sadness, etc). There were multiple times when I thought, "Thank god, I'm not the only one!" and to me that's what autobiographical comics are all about.

My only regret is that I read it all long after the fact, instead of following his daily Flickr posts like most of my friends did. It would've been fun to follow along, and cheer him on, as it was all happening.
MariNaomi
Author 33 books388 followers
August 16, 2010
A fantastic journal comic--great art, and a lot of content. I got caught up in his day-to-day stuff, grew attached to the people in his life, and when it ended I was sad that it was over. In fact, want more!

Kevin Hogan
249 reviews1 follower
February 4, 2014
This diary comic is the missing link between "Slow Wave" and "Couch Tag." It was a pleasant diversion, but I don't know that I would re-read it.
Displaying 1 - 5 of 5 reviews