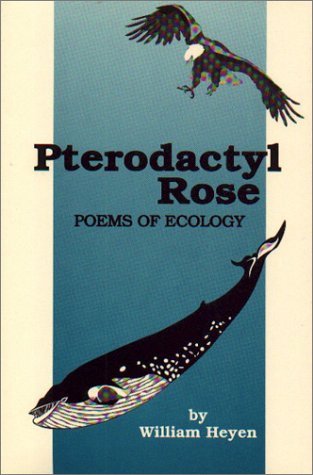 4.25
8 ratings2 reviews
Rate this book
In the title poem of Pterodactyl Rose, the speaker tells us that when he peers into his rearview mirror, he imagines the air behind him filling with the bodies of those ancient creatures his engine is burning. He says he is wild with prayer and longing, as we all are, entering a century that may determine whether mankind will have a long tenure on this planet or will be just another vanished species. In poem after poem here, Heyen probes the roots of our unprecedented ecological crisis and carries us with him.

85 books7 followers
William Heyen was born in Brooklyn, New York, in 1940, and raised in Suffolk County by German immigrant parents. His graduate degrees are from Ohio University. A former Senior Fulbright Lecturer in American Literature in Germany, he has been honored with NEA, Guggenheim, American Academy of Arts & Letters and other awards. His poetry has appeared in the Atlantic, The New Yorker, Harper’s, American Poetry Review, The Southern Review, and in hundreds of other magazines and anthologies. His Crazy Horse in Stillness won the Small Press Book Award in 1997; Shoah Train: Poems was a finalist for the National Book Award in 2004. Heyen is Professor of English/Poet in Residence Emeritus at his undergraduate alma mater, SUNY Brockport.
Etruscan also published his September 11, 2001: American Writers Respond (2002), The Confessions of Doc Williams & Other Poems (2006), A Poetics of Hiroshima (2008), and The Football Corporations (2011).

His work has appeared in Harper’s, The New Yorker, American Poetry Review, TriQuarterly, The Nation,The Ontario Review, and in over one hundred anthologies. Heyen is the author of: Erika: Poems of the Holocaust; The Host: Selected Poems 1965-1990 (both Time-Being Books, 1991, 1994); Diana, Charles, & the Queen; Crazy Horse in Stillness (both from BOA Editions, Ltd, 1998, 1996), the latter of which won the 1997 National Small Press Book Award for Poetry.

Ian
188 reviews24 followers
March 10, 2010
What I admire most about this book is the enormous risk Heyen took in trying to write about the death of our world. But it's a subject that lends itself to naivety, preachiness and didacticism. Still, there are a few gems in here, which is why I didn't give the book two stars.
Displaying 1 - 2 of 2 reviews