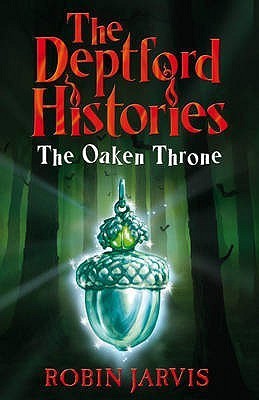 4.25
535 ratings16 reviews
Rate this book
'The Oaken Throne' charts the dark wars between the bats and the squirrels. Vesper, a young bat, and Ysabelle, the squirrel maiden are unaware of the events that will sweep them along on a nightmarish journey.

X
195 reviews
July 25, 2010
I think I should learn that Jarvis's books are very close to being dark fantasy/horror. I was surprised by how dark this book was, but it was very good. It's a dark fantasy/quest story with animal protagonists, but it is also a story of friendship, prejudice, religion and fate vs. freewill. I cared a lot about the main characters (very unfortunate in any Jarvis book, I am learning), and through out the book was never sure which of the other characters were good or bad.

Very good, very dark, and certainly not for all tastes.

Becky
367 reviews
June 7, 2009
This is the second Robin Jarvis novel I've read, and I continue to be amazed at how dark and depressing a story about squirrels, bats and mice can be. I enjoyed the characters and the world Jarvis created, but the evil forces presented in the book are truly frightening.

Mariel
18 reviews
October 6, 2019
I was lucky enough to have Robin Jarvis come to the Secondary School I was in, and do a talk about writing to encourage us kids. He also had a sale of his books at the end and signed any we bought for us. From his descriptions of Vesper the bat, I just knew I had to get a book with that character in it, and thus bought this one (not caring it was the second part in a series). I still have and treasure that signed copy, and re-read it from time to time.

His writing brings the scenes to life to the point I can see them now as I write about the book. The story is about families of bats and squirrels at war with each other, at a fight for who will rule on the Oaken Throne. If you liked Redwall or the Deptford Mice series, this is one for you.

Isaiah Erby
1 review
November 3, 2015
I think that there should be an entire series dedicated to this book alone. I personally want to continue reading what happens to the characters. When people read books they can become one with the characters and I need another story until then I am frozen in time and just going through the motions.

Erica
10 reviews
June 12, 2013
Dark, but engrossing. Lots of action, and ends with a tragic twist. Don't expect daises and sunshine from the Oaken Throne. Do expect murder, cannibalistic rituals, conniving squirrels, freaky hares, interspecies love, ghosts and other ghastly things, pure evil shooting up from the ground, and one hell of a ride.
Tim
233 reviews7 followers
June 18, 2013
I LOVED this book - this is one of Jarvis's best.

Nothing like becoming engrossed in a story with a twist which takes your breath away, and an ending that brings a tear to your eye! Beautifully written and one of my favourite books.

I did not to expect to enjoy this nearly as much as I did. But man, I loved this book. The characters are all so charming; the characters of Tysle and Giraldous were certainly my favorite pair. Their story is so sweet and…Oh man Tysle…Loved that little guy. My heart breaks for him.

The gothic horror elements were fantastic. The cult of Hobb is absolutely horrific and demonic one every level. They make the Word cult of Duncton Quest seem civilized by comparison. I loved the setting of Medieval times, and the more Shakespearian dialogue definitely brought me into the time period. Another thing I loved is that I could easily distinguish a character’s dialogue tag before I saw who spoke; masterfully done, as there have been cases where I struggle distinguishing characters in other works. Also, the dialogue reminded me a bit of the Book of the Dun Cow, which I also enjoyed. Oh man…What else? OOOh a treacherous villain??? Loved him; what a bastard he was. While I did suspect who he really was early on, I still smiled from ear to ear when he revealed his true self to the heroes as a gloating maniac. It has been too long since i had reveled in a villain’s evilness.

While it was still a quest-story (A subject I’m not particularly drawn to, notably if that is all the story is), I was engaged from beginning to end, and I had no idea where it was heading. The characters and their stories had my every investment. As for the faults, I would’ve liked to have more politics explored in a Game of Thrones way, with a few of the other squirrel Noble Houses getting some mention or some kind of subplot. What were the other squirrel kingdoms like, for example? And honestly with such a huge scope this story demanded, I feel it was too short; at least two more installments would’ve been perfect! But, considering the hellish chaotic world they lived in, it probably wasn’t needed; it’s about the characters and their own journeys, which it delivered well. While I think it would’ve made for a great trilogy if the author had gotten a bit further with it, it still works as a stand-alone. Not everything needs to be epic trilogies, after all, and I need to remember that.

I don’t want to spoil too much, but that ending…I was not expecting. You’d think all would be happy, especially after all that hell they went through, but staying true to its dark thematic tone, it really rips out your heart in the final paragraph.

After so many okay or average reading, this was such a pleasant surprise.

Felix
121 reviews
October 17, 2018
I just found my new favorite book.
Mandy
63 reviews4 followers
March 29, 2016
I've always preferred Robin's humanity-based books to his woodland creature features, but I have to say this one was uncommonly good; almost a miniature Lord of The Rings of The Forest. Twists and turns aplenty, as you'd expect from the master, and every one of them signposted to high heaven when you go back to check if you've been duped or not. But Robin, Robin, Robin - and I need to write this carefully to avoid spoilers - what you did to him at the end, oh, that's so cruel. So, so cruel. It's why I love your books, but it's also why, in my heart of hearts, you make me despair.

Lovely stuff! :)
Matthew Hodge
593 reviews21 followers
September 25, 2022
A little bit Shakespeare, a little bit Canterbury tales, a little bit Tolkien. One of Mr Jarvis' more unusual outings, it tells the back story of the animosity between the bats and the squirrels that is hinted at in the original Deptford Mice trilogy.

Might not be everyone's cup of tea (because there's some bloodthirsty stuff in there) but some of the chapters are surprisingly powerful.

Tim Jones
51 reviews1 follower
February 5, 2008
Another great kids for all ages book. This book follows the adventure of the squirrel world.
Winifred
155 reviews3 followers
February 27, 2010
I liked this book. Good against evil in the animal world. Characters strive to get to greenreach, which is like the holy place.

Edward Davies
Author 3 books35 followers
June 19, 2015
You start to expect twists in Jarvis's books by this stage, and this doesn't disappoint. A dark quest which shows the reasons behind the loathing felt between the squiirels and the bats.

Alan
167 reviews24 followers
April 8, 2021
BLOODY HELL. I might never recover from that ending.

Patricia Robinson
Author 1 book14 followers
April 3, 2017
This is one of my most favorite books of all time. Those looking for a strong female character will find one in Ysabelle, the main protagonist who goes on a perilous journey to take her place as queen regnant of the squirrels. Along the way she learns powerful lessons about love, loyalty, and duty. It's unfortunate that this book is not well known. I think many people would enjoy it and benefit from reading it. It might be about anthropomorphic rodents, but don't be put off by that and think it's just for kids. There are some very intense, dramatic, and sometimes violent scenes.

Cara
76 reviews27 followers
Read
May 24, 2018
it's probably been 15 years since I read this book but I still remember the ending because it ruined me emotionally.
Displaying 1 - 16 of 16 reviews