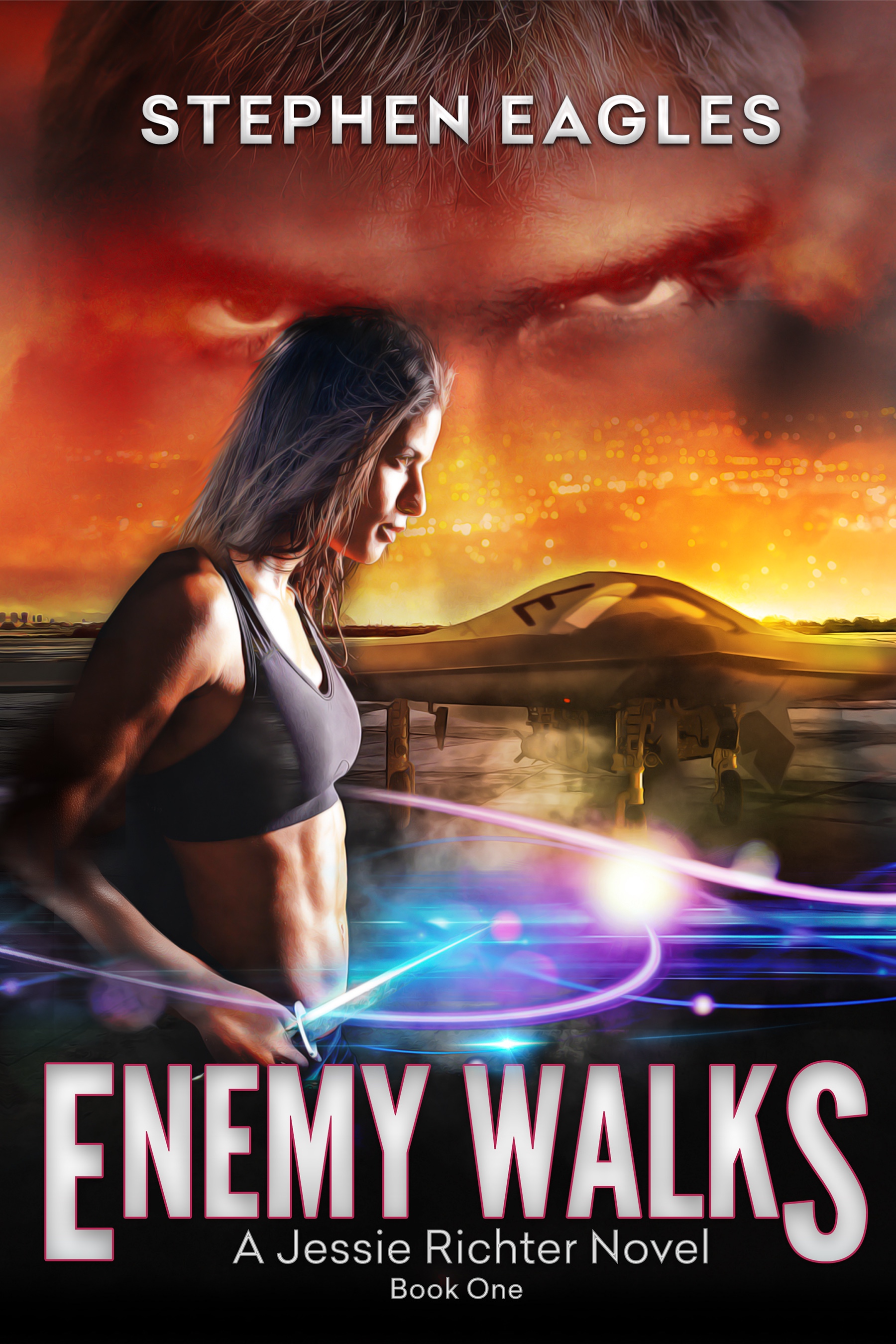 4.80
5 ratings5 reviews
Rate this book
Someone once said "To truly know someone, you must walk a mile in their shoes." Supernatural spy Jessie Richter wouldn't have it any other way.

She's on what should have been a simple, and quite literally "walk-in, walk-out" espionage mission, until breadcrumbs are left behind. Breadcrumbs that do not go un-noticed, putting Jessie's life and the lives of her team in danger. But Jessie's a "Walker", and there are some fates worse than death.

Enemy Walks is the first novel by debut indie-author Stephen Eagles. Enemy Way, Book 2 is also published and ready to suck you in, as well as a prequel novella, ENEMY MINE: Origins, which is free from Stephen's website when you sign up for his newsletter.

4.80
5 ratings5 reviews
5 stars
4 (80%)
4 stars
1 (20%)
3 stars
0 (0%)
2 stars
0 (0%)
1 star
0 (0%)
Displaying 1 - 5 of 5 reviews
Linda Robinson
1 review
January 17, 2021
Author gets a 4 star for having a good story and the 5th star for new perspective on transferring consciousness. Enemy Walk's main character, Jessie, is strong, smart, and fearless. The author obviously has a vast knowledge of weapons, fighting, and how to keep you wondering what will happen next. This book has guns, sex, fighting, love, and crime. If you want an action packed book with plots that dip both into cyber and supernatural ... this book is for you!
Mimi Corbitt
3 reviews
January 6, 2021
WOW. I had read the novella (it was free and a short read–like-4 hours) and it was good enough to make me want to pick up Book 1, Enemy Walks. The problem I had with this book is that I started it at around 7pm on a work night, and didn’t put it down until 1am! It’s a real page turner, jumping right into Jessie on a mission (I’ll be careful not to give spoilers). The free novella explained her special “ability” well enough, but this book really gives it to you from the “targets” perspective, and it’s just crazy! The book is fast paced, well written, and although I’m not into spy novels, this didn’t feel like one because it’s from the closer perspective of Jessie, (I’m not sure what the term is), but it feels more personal than say, a James Bond flick or Jack Ryan. Those seem to be geared toward the mission, where these books are geared toward how Jessie plans to complete the mission when she comes up against... Oops! Sorry, no spoilers here either. But Stephen Eagles creates one hell of a antagonist. So it’s a mash up of genres. Part thriller spy novel, with sci-fi/superpower elements. Also great is that the author (I read he was a police officer and in military) doesn’t go overboard on the military details, or “write over my head” regarding the equipment, but it all sounded plausible to me. Some books I’ve read get too much into the “tech” aspects, and it slows down the pace. Eagles did a good job with pacing. So, now onto book 2, Enemy Way!
Brandi Schonberg
Author 2 books5 followers
December 31, 2020
Enemy Walks is a thrilling page-turner!
Discovering a story about a supernatural spy was such a fresh take in what seems like a saturated-with-status-quo genre. The plot is original, the story is gripping, and the characters are well-developed and relatable. The pace of the book is on-point and doesn't let up for a minute! This is a book you will find yourself quickly connected to and wanting to know more after you read the last page!
Adam Fielding
3 reviews
January 22, 2021
Awesome story. I wasn’t really sure if I was reading a spy-thriller, sci-if, military or supernatural, but in the end, I had to settle on “all of the above”. I really thought the story was kind of unique. would have to say that I’m not really a big reader. But after picking up the Novella (it was free at the time), I found the story interesting enough to move onto this book, Enemy Walks, book 1. And wow. This was much different than I expected. A female spy with a superpower, kind of reminded me of x-men a bit. But what really interested me were the character flaws– the challenges she faced for being stubborn (at least I thought she was), and the all around bad-assery. As a former British Army Airbone soldier, I found the military aspects on point, and not too deep or overdone (although I like that). The intel background of the author comes through as authentic. Some things the author wrote, I felt he might have had similar resources to say, Tom Clancy. Wouldn’t be surprised if the NSA has a talk with him. LOL.

The action is non-stop, the main heroine, Jessie, and the bad-guys are super-solid, believable characters. This is a page turner, and as I said, I’m not much of a reader, but I’ll be starting the next book tomorrow. This one gets a solid five stars from me.
Jannifer
26 reviews
January 31, 2021
Good, solid, well-written thriller with military, sci-fi, and supernatural elements.
Displaying 1 - 5 of 5 reviews