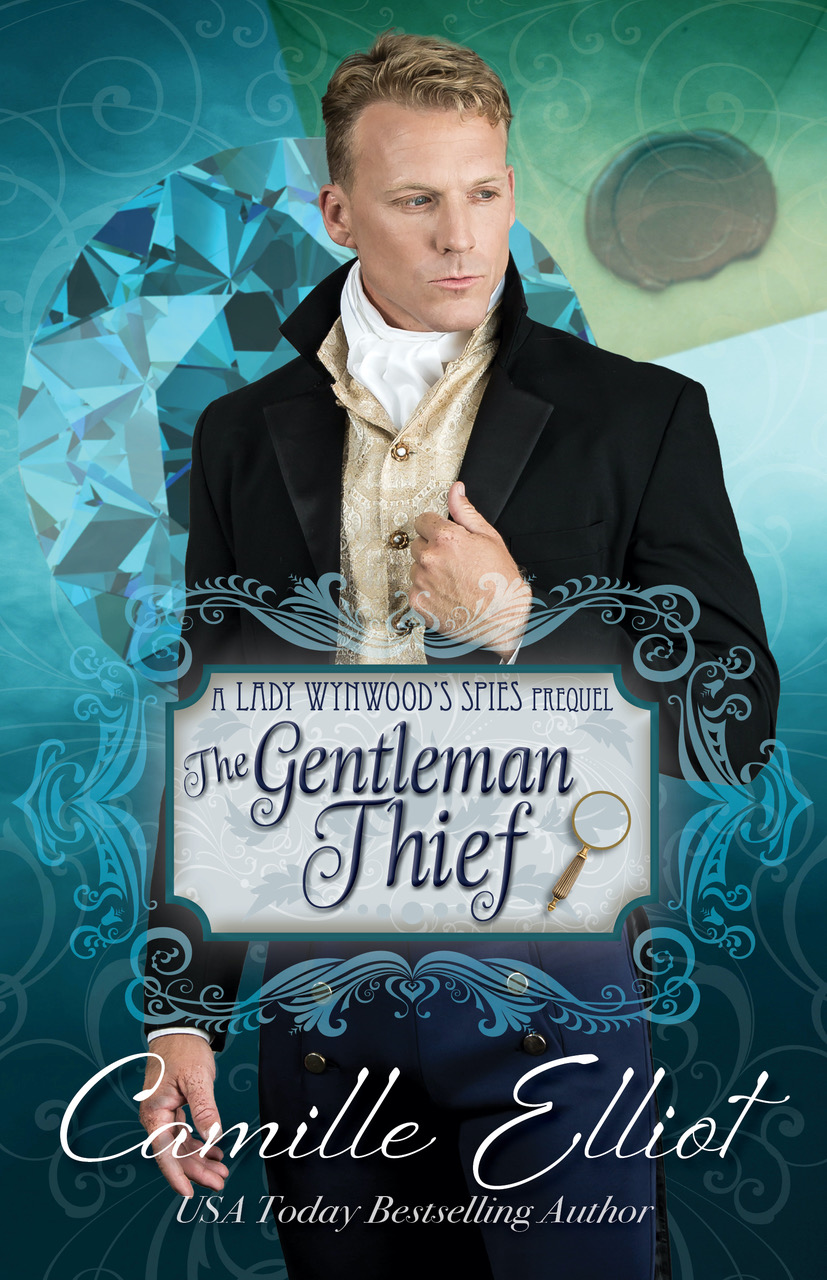 A mysterious thief has been committing daring heists and stealing rare, exquisite gemstones during the time their owners are throwing grand parties for the Season. Mr. Solomon Drydale, a clandestine agent for the Crown, is baffled because the thefts bear the mark of a former agent whom he mentored.

Sol is tasked with finding the agent, Mr. Stewart Allinton, who is attending a birthday celebration at a country manor house, but Sol is determined to speak to Allinton first before bringing him in.

However, there is more at stake than a few gemstones, and with the help of his friend, Lady Wynwood, he discovers that the few acts of larceny may be connected to high treason …

This is a stand-alone story that occurs after The Spinster’s Christmas and before Lady Wynwood’s Spies, volume 1: Archer. IF YOU WANT TO LEAVE ME A MESSAGE, please go to my other Goodreads author profile, since I don't log into this one very often:
https://www.goodreads.com/author/show...

3.81
27 ratings14 reviews
5 stars
5 (18%)
4 stars
14 (51%)
3 stars
7 (25%)
2 stars
0 (0%)
1 star
1 (3%)
Displaying 1 - 14 of 14 reviews
Beth
775 reviews315 followers
November 16, 2020
I actually ended up enjoying this more than I did The Spinster's Christmas! This story centered more on Lady Wynwood and Solomon Drydale (who looks a lot like Robert Downey Jr., but never mind that). There is much more action in this story than what I supposed there to be, and it also gives readers a good background on both of these characters. There is also a lot of action type sequences in this story that are so fun! There's suspense with a Regency flair, and I'm definitely here for it.

I'm also hoping that we'll see Lena Penrose again because she was much too intriguing for just a by your leave appearance in this novella. The author said in a recent newsletter that this will be a longer series, so I'm hopeful to see her again as perhaps a more main character in book to come.

I received a complimentary copy of this novella; a positive review was not required, and these are my honest thoughts and opinions.

Loraine
2,886 reviews
Read
November 18, 2020
This novella is the second prequel to Lady Wynwood's Spies. In this novella, we get a closer look at two of the main characters of the series: Lady Wynwood and Solomon Drydale. Solomon has a secret life in which he helps the government track down criminals. He doesn't think Lady Wynwood knows about it, but she suspects a whole lot more than she lets on. When he finally lets her in on his secret life, he finds that Lady Wynwood is just as good at catching criminals as he is.

The story starts a little slow, but when the pace picks up it doesn't stop until the end where Camille Elliot left me hanging and shouting for MORE MORE MORE and DON'T STOP NOW! The secondary characters were wonderful, and I especially enjoyed both the twins and Lena Pearson and the roles they played.

Regency at it's best with a touch of adventure, a smidgen of romance, and a shiver of suspense. I will be starting Book 1: Lady's Wynwood's Spies: Archer this evening.

**I received a complimentary copy of this book from the author. Opinions are mine alone. I was not compensated for this review.

Staci
1,626 reviews503 followers
November 21, 2020
Intriguing! Regency with quite a bit of subterfuge. Loved the role "Mary" played in this novella. This just whet appetite for the first full length novel of the series: Archer.

My gratitude to the author for a complimentary copy of this novella. I was not required to post a review and all opinions expressed are my own.

Sarita
1,043 reviews624 followers
March 22, 2021
This started out a bit slow for me, but it build up with a great pace where you just want to see what happens. A few revelations I suspected, but I still enjoyed how the others discovered it. I loved Lady Lynwood’s Twins and would love to see more of them. But the one I really want to learn from is Lena Pearson. The author grabbed my interest in finding out more about her with the few hints thrown in this novella.

*I received a free copy from the author via her newsletter. All opinions expressed are my own.*

Melissa
2,159 reviews204 followers
November 22, 2020
This was very well written except that I constantly felt like I was missing something. It felt like this was the middle of a story. Then almost at the ending a whole new mystery unfolded and I was pretty lost. This does go into another book but it felt very incomplete.
Nicole
Author 13 books124 followers
November 12, 2020
A wonderful introduction to this series, with lots of characters to meet and to look forward to meeting again!
Nadine Keels
Author 38 books167 followers
November 17, 2020
There's a highly skilled jewel thief making the rounds to parties in London this Season. And Solomon Drydale, an agent for the Crown, worries that the culprit may be a former agent Sol once mentored in The Gentleman Thief by author Camille Elliot.

While the first prequel in the Lady Wynwood's Spies series, The Spinster's Christmas, is solid as a standalone, I wouldn't say this prequel novella stands alone to the same solid degree. It opens and closes with storylines it doesn't complete, although there's a finished story in the middle.

I was a little disoriented for a while, as this felt kind of like plunging into the middle of a river. There are also a lot of different characters and titles named throughout the read, and it would've taken more effort than I gave it to keep clear track of everybody's identities.

Even so, as I gradually got into the suspense, it confirmed my preference for Regency stories like this that have some kick to them—sharp key players, intrigue, action, and yes, even violence where the plot calls for it—rather than tales limited to dances, heart palpitations, and tea. (Nothing against Regency romances in general; I just want something wittier or grittier than a basic tale about who's going to dance with or propose to whom. This heist story isn't basic!)

I'm looking forward to the continuation of the series.
_________
I received a complimentary copy of this book, for which I've given an honest review.
Judy
2,977 reviews
January 4, 2021
The Gentleman Thief by Camille Elliot
Lady Wynwood’s Spies Series Prequel
This is a series that will be ongoing through each book. The Spinster’s Christmas is also part of the series, so there are two prequels before Archer, which will be volume one.

There are many characters in this book. The Rampart’s, a secret group of spies for the government, is after a jewel thief. He’s been stealing jewels during balls and parties that he has somehow been invited to. Mr. Solomon “Sol” Drydale is put on the case.

In this story, one part of the case is solved, but the mystery of who is behind it is continued into the next book. Page-turning adventure. Maybe a touch of romance, but nothing obvious.
https://justjudysjumbles.blogspot.com...
Soojin
40 reviews
November 24, 2020
Read this book after reading Lady Wynwood's Spies Volume 1: Archer - and it really does add to the novel. Gentleman Thief, which is a stand alone story, does lay the background of the special agency and the unknown network of villains at work. Though I didn't quite understand the connection with the thefts and the final product that was being analyzed, I still enjoyed the fast paced story - that still characters having the emotional and spiritual crises. It also gave depth to the characters of Lady Wynwood and Sol, who serve as important characters in the "Archer" but are not fleshed out as much, probably because this was done in "The Gentleman Thief." Enjoyable read.
Courtney
2,331 reviews7 followers
December 7, 2020
This is a fun, action-packed prequel, bridging the gap between her two longer releases. It’s very much a companion to the previous book and leading into the next, so I don’t recommend this as a starting point for the series. It’s fun to see more of a mystery/suspense side with Sol carrying out his work for Lady Wynwood and their relationship.
Lis K
454 reviews
January 10, 2021
A great start to a serial! I think you can read this without having read "The Spinster's Christmas" but I would recommend reading that story since it introduces you to Lady Wynwood and Sol Drydale. This was a fast read with action, suspense, spiritual thread, and enough mystery to want to keep reading the next installment.
Sandra Devault
66 reviews2 followers
January 20, 2022
This book gave a better understanding to book 1. It is a quick, enjoyable read.
Heidi
726 reviews4 followers
March 6, 2022
What a great additional prequel! I hope to read the series of Lady Wynwood's Spies!
Cynthia
22 reviews2 followers
January 4, 2023
Another good prequel to the Lady Wynwood's Spies series and worth the reading. You get to know some characters who prove to be very important in the series. If you enjoy reading novels set in the Regency Period in England and like a good mystery, give this book (and the series) a read.
Displaying 1 - 14 of 14 reviews