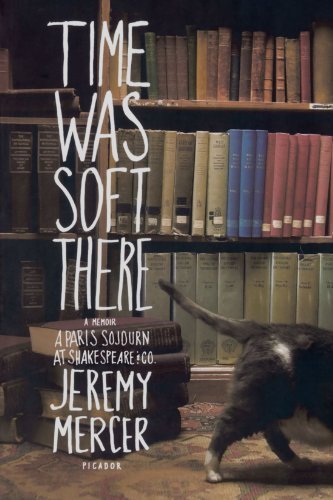 Time Was Soft There: A Paris Sojourn at Shakespeare & Co.

3.85
3,630 ratings574 reviews
Rate this book
Wandering through Paris's Left Bank one day, poor and unemployed, Canadian reporter Jeremy Mercer ducked into a little bookstore called Shakespeare & Co. Mercer bought a book, and the staff invited him up for tea. Within weeks, he was living above the store, working for the proprietor, George Whitman, patron saint of the city's down-and-out writers, and immersing himself in the love affairs and low-down watering holes of the shop's makeshift staff. Time Was Soft There is the story of a journey down a literary rabbit hole in the shadow of Notre Dame, to a place where a hidden bohemia still thrives.

Mercer bought a book, and the staff invited him up for tea.

Within weeks, he was living above the store, working for the proprietor, George Whitman, patron saint of the city's down-and-out writers, and immersing himself in the love affairs and low-down watering holes of the shop's makeshift staff.

Time Was Soft There is the story of a journey down a literary rabbit hole in the shadow of Notre Dame, to a place where a hidden bohemia still thrives.

Mathew Paust
Author 6 books13 followers
January 30, 2013
[I'm going to join the uncool kids who gave this five stars, realizing, of course, my credibility as a reviewer likely will take a huge unrecoverable hit from the cool kids who gave it fewer, for whom, I suspect, giving any book the full five stars would mark them as forgettably naive.]

After 44 years I still don't know what it was about me George Whitman didn't like, if anything. It might have been my haircut. He might have thought I was a CIA agent. I was an American on leave from the Army and Whitman's Communist convictions were causing him official problems in the mid-1960s. The French government even shut him down for a while in 1968 accusing him of housing Communists during the May student riots in Paris, which he was.

I met him in May 1966. We were never introduced, but I spoke with him one time at the front desk of his bookstore. Our conversation went something like this: "Excuse me, do you have anything by Rousseau?" I had to repeat this once or twice, as Whitman seemed absorbed by something, either something on his desk or in his mind. Eventually he turned his head, barely enough to look at me. His face conveyed annoyance, if not incipient contempt.

"What did you say?" From the loaded indifference in his voice he might have been on the verge of telling me to get the hell out of his sight. I repeated my question. My mistake, I soon learned, was in mispronouncing "Rousseau," probably misplacing the accent or even dragging the esses to sound like zees. He made me repeat my blunder another time or two before correcting me, his voice now curled in a sneer. When I nodded yes, he growled no, stared hard at me a moment longer and then turned back to whatever had been occupying his attention.

What surely clinched the unfavorable impression he'd evidently already formed of me was the book I finally purchased. It was a paperback copy of Dashiell Hammett's The Maltese Falcon. Not a bad choice for a detective novel, but, as I was to learn just the other day, Whitman has a low opinion of the genre. Other than to take my money and put the famous Shakespeare and Co. stamp in my purchased books, he never bothered to even glance at me again on my numerous successive visits his store.

Stationed in West Germany I'd saved up my leave time and spent it all in Paris - two or three weeks. A friend who had just returned from the City of Light raved about the famous bookstore on the Left Bank facing Notre Dame. It was named after the literary hangout for Lost Generation expatriots in the 1920s and '30s run by Sylvia Beach. Her store had achieved international acclaim for publishing James Joyce's Ulysses and was personally liberated from the Nazis by Ernest Hemingway. Whitman's successor to the legendary Beach bookstore, in a different location, had won recognition by a new generation of young literati, with luminaries such as Ginsberg, Corso, Kerouac and Ferlinghetti frequenting the place, sleeping, writing and working there occasionally and giving readings. Whitman published Ginsberg's Howl, when no one else would touch the cutting-edge poem that became an anthem for the Beat Generation.

During his sojourn in Paris my literary Army buddy had gotten to know a young writer Whitman befriended after learning the man was sleeping under a bridge over the Seine. The writer was now living and writing at the bookstore. Sounded like my kind of place. Even after the cold reception I got from Whitman, I couldn't stay away, seduced by its exotic ambience.

I have been seduced anew by Jeremy Mercer's charming memoir of the months he spent in Paris in 1999 living at Shakespeare and Co. Mercer ended up at the bookstore after fleeing to Paris from Ottawa where he'd been a crime reporter and had seriously pissed off an ex-convict who vowed revenge. Mercer's book, Time Was Soft There, brought back memories and dreams from my time in Paris and shed some light on the personality of George Whitman, the man I'd annoyed or worried more than four decades earlier.

Whitman, it seems, continued throughout the years to be suspicious of Americans, considering anyone he didn't know to be a potential CIA agent. He's a moody man and can be grumpy and hostile without warning, and he loathes detective mysteries.

A Google search indicates Whitman is pushing 100 years of age but is still kicking, although he has turned over the Shakespeare and Co. keys to his daughter, Sylvia.

To find another wonderland you can read this book. Writer and readers travel together beetwin books and people in paris and find their way to lights. This book is really amazing to start a new idea. Lets start... . 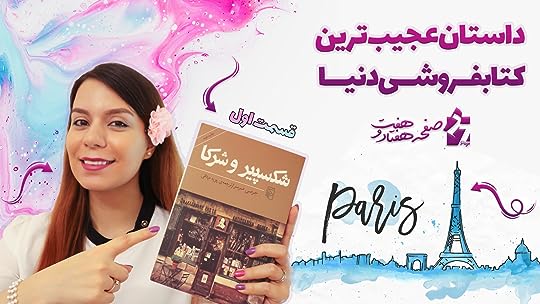 WarpDrive
272 reviews379 followers
January 4, 2019
An endearing, delightfully charming personal memoir about living in one of the most famous, unique and culturally significant bookstores in the world: "Shakespeare and Company" in Paris.

Virtually everybody (maybe with the exception of the likes of Donald Trump, I guess) would have heard of this mythical bookstore located in the beguiling heart of beautiful Paris, on La Rive Gauche of the Seine River, an area historically known as one of the foremost cultural and artistic parts of the city, a neighborhood where the likes of Picasso, Matisse, and Hemingway once lived.
An area where, like in most of central Paris, you can breath and savour the sophistication, elegance, rich cultural history and a tradition of active, democratic (if occasionally hot-headed) political awareness and activism, so characteristic of what I personally consider the most beautiful City in the world, and the city that most deeply represent the richness of the cultural traditions of old Europe.
A city for which my affection is rekindled every single time I have the privilege to visit its beautiful galleries, museums, bookstores, and to stroll along its elegant boulevards, delightful parks, and the romantic bridges and banks of the Seine, all punctuated by architecturally magnificent palaces and beautiful monuments representing a constant reminder of the remarkable history of this extraordinary city.

Shakespeare and Company has a very particular history, being not just a famous bookstore but also a place of sanctuary and refuge for penniless aspirant writers and artists, and a center of radical cultural and political activism.
Its complicated, generous, eccentric and utterly fascinating owner, George Whitman, provided free accommodation inside the store to all sort of intriguing and unique characters: the only requirements were to be culturally active and love books, to read a given quota of books, and to occasionally help in some of the activities of the store. His objective was to create a socialist utopia strongly tinged with a deep, abiding love for culture in all of its manifestations, and an almost fetishistic affection for books.

The author of the book describes his memorable life experience when guest of Shakespeare and Company. An experience that saves him from himself and that provides an opportunity for re-thinking the values and decisions of his own life.
The owner of the shop, George Whitman, has been rightfully appointed in 2006 "Officier dans l'Ordre des Arts et des Lettres" by the French government, for his unique and important contribution to the cultural life in France. Sadly he died at the age of 98, after a meaningful life lived to the full, but thankfully he is survived by his daughter who is trying to preserve (albeit in a more polished and less ruffled and chaotic manner) the rich tradition of this unique bookstore.

From the author's words: "though far from perfect and rife with idiosyncrasies, George, with all the hope and optimism of a child, still believes he can change the world and the people he takes in at his store. In an age when it is so tempting to be cynical, this is enough to make him a hero in my eyes".
George's words: "people all tell me they work too much, that they need to make more money. What's the point ? Why not live on as little as possible and then spend your time with your family or reading Tolstoy or running a bookstore ? It does not make any sense!"

“Be not inhospitable to strangers,” reads a sign that stands at the entrance of the bookstore “lest they be angels in disguise.”

Highly recommended. An absolute must-read for anybody who has ever fallen in love with Paris and who has a personal fetish for books, who still believes in a humane alternative to the "greed is good" philosophy of the rotting and primitive model of unfettered, unregulated capitalism that still survives in few countries, and who puts higher priority to culture, intelligence and education over money and power.

"Within a week, Ablimit was in the hospital, the apartment was lost, Eve stopped wearing George's ring, and a man was dead."

Former journalist/ novelist Jeremy Mercer is broke and on the run. He leaves Canada, and ends up in Paris, where he takes refuge at Shakespeare & Co., the infamous bookstore known for its literary history and promise to house writers "free of charge in exchange for their work". (The list of previous writers reads like a who's who of literature.)

Mercer tells an enchanting story of his stay at the shop, the people he meets, and the relationships he forges there. But he doesn't overromanticize the experience: The title refers to soft time, as in soft jail time (as opposed to hard jail time). The store is not the easiest place to live; for that matter, having no money is not an easy way to live--but it could be worse. This book explores the sometimes dramatic dynamics of several creative personalities living under one roof. It is also about people finding their own way, in their own time, and in their own style. Mercer subtly entwines readers in the residents' lives, making them feel as though they are actually there.