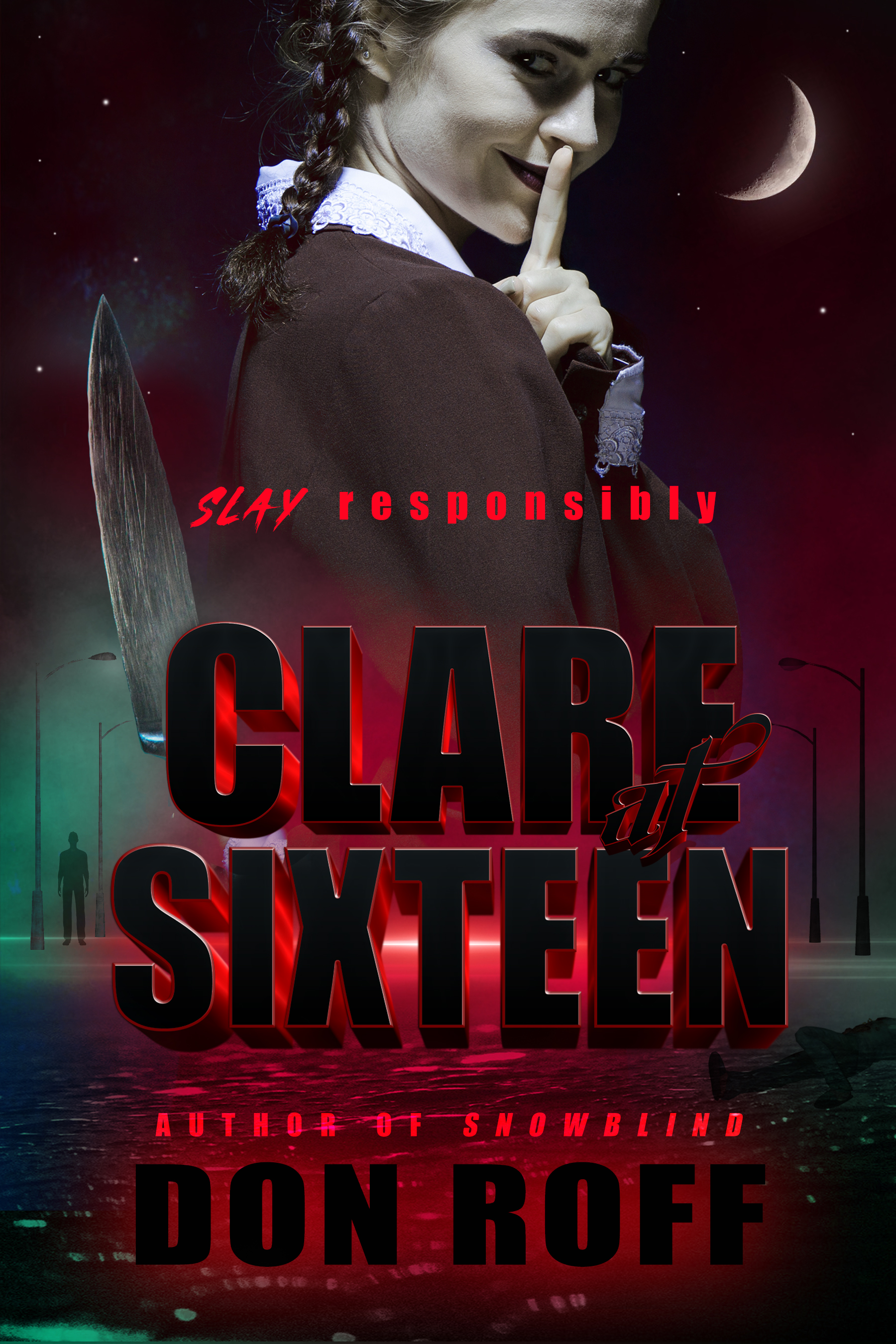 4.23
35 ratings11 reviews
Rate this book
The small town of Pickman Flats offers a bright sunny place filled with quaint shopping and wine tasting. But underneath the town's inviting exterior lies a dark underbelly, a sinister element that lurks in the shadows.

Clare is a devoted vegan who goes to Catholic high school, is fastidious in her manner, and also, well, a killer. The Other Clare takes over at the most inopportune of times. She tries to keep her inner beast at bay, but it's hard when there are so many creeps around who help to unleash it.

What secret lies hidden beneath Pickman Flats? And who is Clare really?

If you want answers, well…there’s only one way to find out—even if it kills you.

42 books103 followers
Don Roff is the author of over 16 books including–Scary Stories, Zombie Tales, Dragon Adventures, Werewolf Tales, and Zombies: A Record of the Year of Infection. His chilling suspense thriller, Snowblind, is soon to be a major film from The Traveling Picture Show Company. He is a former U.S. Army Ranger.

The only way I can describe Clare's personality is as "I'm not like the other girls" which seems like a joke as a type this, especially because she seems to hate when people tell her that, but that's honestly all she is. Of course she has a tragic backstory, of course she has been off her whole life (something we keep seeing through flashbacks annoyingly presented as scripts), of course she's a vegan who would never hurt animals like other serial killers, of course she's a good student, of course she knows krav maga, and of course perfect guys are chasing after her even if everyone seems to think that she's creepy and weird.

Everything in this story is predicable and you can see the next plot coming from miles away before it even happens; and what's up with men and their obsession with underage girls being raped? Clare is almost raped three times and we learn that her best friend was actually raped. That's a little excessive, don't you think?

And don't get me started on her friendship with Julie. For supposedly best friends, these two barely interact, which makes their friendship hard to buy. And the "bullies"? They're a caricature of any other teen book/film/tv show bully and there's nothing original about them.

One of the most annoying things about the story was the ghost of her first victim showing up randomly at some point and staying for the rest of the book. He's there to scare her at first but ends up acting as some type of conscience and the only thing it does is make her look crazier than she actually is. Her conversation, out loud I must say, with him are ridiculous and it's something that wasn't necessary at all. And the way Clare talks? It's pretty obvious that a not so young man wrote her dialogues. Her vocabulary is not one that a current teenager would use and the insults she uses are very dated, especially her ridiculous use of acronyms, which got boring pretty fast.

All in all, I wish I could take back the hours I spent reading this and good luck to everyone involved in this future film because the story is terrible and I'm sure it's gonna be dragged to hell and back, if it even sees the light of day.
This entire review has been hidden because of spoilers.
Vicki-Ann Bush
Author 24 books217 followers
March 23, 2021
A Unique Concept!

Love Clare's sarcasm and her distinct view of the world. Her inner dialogue had me chuckling and the plot left me guessing as to how everything would turn out. A well rounded story!
Tish
81 reviews1 follower
June 12, 2021
Fast-paced & funny, the most heart-warming serial killer story you'll ever read!
slashyrogue
133 reviews4 followers
February 11, 2021
This is the worst book I've ever read.

I almost stopped reading a number of times but by the time I got halfway I needed to finish so I could write this accurately.

I was very excited by the premise : Sixteen year old Clare murders bad people and protects her town.

It's not as exciting as that. Yes, she murders people but she has a split personality that does the murders for her. No she doesn't really think this is weird, or tell anyone. Cuz ya know, they were obviously bad people so why bother even though every time she murders someone she COULD go to the police and tell them. But then we'd have no story. What little of it there is.

Clare is the perfect Mary Sue. She's beautiful, vegan, knows krav maga, is super smart, too cool for you, and can do no wrong. She speaks in outdated references and even misused ones. Claire is SOOO cool. Did I mention she's cool? Okay let's see what else....oh, there's jokes about anorexia, school shootings, and rape. Also a random ghost thrown in that's never explained but I assume is ripped off from Dexter.

Most of Clare's "psycholepsy" is also barely explained beyond "lots of stuff happened to her and she's always been without feelings so...murderer." The constant flashbacks under the guise of a movie script formula really do nothing but take up space. Yes, we get it. CLARE IS CREEPY. CREEPY AND COOL. She's Wednesday Adams without the personality. We get it. Also SHE IS A SERIAL KILLER. SHE KILLS PEOPLE AND FIGHTS BAD GUYS. No she doesn't have a personality beyond that. Just go with it.

Just do yourself a favor and skip this one. Save yourself the headache and rage. This isn't fun, it's trying too hard to be something it never will be.

Thanks to NetGalley for letting me read this ARC in exchange for an honest review. 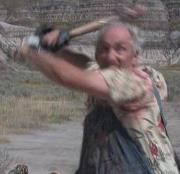 Stuart
3 reviews13 followers
March 14, 2021
I was looking forward to this book for some time prior to getting a pre-release copy to read, and it did not disappoint! Clare is that voice inside us all, that we never let take action, but that allows us to fantasize about doling out justice to the creeps in the world. And she's smart and a smart-ass in equal measure. I found myself burning through this novel with great speed, as it kept me thoroughly engaged with the characters and their stories. I also loved that the main character played Helga Ten Dorp in the school play! Deathtrap is one of my favorite plays, having played Sidney Bruhl to my wife's Helga Ten Dorp! I also love the construction of the novel. The chapters are very short, and take us through the story in such a vividly descriptive manner (through Clare's thoughts and experiences) that it feels like you are reading a screenplay at times. But I digress. I don't want to give away major plot points, so will just say that I highly recommend this novel wholeheartedly!
Amy Moreno
239 reviews2 followers
March 6, 2021
I was very excited to read this book when I heard about it. I expected "Dexter" meets "Buffy". This ended up being super fun, waaaaay cuter than it had any right to be, with enough twisted Dexter moments in there to appeal to the darkest-hearted out there. A twisted backstory, two adorable grandparents, a "what is going on here?" mystery, several "will everything turn out okay?!?!?!" edge-of-your-seat moments, a villain you absolutely want to get murdered SO HARD. Then throw in some cool music and fandom references, some smoothie recipes from Clare's cookbook like all my favorite Food Mystery genre novels do, and this ended up being a mashup of ALL of my favorite things. I could not go to sleep until I finished reading this and wrote a review. I definitely intend to buy this for my guilty pleasure, "I can't sleep and can't decide if I want to watch Buffy or Dexter" book.

A HUGE thank you to Don Roff, Netgalley and Parliament House for this ARC to review.
Nessa
499 reviews2 followers
March 17, 2021
Thank you Parliament House Press and Don Roff for the eARC! I loved this book so much I binge read it in one night. This book may not be for everybody because it covers dark topics such as child pornography, sex trafficking, sexual assault, serial killers, murder, and gore, but it's a seriously great book! I really enjoyed the writing style because chapters were short and the writing was very dynamic which made the book a really easy and fast-paced read. The main character Clare also had a very entertaining personality and it was fun to read all her inner thoughts. I can't wait for the next book!
Kate
2 reviews
May 3, 2021
An entertaining read

Despite the use of the common, yet incorrect, 'her and I' instead of 'she and I', this is a well-written novel. Clare reminds me of Wednesday Addams, and the author did this deliberately; I love the character. The only other major flaw in this can be forgiven, though the instant use of chloroform should stop being perpetuated. It felt a little lazy.

If you love a deep dive into a psychologically twisted mind with a side of sarcasm, Clare at Sixteen is for you!

Action packed, darkly disturbing, and hilarious, I found this book highly entertaining from start to finish.

An addict of serial killer stories will find this richly satisfying.

Clare is witty, demented and not to be messed with.


Rebecca J
1 review
March 25, 2022
My long time friend Gary sent me this book,
To read,he knows the writer,
It was so dang good,I couldn't honestly put it
Down,iam never going to make it waiting for part two.I totally am in love with Clare,shes so
Smart,and tuff.
Connie Dodd-gilliland
5 reviews
March 24, 2021
Awesome read!

I really enjoyed this book. This is the first I have read it Roff's but I will definitely read more!
Displaying 1 - 11 of 11 reviews