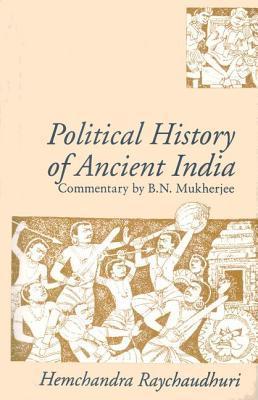 Political History of Ancient India: From the Accession of Parikshit to the Extinction of the Gupta Dynasty

3.83
23 ratings2 reviews
Rate this book
Political History of Ancient India, first published in 1923, has been established as a work of sound scholarship and has been the standard textbook for several decades. The eighth edition, updated with all the latest research in a separate commentary by Professor B.N. Mukherjee, will prove
indispensable to scholars and students of early Indian history.

3.83
23 ratings2 reviews
5 stars
6 (26%)
4 stars
10 (43%)
3 stars
5 (21%)
2 stars
1 (4%)
1 star
1 (4%)
Displaying 1 - 2 of 2 reviews
Lasic
93 reviews
May 5, 2020
Political History of Ancient India: From the Accession of Parikshit to the Extinction of the Gupta Dynasty is important because it tries to present the history of India before the rise of Buddhism in somewhere 6th Century BC, which other historians dismissed as incapable of arrangement in chronological order.
Riju Ganguly
Author 12 books1,328 followers
January 10, 2021
This book is an example of astounding scholarship. It was penned at a time when the study of Indian history was in its rudimentary stage. Especially for ancient India, in absence of archaeological evidences, the reconstruction of history had seemed to be an impossible task.
The author had undertaken this seemingly impossible task by analysing the available literary evidences. This literary evidence didn't correspond to the type that has been in vogue since Alexander's days and were followed up by other Semitic traditions. Instead, most of it remained captured as myths and religious literature.
These mythical and heroic or epic literature had been deemed unreliable as a historical source. Even now several historiographical schools denounce such material as imaginary or too vague to be relied upon. But Sri Raychaudhuri had extracted verifiable details, compared them with such points in ancient Indian history for which there are independent sources, and had described the various dyntasties with specific timelines.
While describing the political history, with emphasis upon the northern and central Gangetic plain, Sri Raychaudhuri had described various institutions. Coupled with the theories of kingship promulgated in religious as well as historical texts, the study of these institutions also showed the various forces operating within the society at a given point of time. In that sense, this book transcended its aimed foucs of 'political history' and became something greater.
The maps and lists included herein helps the reader to appreciate not only history, but the geography of the sub-continent— which had played an immense role in determining the contours of events and people.
Yes, the book has become rather dated as a result of recent researches and discoveries. Yes, despite detailed notes being added by B.N. Mukherjee the book remains rather dry.
But it remains a standard of diligence, critical scrutiny and methodology in terms of interpreting mythical and epical references to unearth earthly history.
Highly recommended.
Displaying 1 - 2 of 2 reviews