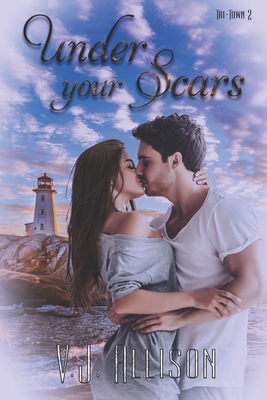 4.75
8 ratings9 reviews
Rate this book
Alexis has that special something about her that Seth can't fathom. His friend Mirabelle's new employee is even prettier than the merchandise she sells. Too bad she's distantly polite when he tries talking to her.Alexis is attracted to Seth, but she's in hiding from her past and her mistakes. Getting involved with the one person she's attracted to could blow her cover. When they're forced to work together, their libidos ignite. Alexis is terrified to open up and give in to her feelings for Seth. If he remembers that night five years ago, he'll never speak to her again. It becomes a question of whether Seth will expose her and force her to keep running, or if he'll help her face her past.

V.J. Allison was born and raised in southern Nova Scotia, Canada, and her work reflects her strong Maritime roots. She is a stay-at-home mother to a son on the autism spectrum, married to the love of her life, and “mama” to a rescued Maine Coon cat named Marnie. She has been writing various stories of novel length and short stories since her school days, and sees writing as a vital component to her life.

Her first paranormal/horror romance, Eternity's Gamble, was released by Decadent Publishing on October 1, 2021.

​​​​​​​This self-proclaimed geeky rocker chick is a warrior and advocate for various chronic illnesses including Occipital Neuralgia, Trigeminal Neuralgia, Diabetes, Migraines, and Glossopharyngeal Neuralgia. She is also an advocate for the prevention of animal cruelty and is a voice for Autism Awareness.

4.75
8 ratings9 reviews
5 stars
6 (75%)
4 stars
2 (25%)
3 stars
0 (0%)
2 stars
0 (0%)
1 star
0 (0%)
Displaying 1 - 9 of 9 reviews
Jean
2,444 reviews15 followers
July 15, 2020
Omg i love this book so much as it is so beautifully written about what secrets are beneath us and how we deal with those situations. I read V J Allison's first book and that got me addicted to reading more.There are twists and turns that have you turning the page's to see what will happen next. Alexis and Seth have great chemistry but with all of her secrets will Alexis let Seth in or keep him at arms length so that know body finds out what she is hiding.V J Allison is a brilliant author and writer and i can not wait to read more of her books. I definitly recommend you read this book and others by her and you will not be disappointed.

I received a free copy of this book via Booksprout and am voluntarily leaving a review.
Krista
71 reviews2 followers
July 15, 2020
Vj brought all the elements of a romance to life in this story!

Alexis and Seth have a past, one he doesn't remember, expect in his dreams. Alexis doesn't let on that she knew Seth because she was trying to keep her past in her past.

Seth is haunted by memories of a girl he cant remember. He has panic attacks when the memories hit. He was hurt by his ex and has a hard time trusting people.

They start off as friends but again, chemistry cannot be denied. After the truth comes out, fireworks soar with these two.

A must read for any romance reader out there!
Alyssa
694 reviews2 followers
July 18, 2020
A hot quick read that I found myself wishing for sequel. Alexis and Seth make such a cute couple He doesn't remember her from 5 years ago, and she is running so hard from her past. All I wanted to do was help her. The twist is that if Seth remembers her from the past and the mistake she unfortunately made, will he still want to be with her? Or keep her running for the rest of her life? I can't wait to read more form V.J. Allison

The chemistry, sweetness, and twists in plot kept things interesting. Add in drama and passion and you have a good read.

This review has been voluntarily submitted for your consideration.
SEng
2,225 reviews2 followers
July 18, 2020
This is the story of Alexis and Seth. They are attracted to each other but Alexis needs to stay away from him. He doesn’t remember her from five years ago but she is definitely running from her past. What happens when he remembers? I enjoyed this romance with its many twists. I received an arc of this book and am voluntarily leaving a review.
Sheila
3,620 reviews19 followers
July 19, 2020
Alexis and Seth share a past that he does not really remember but has flash backs. This is an emotional story that deals with drug abuse and physical abuse by her ex boyfriend. Enjoyed reading what this couple went through in order to make a strong relationship with each other.
Penny Leidecker
2,404 reviews25 followers
July 9, 2020
This is a beautifully told story about Alexis and what she’s had to endure to get to this point. She works for Mirabelle at her boutique and they’ve become friends. Mirabelle’s husband, Blaine, and his best friend and business partner, Seth, are doing renovations to expand the boutique. I won’t leave any spoilers, but I recommend this book that shows that you can leave the past behind, but secrets will find a way of coming out. Grab your copy and see what happens and to see if Alexis will finally get her happily ever after.

I received a free copy of this book via Booksprout and am voluntarily leaving a review.
Stevie D Parker
Author 4 books48 followers
October 11, 2021
This was the first novel I read from VJ Allison and will absolutely be reading more of her work. Not only did she do a fantastic job at making you feel like you were in every scene, but also getting a deep look inside each character’s mind. Uniquely written, if you’re looking for a fast paced romance, I highly recommend this one. I wasn’t able to put it down!
Displaying 1 - 9 of 9 reviews