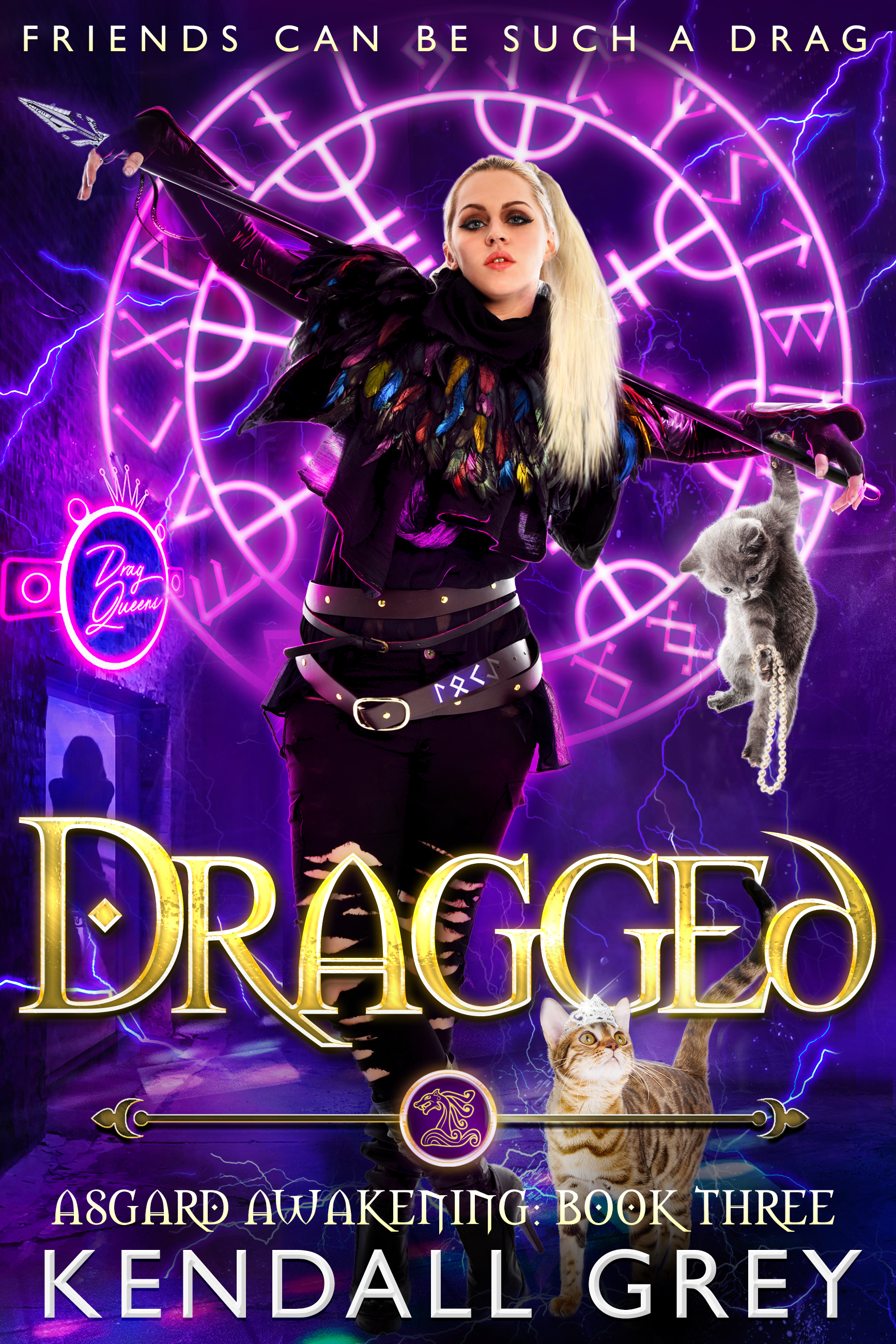 I still have boobs.

I’m also suffering from a health issue that has a 99.43% chance of permanently ending me (assuming the Norns don’t get to me first). And I can’t find my immortality rune. And the runes I did recover are playing fisticuffs with each other. And I’ve been cursed with an inability to lie. One by one, my new friends are turning out to be old foes. Oh, and did I mention I accidentally on purpose destroyed Odin’s gazillion-dollar business investment, and now he’s sharpening his spear for me too?

But I finally got a lead on another rune. With a trip to a drag queen pageant in San Francisco in my future, I just have to convince my friends Gunnar Magnusson, Freddie, and Darryl Donovan that they’re destined to change the world in dresses and heels. That would transform this terrible Tuesday into the funnest Frigg-ing Friday since Ragnarok.

29 books1,611 followers
A whale warrior, marathoner wannabe, and vodka martini aficionado, Kendall Grey is calm like an F-bomb*. She writes books about fierce women in genres ranging from erotica to urban fantasy comedy. Her aliases include Kendall Day (FALLING FOR MR. SLATER) and Seven Slade (COMING OUT).

Kendall lives off a dirt road near Atlanta, Georgia with her dashing geek husband, a one-eyed Dachshund that thinks she's a cat, and an incorrigible yet adorable mutt whose ice-blue eyes will steal your heart and hold it for ransom.

You are going to LOVE Natalie Duke's take on Loki in the third book in the Asgard Awakening series. She has outdone herself again as narrator, and I can't wait for you to hear this book told through her voice. Stay tuned for the audiobook to go live any day! In the meantime, you can read DRAGGED on ebook at the following retailers.

Order a signed paperback of DRAGGED (or any of my other books): https://howling-mad-press.square.site

Just finished it. I love you Kendall Grey!

Abi
1,928 reviews
March 25, 2020
I started this somewhere around ten or eleven at night, and finished around two in the morning. It was so freaking awesome! Loki is a fun, sympathetic, and interesting (if slightly frustrating, because ) character to read about, and I'm so glad that Kendall said we're only waiting until August for more! :) Yay! This installment in the series, book three of four, brings back another person from Loki's past, involves some epic drag queens, and just generally was a complete riot of awesomeness. Seriously, it was fabulous! Also, Gunnar and Loki . In all seriousness, if anyone is a fan of gods, reincarnation, Norse gods, hilarious gender bender type stories, taking chickens, talking cats, or Loki, read this series. You won't regret it! 4.5 stars.

This series is absolute perfection and I challenge anyone not to love it.

There is just so much to love!

Loki is amazing. They are totally crazy, chaotic, reckless, sweet, vulnerable, loveable and just so much more.

Gunnar Magnusson (I still love that she refers to him by his full name) is so refreshingly different more the normal male leads and so damn loveable, too.

The side characters are amazing and the friendship is so true, including an array of hilarious animal side kicks.

The world building is brilliant and such an interesting concept and the focus of one book per Loki finding their rune works really well. Their character growth has been phenomenal.

In addition to all of this wonderfulness, you have such positive and interesting, but not preachy, messages about gender. Loki is a man reincarnated in the body of a woman, with memories of being a man. They don't know how to identify themselves regarding gender, but both Loki and the reader xome to the conclusion it doesn't matter. As with many of the reincarnated Gods, they are often in bodies of a different gender. It hammers home the message that the person you are is not defined by gender and it is stupid that we focus on it so much. But all of this presented in such a gentle way that it is very effective.

Loki is just such a blast and I think they're one of my favourite characters ever.

You have to read this series! The drag plot line in this one is just brilliant!
Jessica Olson
37 reviews
March 27, 2020
She’s done it again! Loki had me hooked in the first two books and kept it up all the way through this one too. Her shenanigans are always getting her into interesting situations and what better place for a god that specializes in mischief than a drag show?! I was cracking up throughout and reached the end far too soon. That cliffhanger left me begging for more!
Natalie
2,332 reviews32 followers
March 26, 2020
More mayhem, talking chicken and cats. The casino is down and now it’s onto a drag contest. Just as crazy as the previous. Ends on a cliffhanger. Next one is the last, looking forward to it.
Christina Spicer
110 reviews
March 25, 2020
I loved this book! The characters are hilarious and so much fun to read about! I love this author and her writing style I love the humor in the book and the way the story unfolds! This is a series and does a pretty good job of explaining what happened in the previous books but I would recommend reading them in order because they are amazing and so dang funny! Loki and Gunnar are my favorites and I love all of the supporting characters and their godly behaviors. I love mythology and this book is so good because of the stories and research that was put into this book! The talent of this author shines in everything she writes and I cannot recommend it more!
Karen
44 reviews
March 31, 2020
Love, love, love this series! So smart and funny!

Part of the fun is figuring out which Norse gods, goddesses, or other legendary people are kicking about in Midgard with or without knowing their real selves. This third book was both tremendous, exhilarating fun and crazy drama, not a dull moment. Can’t wait to read the last book, but gonna be sad when I have ‘cause this Adventist is just too much fun to want it to end.
Annie (Annie's Readingtips)
428 reviews6 followers
February 17, 2021
This is the third book in the fabulous Asgard Awakening series, and just like the other books it was such a fun and queer retelling of the Norse mythology set in the 21st century. This time, Loki’s hilarious mischiefs involved some absolutely epic drag queens, an earthquake-causing orgasm and more friends turning into reincarnated Gods.

The story follows the former Norse trickster God Loki, who has been reborn as a woman, and his friends, Freddie and Gunnar Magnusson, as they try to track down Loki’s lost runes. After the mayhem they caused in Las Vegas in the second book, they are now heading to a drag queen pageant in San Francisco, where the evil Asgard Awakening’s actor Damien Drakkar is head of the panel. In order to get the rune back that Damien is keeping, Loki tries to seduce him but it all misfires heavily. But on a positive note, apparently Gunnar Magnusson looks even more amazing in a dress and heels…

I’m so in love with all the characters and I absolutely adore the fresh take on gender that is so well executed and unique throughout this series. The way Loki swapped between pronouns without losing his identity was so well done. In this installment, Loki gets to discover what it’s like to live in a man’s world.

“But now that I’m a woman, I’m not very fond of this unwritten rule.”

Loki also has to struggle with the inability to lie, which is a hard lesson for a former trickster God, and the guilt for betraying his friends by keeping their real identities as reincarnated and former foes a secret. Even though there was so much going on, the story was a bit slower in this book and at times it felt like a build-up for the finale. But it was nevertheless a fantastic read, and I can’t wait for the final installment when all things will be revealed and, hopefully, Loki can have his true happily ever after with Gunnar Magnusson in his original identity (keeping it a bit vague here not to spoil anything…).

Thank you to the author Kendall Grey for the free review copy. I am leaving this review voluntarily and all opinions are my own.

Loki and the boys head to San Francisco to enter a drag contest and try to steal Rune # 3 from the jerk who plays Loki on Asgard Awakening. I don't want to say too much because spoilers and I really want you to find out all the twists for yourself. I will say, though, that I hope Loki comes clean with Gunnar and he is okay with Loki hiding the truth for a while.

Macjest
1,130 reviews6 followers
December 8, 2021
Moving on to the third book in the series about Loki who has come back to life as a woman. In this adventure, Loki and her/his friends end up in San Francisco so that the boys can compete in a drag queen contest. Loki hopes to retrieve his third rune at the same time. The story dragged (no pun intended) at times and I wished that things would just start moving along. Having said that, when things happen, they are incredibly funny. Once again, a warning. If you are easily offended, this is not the book series for you. If not, enjoy!
Rubell
149 reviews1 follower
May 17, 2022
HOLY THUNDER

The cliffy here gives me anxiety...thank goodness the next book is already available!

Loki causes him/herself more problems but also discovers why and how he became so self destructive. Gunner keeps dealing with more (but not yet ALL) of Limits bs. Freddie...well, my suggestion is to read this crazy series!!!!!
Steve Trelfa
48 reviews
January 27, 2022
Move over RuPaul there a new queen in town!

Another hilarious installment of Lokis adventures in finding their runes. Any fans of the genre will love this mix of Norse mythology and Drag culture

Bring on the next one
Betsy
76 reviews
September 30, 2020
Another great episode

I really like this continuation of Loki’s adventures. This one takes Loki and the gang to Las Vegas where they join a drag competition. I wish I could see that with my eyes, especially the last number! This book is funny of course, but it also has tender moments. This series is for anyone who loves an original story filled with humor, good character development, a little mystery, a little fantasy, and a whole lot of fun!
Amanda
591 reviews6 followers
September 26, 2020
Um what the Hel?!? How can you leave it there when the next book isn’t out until December?? I have needs!! Like I needs to know what happens!!
Displaying 1 - 16 of 16 reviews